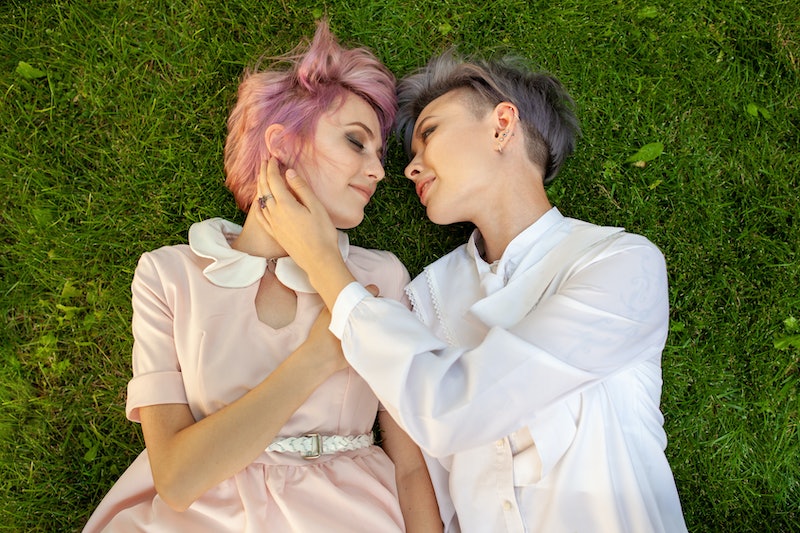 For the first time in roughly a year and a half, Venus is in retrograde again, from October 5 to November 17. In astrology, Venus rules love, beauty, pleasure, and money, and it's the planet most commonly associated with how we behave in relationships. Accordingly, you may be wondering what Venus retrograde means for your love life, especially since Venus is the planet which spends the least amount of time in retrograde.

"Going retrograde" refers to when Earth "laps" a planet in its orbit around the sun. Even though both Earth and Venus are moving in the same direction, as we pass Venus, it appears to move "backwards" through the sky. The period during which planets appear to move backwards in relation to us are known as their periods of retrograde.

In general, planetary retrogrades are a time for reflection, which is why they're so frequently dreaded. Most people are inclined to grind forward through struggles, but retrogrades demand the opposite. It's why people tend to feel like things always go wrong during a retrograde — they're fighting the universe's built-in check-in system by plowing through decision-making instead of taking a step back and assessing their circumstances. Like Mercury retrograde, Venus retrograde is a bad time to start new things like relationships or commitments to marriage. But remaining open to the feelings it stirs up are key.

1. You May Realize A Partner No Longer Wants To Be With You

Venus retrograde is the perfect opportunity to check in with yourself about what you need in relationship — and honestly assess whether your needs are being met. Astrologer Linda Furate tells Bustle, "This is an excellent time to look within to see how our actions and behavior offer us joy and happiness. Are we holding onto a relationship or possession that no longer serves our higher good? During the Venus retrograde, we may find that a love interest has moved on or no longer wants to be in a relationship."

2. Give Yourself Permission To Let Go Of Bad Relationships

The flip side of potentially being heartbroken, of course, is being the heartbreaker. You may realize someone no longer wants to be with you, but you may also realize you no longer want to be with them. "Get honest with yourself and look at your patterns (people, places, things) that sabotage your happiness," Jess Domain of GiftedAstrology.com tells Bustle. "Give yourself permission to release them."

3. Thirsty Exes May Come Out Of The Woodwork — But It's Not A Bad Thing!

For all the times you strictly deny yourself the possibility of making up with an ex, Venus retrograde might be the one time it's productive to do so. "When Venus is in retrograde motion, it's possible for an old flame to come back into our lives. You may receive a phone call or text from this person or may come into contact with them while out and about," Furiate says. "It may be an ideal time to rekindle a former relationship. Even if the relationship fizzles once Venus is direct, often there are many valuable lessons learned from the opportunity to revisit old feelings."

4. Beware The Urge To Win Somebody Back Using Presents

In addition to being a bad time to accept a marriage proposal or start a new relationship, Venus retrograde is a bad time to try and win someone back using an expensive gift. It's a virtually surefire way to wind up regretting your actions. If a flame is going to be rekindled, it's probably going to be because that person came to you. "It may be beneficial to welcome and accept any delays," Furiate says. "We must learn patience if we are to be rewarded with the abundance and love we seek."