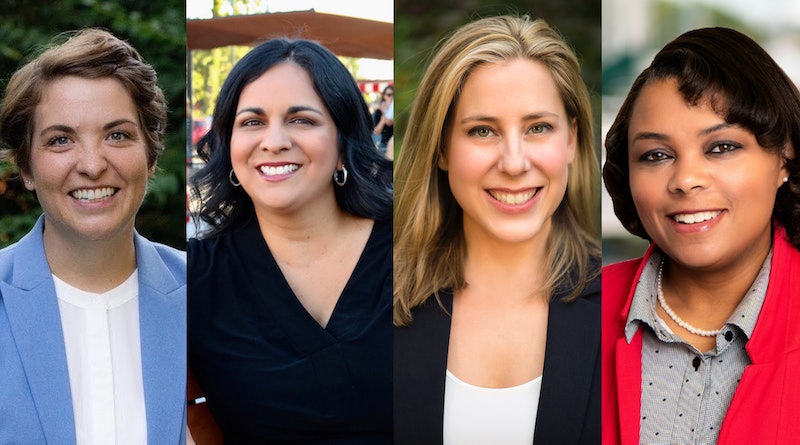 Leading up to the Virginia Democratic primary election, Vangie Williams would work on her congressional campaign until midnight most nights after grinding away at her full-time job as a strategic planner. She'd then switch gears to work on her doctoral dissertation until an obscene hour most people only see as they stumble home from the bar on Friday night. She's among the women running for office in 2018 with student loan debt, a distinction she believes highlights how hard she's fought for the American dream.

"When you have to work hard for your education and you have to pay for that education, you understand that it’s your way out of maybe a socioeconomic situation, or career advancement. I’ve worked hard for every level of my career," Williams tells Bustle. "I want to make sure that people understand that as a black woman, I have to strive a little bit harder than the average white male or the average white woman."

Williams currently has $186,000 in student loans that are in deferment while she's still working on her degree, though she makes payments to keep that number from ballooning with interest. She put her doctorate on hold after winning her primary in June so she could put all her energy behind defeating Republican Rep. Rob Wittman in Virginia's 1st District. But she plans to finish her doctorate whether she's elected or not.

More candidates have been vocal about their student loan debt on the campaign trail this year, in part because of the swell of Democratic candidates who want to portray themselves as a woman of the people, according to Michele Swers, professor of American government at Georgetown University. (This hasn't prevented the topic from becoming a point of criticism, as in the case of Georgia gubernatorial candidate Stacey Abrams.) But candidates drawing on their debt as a talking point don't detract from the fact that their loans make running for office more financially risky.

It’s already difficult for a political challenger to defeat an incumbent because a veteran lawmaker will have three to four times the amount of campaign funds, according to Swers. "People with student loan debt obviously aren’t able to draw on personal savings to be able to fund their campaign," she says.

While this is true of anyone with debt, Swers says women are more likely to be political challengers since men make up a disproportionate number of American lawmakers at every level. Women are also more likely to have student loans; women hold nearly two-thirds of America's outstanding student loan debt, according to the American Association of University Women.

Liuba Grechen Shirley quit her consulting job to establish a viable campaign challenging veteran Republican Rep. Peter King in New York's 2nd District. Despite not having a salary for almost two years, she still pays $1,000 a month toward her roughly $100,000 in student loans. The 37-year-old mother of two successfully petitioned the Federal Election Commission to allow political candidates to use campaign funds for child care earlier this year, but she says she's struggling to make ends meet nevertheless.

"There’s a reason we have so many millionaires in office. You have to be independently wealthy to be able to run for office," Grechen Shirley tells Bustle. "You’re working 24/7 and you have no salary — it’s really difficult to also continue to pay your bills."

Just one in 10 members of Congress holds student loan debt, by Roll Call's count, either for their own education or for their kids', while 153 House members and 50 senators are millionaires on paper.

Because so many congressional candidates come from wealth, Williams' decision to work full-time while running is rare. It's less so for women running at the state level, however. Gayatri Agnew, a 37-year-old Democrat vying for a seat in Arkansas' state House, plans to continue working as director at a major corporate foundation even if she wins on Nov. 6. She just recently got her student debt under $100,000 after throwing her last yearly bonus at her loans.

"My student loan is the ball and chain that I drag around," Agnew says.

Quitting her job to run for office while still paying off student loans simply wasn't an option, she says. And since serving in the Arkansas legislature is a part-time gig that pays less than $50,000 a year, according to data from Zippia, a career guide company, she plans to take unpaid leave from her day job during legislative sessions should she win.

For women in other parts of the country vying to serve on a state legislature, the financial realities can be even more challenging. Josie Raymond, a Democrat running for a seat in the Kentucky state House, would receive a salary of roughly $15,000 if elected, per Zippia. Although she's paid off all of her own student loans, she helps her husband with his loan payments that come in at a minimum of $800 a month. Like Agnew, she plans to keep her job at the University of Louisville if elected next month.

"The things that are supposed to scare you about running for office... like your name’s in the paper, and your kids’ names are in the paper, your age is in the paper, you’re criticized — all of the scary things, and they are scary — those, to me, are secondary to the financial risk of running," Agnew tells Bustle. "That’s why working moms don’t run, because it is a lot of risk to take on."

The candidates Bustle spoke to believe electing more people with student loan debt would lead to more policies aimed at combatting America's student debt crisis. At the state level, Agnew wants to push for stronger regulations for student loan lenders in Arkansas. Williams and Grechen Shirley both want to champion legislation to lower interest rates for students, as well as drive down tuition costs for public universities.

"So many average Americans, our voices are not being heard," Grechen Shirley says. "That’s what I think is the most exciting thing about this political election cycle, that so many working Americans from diverse socioeconomic backgrounds, from different career backgrounds, have said, 'Enough is enough.'"

More like this
Why Eurovision 2023's Host City Won’t Be Revealed For A While Yet
By Sam Ramsden and Rachel Mantock
Are John Legend & Kanye West Still Friends? The Singer’s Latest Update Is Candid
By Brad Witter
What Is Megan Thee Stallion’s Net Worth? The Traumazine Hitmaker Isn’t Worried About A Budget
By Hugh McIntyre
Gemma Collins' Net Worth Is Only Going Up
By Catharina Cheung
Get Even More From Bustle — Sign Up For The Newsletter