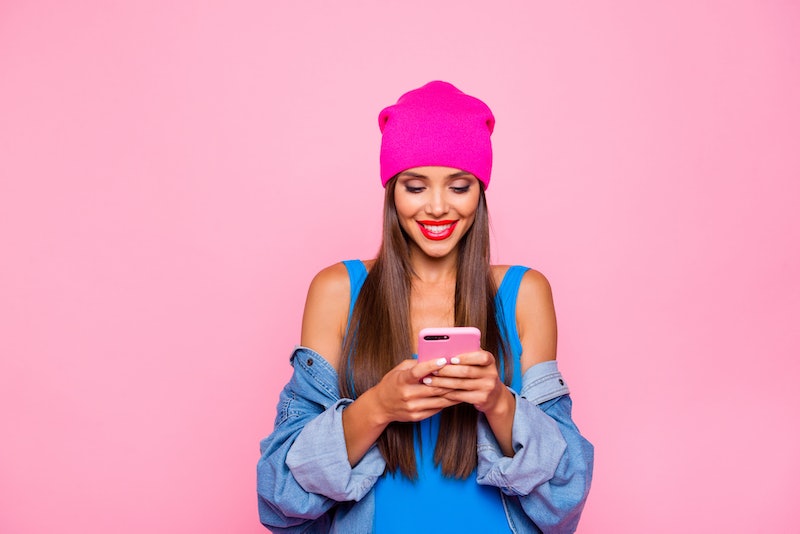 It takes a certain level of cleverness and boldness to send someone a direct message on Instagram for romantic purposes, and according to astrologers, there are certain zodiac signs that are more likely to slide into your DMs than other signs, based on their astrological personalities. Some signs are far too traditionally-minded to use a social media platform like Instagram to start a romantic connection, but other signs see the act as a straightforward, even genius way to go after what they want without wasting time. Why go through the channels of getting in touch more traditionally when you can just instantly appear on someone's screen, and be able to see when your message has been received? Dating apps are so 2018.

The signs that are most likely to show up in your inbox are either whimsically minded, or hyper-efficient. These qualities can be traced back to zodiac personalities, so Bustle talked to Jeanna Kadlec, the Sanctuary app's resident astrologer. Without hesitation, Kadlec instantly knew which signs would be most likely to make the brazen move, and as someone who is a sign listed below, and who is currently dating the person whose DMs I slid into three years ago, I can tell you her predictions are spot-on. There's just something about each of these's sign's astrological build up that makes them drawn to new and exciting ways of communication.

"If you want to talk about the bold, impulsive, DGAF DM slide, then Aries is first on the list," Kadlec tells Bustle. Aries is fearless: the warrior on the front lines who absolutely goes after who they want. So if they see you on Instagram and are interested you, you'll know and there will be a DM to prove it. "They don’t wait around, so don’t overthink your response. Embrace that energy and jump on the opportunity to seize the moment with them," Kadlec suggests.

Sags will slide in to your DMs, but according to Kadlec, it's not necessarily for romantic reasons. "They’re the sender of the classic 'here for the party' DM slide," Kadlec explains. "Sagittarius is known for a love of exploration, which means roaming around as many Instagram profiles as possible. The message in your inbox is cute! Just know they’ve probably sent a few other people the same one," she goes on to say. So long as you're aware of this and proceed with caution, it's OK to take the bait. But for your own good, Kadlec says not to "try to lock them down, just appreciate their forwardness and willingness to roll with the punches."

"Capricorn is the master of the single-minded pursuit. When a Cap wants you, you will know it," Kadlec explains. "There probably won’t be frills or even, necessarily, that much flirting. This is a direct approach to flirting, with an actionable 'Do you want to get drinks?' DM." Caps behave this way because their time is valuable, "so if they want to spend time with you, that’s a big deal." Another thing about Caps: if you're not clear that you're interested, they will write you off quickly.

"The person who is absolutely going to slide into your DMs and chat forever… but probably without following through? Gemini," Kadlec tells Bustle. This sign loves to flirt, but they get easily distracted. "You’re going to have to be the one to actually nail down a time and place. They bring other gifts to the table, like a constant stream of memes, links, and enthusiasm," Kadlec explains. So if you're wondering why a Gemini got the conversation started, but abandoned the chat mid-way, don't take it personally, just make the next move.

If you've recently received a message from one of these signs, now you have a bit of insight into why their astrological disposition helped them decide to get in touch with you that way. At first glance, it might seem too casual or too direct, but now maybe you can see that it just seems the most logical for these signs, and they don't mean anything by it.