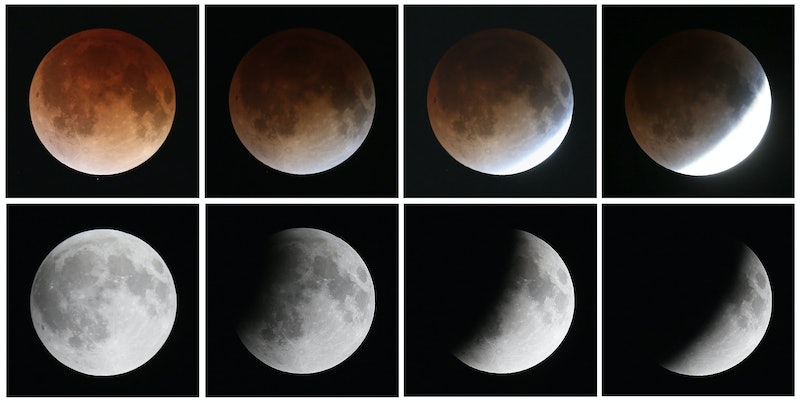 Fellow lunar-loving folk, gather round. 2019 is apparently here to whip our lil' moon-worshipping selves into shape, because we've got not one, not two, but a whopping three consecutive full supermoons happening in a row in 2019. This unusual succession begins with the full blood moon in January, followed by the full snow moon in February, and finally wraps up with the full worm moon in March. And as you can imagine, with the first three full moons of 2019 being supermoons and all, the energy we'll all be experiencing is going to be intense, and we can expect much to be revealed.

A supermoon is a term used to describe a full or new moon that takes place when the moon is at a particularly close proximity to Earth, and it's believed that these close-to-home luminaries can have a bigger-than-normal impact on our emotional state. Bustle spoke with astrologer Lisa Stardust, who shares, "Supermoons mean the Moon is in close proximity to the Earth and have a greater pull on us and our emotions." In that sense, they're pretty aptly named — supermoons can definitely indicate super-strong FuLL MoOn FeeLz, that's for sure.

Supermoons are said to have a direct effect on the ocean's tides, making them extra-high due to the supermoon's strong gravitational pull. If the placement of the moon can have a measurable effect on the world's largest body of water, then surely it isn't too far-fetched to think that they might have an affect on us measly humans, right? "Don’t forget — the Moon controls water and tides — and living things are mostly made of water," Stardust reminds us. That all said, we can definitely expect to feel the lunar tides shifting within ourselves during this succession of intense full moons, so prepare to feel extra emotional and in tune with your feelings.

Same goes for psychic feelings and intuition: "[D]uring a super moon you might have an intuitive feeling that you are getting some kind of 'upgrade' in consciousness, or that something is shifting," explained psychic Natalia Kuna on her site. "So stay aware and see how this energy plays in your life. Super full moons can make people feel really restless, as they are releasing old issues from the past that are coming up to the surface in a big way." Be kind to yourself during these transits, because these luminaries are likely to bring up a lot of heavy stuff, and our sensitive souls are going to be feeling it. Hard.

And these luminaries aren't just significant because of how very close they'll be to our home planet — each of the three supermoons will rise at exactly 0 degrees in their respective sign, which is pretty significant. If you're not sure what that means, each sign has 30 degrees (0 through 29), and as celestial bodies such the moon move through the zodiac, they do so degree by degree. When the moon is in a sign at 0 degrees, it means it's in the sign's very first degree and has just crossed over into its territory — meaning these moons will be absolutely buzzing with the energy of their ruling signs. "A luminary at 0 degrees in astrology, is considered a critical degree," explains Stardust to Bustle. "The critical degree absorbs the full energy of the sign."

During these super full moons, expect everything to be illuminated — both literally and figuratively. Secrets that were previously shrouded in shadows are likely to come to light. And the parts of ourselves that we prefer to hide away in the darkest corners of our psyche? Prepare for those come forth, as well. "Imagine a child wandering aimlessly in the light of truths, seeing things which are normally hidden. Sounds scary, right?" continues Stardust. "The critical degree during the eclipse will being skeletons out of the closet, as well as unmasking our fears."

This trio of supermoons is truly offering us all an astrological opportunity to clean those heavy, emotionally-burdensome skeletons out of our closets, Marie Kondo style — so don't run from the seemingly-scary truths that may emerge during this period. If a particular lunar illumination doesn't spark joy, just pick it up, come to terms with getting rid of it, and start moving forward. "[W]e can also look our fears in the eyes and release them," shares Stardust. "We can realize we aren’t afraid of what we thought we would be."

Allowing all the supermoon-fueled intensity to empower you rather than freak you out gives you a major chance to spiritually clean house — and the critical degree in which each of these moons will fall in only further supports that chance at a new beginning. Bustle spoke with astrologer Emily Newhouse about the upcoming succession of supermoons and their placement, as well. "0 degrees is very significant. The fact that there will be [3] full moons RIGHT at 0 degrees ... is the universe pushing for change and new energy," she explains to Bustle. "Because what is 0 degrees? It’s the first degree of a NEW sign. [These] are critical degrees. They’re special. They’re like birth and death. We are being asked to be reborn."

The parade of full supermoons begins with the January 2019 full moon in the fiery sign of Leo on Jan. 20. "For 0 degrees of Leo, the themes are drama, passions, devotion, and truth," explains Stardust. This luminary also happens to mark a total lunar eclipse, which is going to make us feel things with an even deeper intensity. "The eclipse is a lunar eclipse, the Moon will shine its light bigger and brighter than ever," explains Stardust to Bustle. "Being it’s a Supermoon, we will see emotions, situations, and people clearer. Things will come to light and truths will be revealed." All in all, every zodiac sign should put on their spiritual cleaning gloves and prepare to face the many truths that are being illuminated by the powerful light of these supermoons. The first few full moons of 2019 are bound to bring loads of energy, intensity, and potential for growth — so let's plan to use the vibe to our advantage.