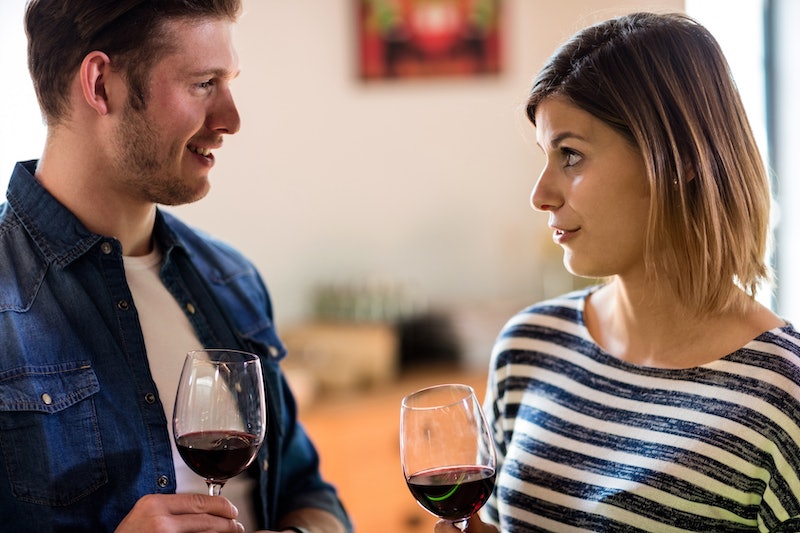 Money is a feminist issue — and yet, women are still reluctant to talk about it. According to a recent Bustle survey of more than 1,000 Millennial women, more than 50 percent of people said they never discuss personal finances with friends, even though 28 percent reported feeling stressed out about money every single day. Bustle's Get Money series gets real about what Millennial women are doing with their money, and why — because managing your finances should feel empowering, not intimidating. Today's topic: what money conversations couples should have.

When it comes to what couples fight about, money is a reoccurring culprit, which makes sense. Not only is it something that everyone has to deal with, it's an incredibly incendiary topic. Some people have it, some people don't, some like to save, some like to spend — and it affects so much of our lives that it's easy to get defensive about. But you need to be open and honest about money. Partly because it's just an essential part of being an adult in the world, but also because, if you're in a relationship, you're going to want to sort stuff out sooner rather than later.

"Money is the number one thing that couples fight about," Emily Bouchard, a certified money coach, tells Bustle. But, unfortunately, those awkward conversations need to happen. Maybe you and your partner are on the same page, maybe you're not. But at some point it's going to put some stress on your relationship, you it's best to be honest as soon as possible.

Here are the conversations you need to have with your partner, because financial fluency can prevent so many fights along the way.

You need to be open about what your situation is now — the good, the bad, and the ugly. If not, as you and your partner become more and more connected, one of you may feel compelled to snoop. Not good. "When you feel compelled to snoop, you’re acting from fear, doubt, insecurity and distrust," Bouchard tells Bustle. "These all erode the core foundations of love and trust that support a relationship in being solid."

Instead, try being as open as you can about your debts, your income, your spending habits. Your partner should be too. Then you're not second guessing and resenting each other.

Everyone is different when it comes to money — and sometimes how much you have matters less than your attitude toward it. People who save often get frustrated with people who spend, even if the ones spending have the money to do it. Bouchard talks about the eight money types and how they can affect relationships. Learning which type you are — and your partner is — can save you a lot of frustration in the long run.

"Knowing the characteristics of these archetypes is essential to understanding what drives them and has them make the decisions they make with money — like avoiding opening bank statements or jumping into a get-rich-quick scheme — and what you can do to shift those behaviors to more successful outcomes," says Bouchard.

At some point one of you isn't going to like the other's attitude or behavior with money. Something about it will niggle one of you. And you need to talk it out.

"The worst thing you can do for your relationship is withhold how you’re feeling, especially about money," says Bouchard. "The problem is, we don’t trust ourselves in how to have those conversations in a way that brings us closer, so we tend to avoid them." But that won't solve any problems.

"When you keep ignoring the small red flags and brush them under the rug, they begin to pile up and create a huge mound between the two of you that you stumble over and avoid even more, making it that much more difficult to bring up." So as soon as you feel something brewing, have the conversation.

“Talking about money is immensely important,” Priya Malani, co-founder of Stash Wealth tells Bustle. “Studies show that spending habits and money decisions are a very clear indicator of your values and priorities in life. So if you and your partner have vastly different spending habits and you don't have a system in place to manage the difference, it's likely there will be conflicts in other areas of life as well.” And this is never more obvious than when it comes to big purchases. You've been working hard and saving and your partner spends $500 on a new TV. Or you really think you deserve a vacation, but your partner thinks it's a luxury.

What can you do? It helps to have a conversation about how to handle big-ticket items. Maybe there's an amount you want to consult one another before spending, maybe you each get X number of big purchases a year. Work out a system to deal with the problem before it comes up.

Ultimately, saving and spending is about what you want long-term. If you have a conversation about long term financial goals— early retirement, a house deposit, tuition fund— it will make any sacrifices you make in the meantime feel more worth it. Plus, rather than money being something that creates friction, you can look at it as the two of you working toward a common goal.

I know how difficult it can be to talk about money. Hell, it's not my favorite conversation to have with my girlfriend either. But it's so important. You need to make sure you take ahold of your finances as an individual, make sure money isn't messing with your relationship, and you need to talk it out.