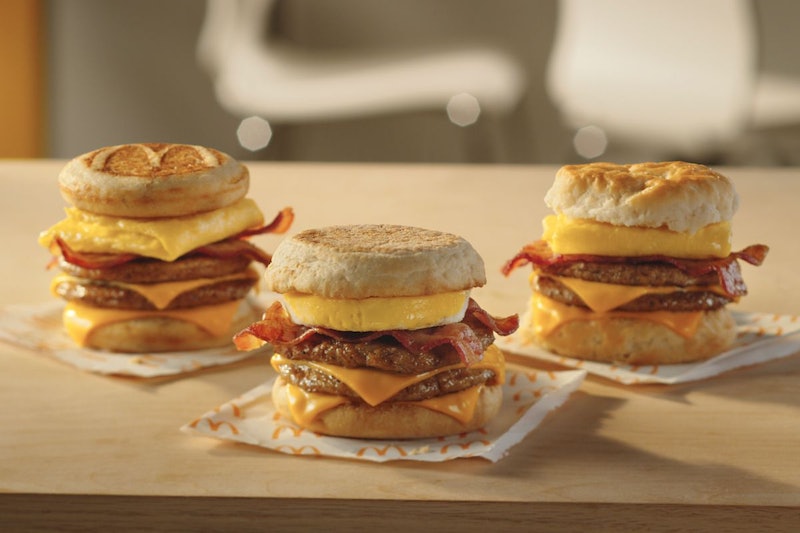 The day McDonald's announced all-day breakfast will go down as one of the greatest days in fast food history. But if you've grown tired of your standard McMuffin and need a morning shakeup, there are still plenty of McDonald's breakfast hacks that will serve you and your hash brown-loving heart well. All it takes is a little insider knowledge and a whole lot of appetite.

If you haven't yet discovered the magic that is a McD's breakfast, you're seriously missing out. The chain doesn't just offer the standard Egg McMuffin and hotcakes that are most associated with the chain — they also offer oatmeal, McGriddles, Biscuits, and a ton of different options for sides that you might not have even considered pairing with your breakfast.

But what many fans don't know is that beyond the standard menu, there are all sorts of ways you can customize your order to make it even more delicious. The key is just knowing the swap-outs you can ask for, or little extras you might not have realized you can get on their own. If you need a little guidance, here are some surefire McDonald's breakfast hacks that will hit the spot without holding up the line.

Obsessed with the griddle cakes on McDonald's McGriddles? Turns out, you can request two cakes separately from the sandwich versions as a side order, and even request some butter and syrup to go with them. It's a fluffier, sweeter rendition of the hotcakes on the menu — plus, it comes with the added option of building your own breakfast sandwich with them at home, if you're feeling particularly inspired. Otherwise

2. Swap Out The Meat — Or Ditch It Completely — On The Egg McMuffin

The Egg McMuffin is beautiful as it is, inside and out. But not everyone is super into the Canadian bacon that makes up its insides, and would rather go for something a bit more traditional in breakfast fare. In that case, you can ask to swap the Canadian bacon out for regular bacon (or, if you're not a fan of either, ask for it not to be added at all).

In case you didn't hear, Taco Bell is testing three new breakfast burritos, and they somehow smashed an entire hash brown into one of them. Consider the bar raised. That said, the testing is only going down in Nashville, Tennessee locations — so the rest of us have to get creative.

You can mimic TB's new burrito and come up with something similar by ordering a hash brown and a breakfast burrito at McDonald's and holding a little arts and crafts session to construct it yourself. Breakfast will never be the same.

Ask For A "Round Egg" Instead Of The Folded Kind

You ever notice how on some sandwiches, like the McGriddles, the egg is this folded, square-shape version? McD's indeed has a round, more normal-looking egg, like what you see on the McMuffin. And, according to LA Weekly, you can sub it in for the square stuff whenever you want.

And speaking of eggs...

Create Your Own McBrunch McBurger

If the creative juices are really flowing and you can't decide between breakfast and lunch, and it's late enough in the day that the full menu is available, create your own brunch meal by requesting egg on any burger. You're going to eat like royalty. Or at least like Ronald McDonald on a good day.