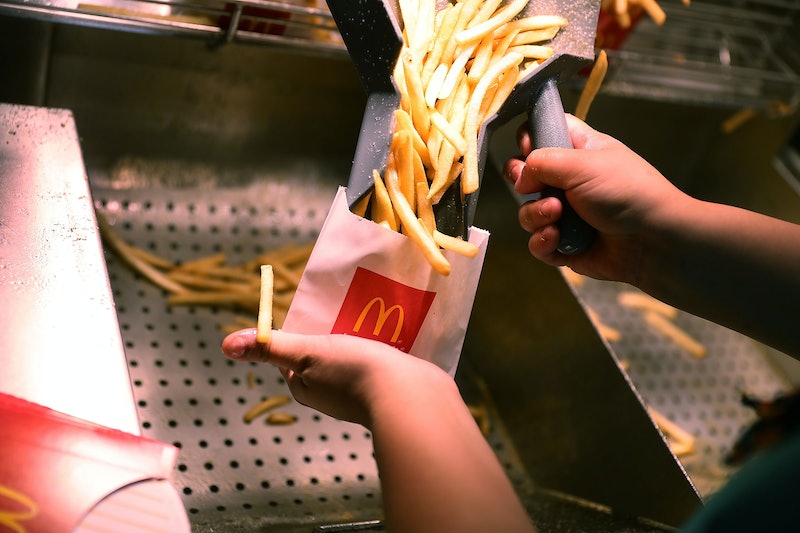 McDonald’s might have done it again, folks. Just when you thought you'd tasted and seen it all from the fast food giant, one dedicated diner unearthed a whole new level of McDonald's menu hack game. The operative word at play here is "hack," because you won’t find the item on the McDonald’s drive-thru board or on posted menus. That said, once you’ll try it, you’ll wonder why you didn’t think of sooner. This new McDonald's dessert hack has everyone losing their minds, and it involves two treats that shine on their own, but are rarely ordered together: The Oreo McFlurry, and Chocolate Chip Cookies.

Let’s be honest: there are two kinds of people in this world: those who eat McDonald’s, and those who do not. If you count yourself in the latter camp, odds are, you’re a pretty big fan. After all, one does not casually start or stop eating McDonald’s. It’s a habit that is forged over time with much dedication and commitment. True McDonald’s supporters regularly indulge in the piping hot deliciousness that lives under its golden arches, and are no stranger to its winning combinations, either: McNuggets with Sweet ‘n Sour, Apple Pie McFlurries, Big Macs with Barbecue Sauce, even the famous Chicken Mac Sandwich (Haven’t tried it yet? Swap those beef patties for chicken and watch your whole world break open).

But the newest dessert hack has been making its rounds on social media, and the internet is very decidedly lovin’ it. Behold: the McFlurry Sandwich.

To try the item, you’ll need to place a compound dessert order: one small Oreo McFlurry, and two of McDonald’s warm chocolate chip cookies. Let the cookies cool, then turn one cookie upside down and slather it with the McFlurry (seriously, slather it). Once you’ve hit your desired thickness, top with the second cookie, then maw down. Welcome to Secret Fast-Food Heaven, population you.

The combination popped up thanks to the experimental efforts of Twitter user @nxthvniel_, who tweeted his bright idea and eventual entry into flavor Nirvana on social media earlier this week. Before too long, his discovery had caught fire, rounding up nearly 18,000 re-tweets in minutes.

Similarly dedicated McDonald’s fans commended the customer for his ingenuity and dining prowess.

A few users started slipping down the McD rabbit hole...

Some users put on their own little chef hats and started tweaking the recipe.

Others were just mad they hadn’t thought of it first, and jealous AF.

No word yet on whether or not McDonald's will add the hack to the menu, but one thing's for sure: customers are absolutely lovin' it.