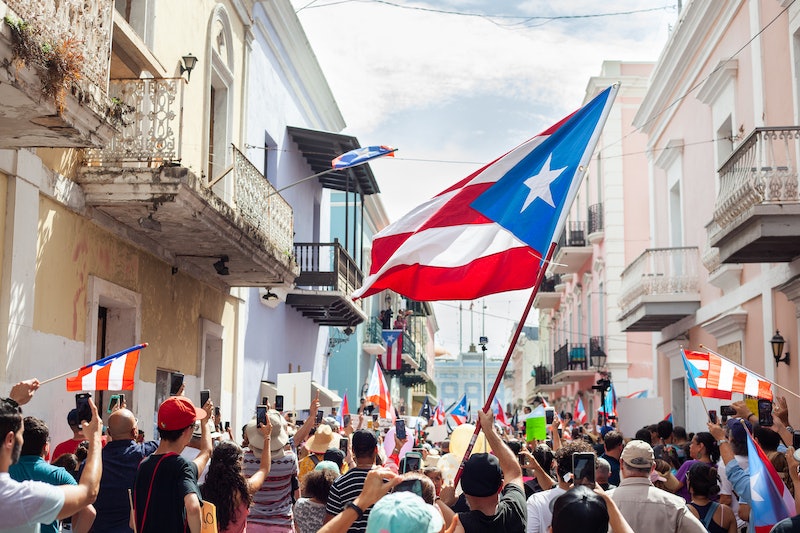 Throughout history, iconography through fashion has been an important form of protest. Utilizing the visual presentation of our bodies can speak volumes. When we think of nonverbal symbolism in protest, the image of a flag often comes to mind. In the July demonstrations in Puerto Rico surrounding its governor, Ricardo Rosselló, one of the key symbols of the movement has been the Puerto Rican flag, and its different adaptations.

For many people who come from colonies in the Caribbean, flags are a huge part of our identity and heritage. As for the Puerto Rican flag specifically, it was considered a felony to display the flag from 1898, when the island became a U.S. colony, until 1952. Federal law ruled that only the American flag was to be shown publicly on the island at that time. Although it was against the law, some residents still secretly owned flags. In 1950, the poet Francisco Matos Paoli, a member of the Nationalist party, famously had his home was searched. Officials went in looking for guns or explosives, but instead found a Puerto Rican flag. Due to his ownership of the flag, and that fact that he had been speaking out on the injustices against the people, he was sentenced to 20 years in prison, later reduced to 10 years after he was declared insane by the court. He shared a cell with other people who were imprisoned for being a part of the Nationalists as well. The government did this in hopes that it would eventually destroy the party. Little did they know that their tactics wouldn't crush the spirit of the people, but rather make them more resilient.

The symbolism of the flag being a sign of resistance, however, predates American colonialism in Puerto Rico. In 1868, Puerto Ricans in the town of Lares, who were tired of being abused by the Spaniards in control of the island, staged the first independence movement, also known as El Grito de Lares. With this early push towards decolonization on the island came the first Puerto Rican flag of resistance. The original flag featured a light blue triangle, with three red stripes and two white ones. After Puerto Rico was made a U.S. commonwealth in 1952, the island adopted the newer version in use today, with the royal blue triangle.

That Puerto Rican national flag is a symbol that extends throughout the diaspora, regardless of a person's proximity to the island. For example, in the 1968 song "Que Bonita Bandera" by Puerto Rican musician, Florencio Morales Ramos, Ramos is quite literally singing about about how beautiful the flag is, describing its appearance. A Boricua anthem like this further inspires people not only to be proud of their heritage, but to have the flag flying higher than ever to honor that.

Since the 2008 recession, the island has suffered massive economic hardship. When Hurricane Maria hit in 2017, the island’s problems were only exacerbated. Flags were flown high throughout Puerto Rico and in the diaspora to honor the people suffering from the destruction. Many felt the need to adapt the flag to reflect the island’s recent turmoil. And so, the black and white bandera was birthed, stripping the iconic symbol to its bare bones. People on the island took to the streets, painting over the traditionally colorful flag with black and white. Those who used the flag explained that the island was in mourning. At the protests in San Juan this July, this black and white flag was ubiquitous.

As we enter the second week of protests, I've found myself on the streets of San Juan, surrounded by fellow Boricuas wearing different versions of the flag. All of them were showing their solidarity for their island, despite feeling that the government has failed them. Ahead, I spoke with five who explained the significance of the flag to them, especially during these historic demonstrations.

Maricela: "The flag of Puerto Rico is very important to me. It is representative of the people who live here and our call for resignation [of the governor]."

Sandra: "The flag represents the heritage of our land and must be respected where ever it is. It’s a symbol of revolution."

Andrés: "I grew up in a protest culture where representing the flag was not even a second thought. I noticed this is the first protest where I saw people from all political sides uniting to showing solidarity alongside the flag. For Puerto Ricans, the flag is a huge symbol of our identity. Being that we are still a colony, it is a representation of our culture and pride as an island."

Claudia: "The flag means unity to me. When I see the flags waving together, it's a reminder that these people are my family. The flag brought so many different communities together. We found our voice, singing, dancing, protesting... and waving our flag on the streets. The energy is contagious and I love it. I think everyone can feel that energy. it's powerful. We are not going to stop; this is just the beginning."

Gerardo: "To me, the flag represents Puerto Rican identity- our homeland and pride. It is a symbol of my free Puerto Rico."

As a Nuyorican now living in San Juan, my experience at these protests has showed me the power of the flag, as well as the community and pride that comes along with it. In New York City, the flag was often identified alongside celebrations, such as during the annual Puerto Rican Day parade. Now, I see our flag as a battle cry — a statement of rebellion that stems from a time where celebrating our culture was illegal. Still, across the diaspora, it's something that will always bring a sense of togetherness. I have never been so grateful to be a part of a revolution, even if it's simply waving my flag in solidarity.