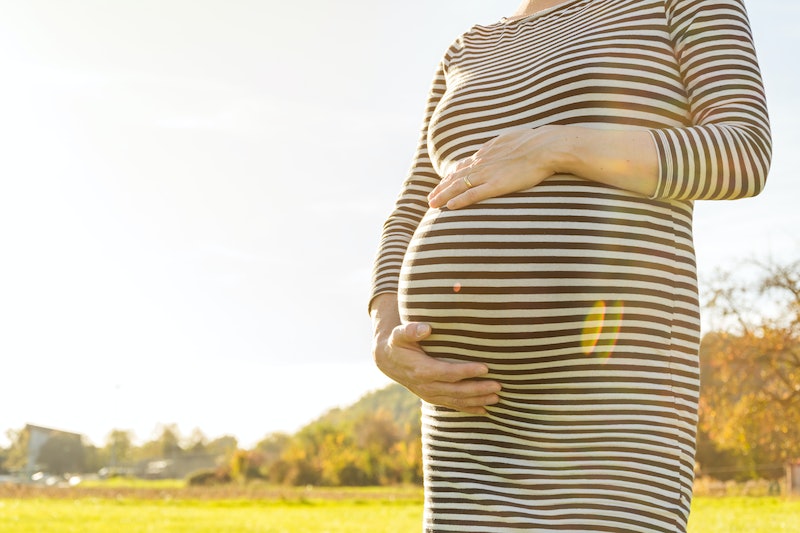 As much as I hate being on my period, I do love getting that monthly confirmation that I'm not pregnant. The thought of experiencing an unplanned pregnancy right now scares the heck out of me. But guess what? While uncommon, "cryptic pregnancies," or pregnancies that conventional medical methods fail to detect, are a real thing; and they're not the only reason people can be pregnant and not know it.

For example, people can spot during pregnancy and mistake it for their period, and it's totally possible for them to be months into their pregnancy before they start showing. Additionally, some of the tell-tale symptoms of pregnancy — like weight gain, irregular periods, and acne — are also symptoms of polycystic ovary syndrome (PCOS). And having a pregnancy test come back negative doesn't necessarily mean you aren't pregnant, either. Though it's important to be informed on the topic, this isn't intended to scare you or make you paranoid. That being said, you should get in touch with your doctor if your period isn't normal or you think you could be pregnant.

To learn more about the reasons pregnancies can go undetected, Bustle reached out to Mark P. Trolice, M.D., FACOG, FACS, FACE, Director of Fertility CARE: The IVF Center in Winter Park, Florida. So, here are five reasons people might not know they're pregnant until they're over halfway through their pregnancies:

1. They Mistake Spotting During Pregnancy For Light Periods

Dr. Trolice says bleeding during the first trimester of pregnancy can occur in up to one-third of women — a statement backed up by the American Pregnancy Association, which states that 20% to 30% of women experience some degree of bleeding in early pregnancy. "Unless a pregnancy is known, women sometimes mistake this bleeding for a menstrual period," Dr. Trolice says. "Any time a woman has irregular vaginal bleeding, the chance for a pregnancy should be determined."

While it's technically not possible to menstruate during pregnancy, many people do experience spotting during their pregnancies and end up mistaking it for their period. Additionally, people who conceive super close to the time they would normally be getting their periods often have what is called "breakthrough bleeding," because their bodies haven't fully adjusted to being pregnant yet.

2. Their Periods Aren't Regular To Begin With, So Going Months Without Having One Doesn't Seem Like A Big Deal

Everything from stress to overexercising to having an IUD to disordered eating can cause irregular periods. Additionally, about one in 10 women in the U.S. have polycystic ovary syndrome (PCOS) — according to the U.S. Department of Health and Human Services — and PCOS often causes irregular menses. "The most common reason a woman experiences abnormal or absent periods is pregnancy, the next is Polycystic Ovary Syndrome (PCOS)," Dr. Trolice says.

People who suffer from PCOS produce an excess of androgens, (sometimes referred to as "male hormones"), causing an infrequent or sometimes total lack of ovulation, WebMD explains. Naturally, since PCOS messes with ovulation, it causes infrequent and irregular periods, too — and often, problems with fertility. When you combine this condition with a lack of other pregnancy symptoms, it's really not surprising at all that some people mistake their lack of menses for a well-known PCOS symptom (or even the symptom of another condition — like chronic stress — that can also lead to irregular periods).

3. They've Been Diagnosed With PCOS & Believe They're Infertile

PCOS is the most common cause of infertility for women, according to the Mayo Clinic; so a person diagnosed with the condition may have been told that it will be incredibly difficult for them to get pregnant. Understandably, this might lead them to believe they're infertile when they're actually far from it.

On top of that, PCOS can cause weight gain, acne, and irregular periods, so some of the most common pregnancy symptoms could simply be mistaken for symptoms of PCOS.

4. They Don't Gain Weight Or Show Any Other Signs Of Pregnancy

Dr. Trolice tells Bustle that — while most people will eventually start showing — some people simply don't gain the weight in pregnancy "typical" of most women. "In pregnancy, a woman may not demonstrate her baby 'bump' until the second trimester," Dr. Trolice says. "Eventually, of course, based on the size of the woman, her body will show the growth of a pregnancy."

While it may be uncommon, it's true that some people struggle to gain weight during pregnancy for a number of reasons — from metabolism issues to appetite loss to morning sickness. Indeed, a 2017 study published in the Journal of the American Medical Association (JAMA) — which looked at data from 23 studies examining over 1.3 million pregnancies — found that 23% of pregnant people don't gain enough weight during pregnancy.

Human chorionic gonadotropin (hCG) is the pregnancy hormone that allows over-the-counter pregnancy tests to determine whether a person is pregnant or not; hCG is essential for a healthy pregnancy, and both urine and blood tests can detect increased hCG levels pretty quickly after fertilization. "By the time of your missed period, the level of hCG detected by blood is typically 100 mIU/mL. Over the counter urine pregnancy tests can detect hCG levels above 20 mIU/mL, while blood tests can measure a hCG greater than 5 mIU/mL," Dr. Trolice says. He says the earliest detection of hCG by blood is approximately 8-10 days after fertilization (a statement confirmed by the Mayo Clinic); and a healthy pregnancy, in the early stages, will have blood hCG levels rise by a minimum of 49% every two days. "So, while a urine test will not detect a very, very early pregnancy, it should begin to pick-up the level by the time of your expected period," Dr. Trolice says.

However, in rare cases, hCG levels can be so high that it actually overwhelms the pregnancy test's mechanisms and causes it to incorrectly read negative. This is called the "hook effect," and it seems to be most common in in molar pregnancies (pregnancies in which an abnormally fertilized egg implants in the uterus but the pregnancy isn't viable). According to a 2017 study published online in Gynecologic Oncology Reports, high hCG levels in molar pregnancies can lead to a "hook effect," or a false negative, thus delaying a pregnant person's diagnosis. Only one in every 1,000 pregnancies are diagnosed as molar pregnancies, according to the Mayo Clinic, but it's important to understand that molar pregnancies can come with serious risk factors — including cancer — and should be treated as soon as possible.

You shouldn't judge people who don't know they're pregnant until late into their pregnancies — it doesn't mean they don't know their own bodies, or are otherwise "clueless." And if you think you might be pregnant, it can't hurt to go to the doctor and give yourself some peace of mind.

More like this
So You're Having A Medication Abortion
By Dana Smith
The UK Abortion Laws In 2022, Explained
By Sophie McEvoy
The Benefits Of Omega-3 Supplements, According To Experts
By Carolyn Steber
5 Ways To Stand In Solidarity With Women In America From The UK
By Sophie McEvoy
Get Even More From Bustle — Sign Up For The Newsletter

This article was originally published on Feb. 1, 2016