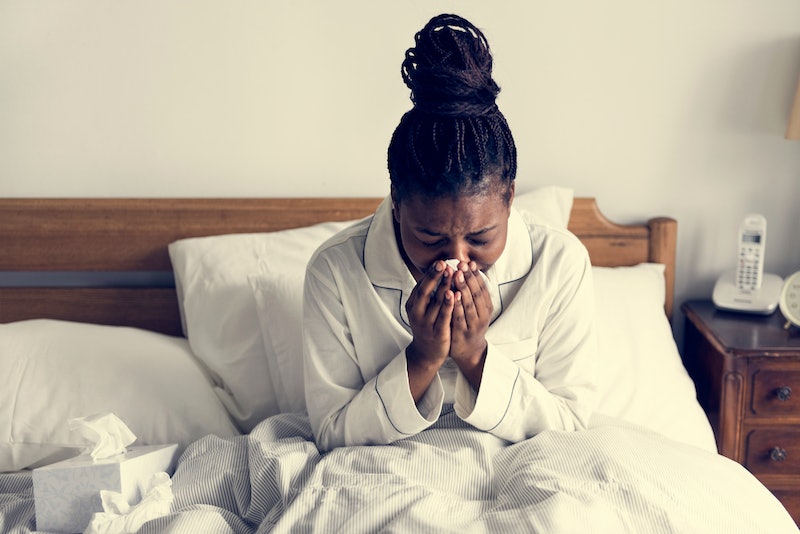 Have you gotten your flu shot yet? No? Might I suggest you do so as soon as you’re able? It’s worth it, both for your own sake and for the sake of herd immunity — even if the flu vaccine doesn’t protect against everything to which you could fall prey during flu season. Indeed, there are still a number of ways you can get sick even if you got the flu shot this year, some of which include flu-like symptoms themselves. So, again, absolutely get a flu shot if you can — but if you find yourself developing something that feels like flu anyway, it’s worth brushing up on what else besides the flu you might have gotten, too.

Flu season in the United States — which, according to the Centers of Disease Control and Prevention, qualifies as an “annual epidemic” — lasts a lot longer than you probably think. Per the CDC, influenza activity increases in October and November, peaks between December and February, and can go on as late as May. Yes, really — flu season can be eight months long during bad years. (Yikes.) And since it spreads so quickly and mutates so fast, getting a flu shot each year really, really matters. First off, it protects you yourself; and second off, it helps promote herd immunity, which means it keeps other people protected, too — something which is of the utmost importance for folks who have compromised immune systems.

The thing, is though, the flu vaccine only protects against… the flu. It usually does protect against a couple of different strains of flu; in 2019, for example, the standard flu shot is geared towards three common strains, although there’s also one geared towards four available, as well. What’s more, according to the CDC, the antibodies your body makes in response to receiving a vaccine for one flu virus can sometimes still be effective in protecting you against different but related flu viruses. But since the flu vaccine does not protect against anything other than flu, you still might be vulnerable to a number of other illnesses that are either associated with flu season or which exhibit flu-like symptoms.

Here are five to look out for:

The common cold can be caused by a heck of a lot of things — per the CDC, more than 200 different viruses are known to be responsible for it — but the most frequent culprits are human rhinoviruses (HRVs). First identified in the 1950s, they’re typically associated with things like upper respiratory tract infections, and sinusitis. More often than not, if you’ve got something that might be referred to as a common cold, you’re probably playing host to HRVs.

As a study from 2013 published in the journal Clinical Microbiology Reviews noted, there are currently “no approved antiviral agents for the prevention or treatment of HRV infection” — so not only will the flu vaccine not protect you against HRVs, nothing will protect you against HRVs. Indeed, it’s widely believed to be “nearly impossible” to develop a vaccine for HRVs due to the sheer number of rhinovirus serotypes there are, according to Medscape. The good news, though, is that HRVs are usually mild; symptoms can be eased with rest, hydration, antihistamines, and nasal decongestants.

Both bacterial and viral pneumonia are characterized by inflammation of the lungs — specifically the air sacs. According to the Mayo Clinic, infected air sacs might fill up with what’s called “purulent material,” AKA fluid or pus, which in turn can lead to phlegmy coughs, fever, chills, and trouble breathing. It is true that both types of pneumonia are often caused the flu — but they aren’t only caused by the flu.

Meanwhile, viral pneumonia can be caused not just by the flu, but also by Respiratory syncytial virus, or RSV, notes the CDC. A respiratory virus, RSV has flu-like symptoms — but it’s not the flu. It’s more commonly the cause of viral pneumonia in children that it is in adults; when the infection spreads to the lower respiratory tract, that’s when pneumonia is likely to develop, per Mayo Clinic.

Like pneumonia, bronchitis— an inflammation not of the lungs themselves, but of the lining of the bronchial tubes, which are responsible for getting air to and from your lungs — can be caused by influenza, but isn’t necessarily caused by influenza. According to a 2008 article published in the journal Canadian Family Physician, influenza A, influenza B, and parainfluenza are, in fact, among the common causes of acute bronchitis — but so are adenoviruses, which can also be responsible for pinkeye, pneumonia, and acute gastroenteritis, and… drumroll, please… rhinoviruses, AKA one of the most frequent culprits of the common cold. And, again, because the flu vaccine doesn’t protect against adenoviruses or rhinoviruses, you can still get bronchitis if you’ve gotten a flu shot.

So, hey, fun fact: “Stomach flu” isn’t actually flu. It’s not related to influenza at all; rather, it’s a colloquial term referring to gastroenteritis, which attacks your intestines and can result in such delightful symptoms as vomiting, diarrhea, fever, chills, headache, and body aches, per the Mayo Clinic. Fun! (In that really not fun kind of way)

In addition to adenovirus (which you’ll recall can also cause bronchitis), causes of gastroenteritis include rotaviruses and noroviruses — and, again, since none of these viruses are actually flu viruses, the flu shot won’t help stave them off. A rotavirus vaccine does exist, but typically it’s only given to infants and very small children.

Alas, even if you do get the flu shot, you might still end up getting the flu. (Note, though, that the flu vaccine itself does not give you the flu; that’s a common misconception.)

Unfortunately, the flu vaccine’s effectiveness varies from year to year based on how well researchers are able to anticipate and match the strains that are likely to be the most active during any given season — and in recent years, the match hasn’t been great. During the 2017-2018 flu season, for example, the vaccine was only 36% effective, reported the CDC. Earlier this season, the hope was that the 2019-2020 vaccine would be a better match; however, at least one study, published in August in the journal Clinical Infectious Diseases, found a potential mismatch in one of the components of this year’s vaccine, which has put the shot’s effectiveness in doubt.

Additionally, if you were exposed to the flu virus either before or shortly after you got your flu shot this year, you’re still vulnerable to infection. Per the CDC, it takes about two weeks for your system to start making the right antibodies after getting the flu vaccine; therefore, if you’re exposed before those antibodies start getting produced, you might get sick.

The good news, though, is that there’s some evidence to suggest that getting the vaccine can at least stop you from getting super sick, should you end up coming down with the flu anyway. A study published in the journal Vaccine in 2018, for example, found both that adults hospitalized with the flu were 59 percent less likely to end up in the ICU if they had gotten the vaccine that season; what’s more, they were also hospitalized for four fewer days on average than people who hadn’t gotten the flu shot. Additionally, 2017 study published in Clinical Infectious Diseases had previously found that getting the flu shot not only reduced ICU admissions and duration of both time in the ICU and time spent hospitalized overall, but also reduced the risk of death associated with the flu.

Even though the flu shot doesn’t protect you against everything — and even though it’s not always super effective for the flu itself — it’s still worth getting each fall if you can. If you have insurance, the flu shot is likely mostly or fully covered by it; if you don’t, though, and your budget allows, you can still get it by paying out of pocket. GoodRX has a chart showing what you can expect to pay without insurance at popular pharmacies this year — costs run between $19.99 at Costco to around $40 at places like Walgreens or Rite Aid. And if you don’t have insurance, some clinics and health departments offer low cost or free flu shots; try getting in touch with your local health department to see what’s available in your area this year.

More like this
How Ovulation Affects Your Sense Of Smell, Libido, & More
By JR Thorpe and Lexi Inks
An Expert Weighs In On The Viral Raw Carrot Salad Trend
By Alexis Morillo
The 11 Benefits Of Aerial Yoga, According To Trainers
By Carolyn Steber
How Many Burpees Should You Do Per Day? Here’s What Fitness Trainers Say
By Carolyn Steber
Get Even More From Bustle — Sign Up For The Newsletter