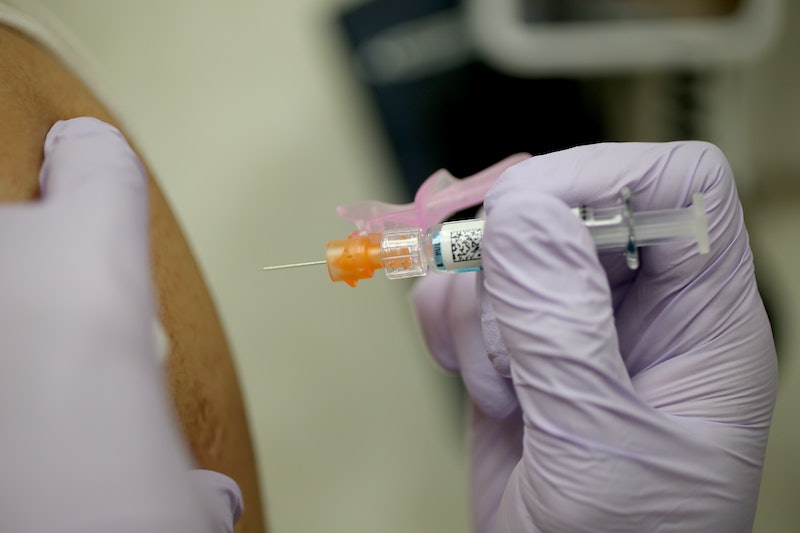 October marks the beginning of flu season, which means people are out getting their flu shots to prepare. Because the flu shot is updated based on the type of virus circulating around the country each year, according to the Center for Disease Control and Prevention (CDC), a flu shot from last year won't necessarily protect you this year. People might be getting caught up considering how effective the flu shot is in 2019, but at the end of the day, it's better to keep getting vaccinated than to take your chances.

When it comes down to it, creating a flu shot — and gauging its effectiveness — is quite the process. "Influenza vaccine effectiveness depends on the correct projection of the anticipated circulating influenza viruses during that particular season," Dr. Dana Hawkinson, MD, an infectious disease specialist at The University of Kansas Health System, tells Bustle. Dr. Hawkinson explains that researchers and doctors are constantly trying to guess which forms of the virus will be most common, both during and after the influenza season. On top of that, he says the CDC studies different sites around the nation in order to determine how effective vaccines are, based on the types of illness patients come into the doctor with.

For instance, the CDC found that the flu shot during the November 2017 to February 2018 flu season was 36% effective in reducing the risk of illness in vaccinated people. And while this year's flu season is only just beginning, the CDC estimates that the flu shot will have a 47% effectiveness rate when it comes to protecting you against the flu.

Even though doctors always recommend you should get it, concerns about the flu shot still manage to surface each year. For example, some people either worry they're getting the shot too often, think the effectiveness of the shot makes it a waste, or believe that it causes the flu. And while it's completely okay to ask questions, these are all dangerous misconceptions.

Because the flu shot is updated each year based on the type of virus that is spreading, as Dr. Hawkinson explains, getting it every year isn't going overboard. Those who think the "low effectiveness" of the flu shot makes it pointless are mistaken as well, according to the CDC. Not only can the flu shot keep you from getting the flu, but for those who might still get the flu after the shot, the flu shot can drastically lower the severity of the symptoms. And for those who are concerned that the flu shot causes the flu, this is far from the truth.

"The influenza vaccine is a very safe vaccine," Dr. Hawkinson says. "Per the CDC, hundreds of millions of vaccine doses have been given over the past 50 years and there has been extensive research supporting their safety. The vaccine can cause mild symptoms after, such as injection site soreness, headache, fever, muscle aches, but these resolve on their own if they occur."

If you still think you shouldn't get the flu shot, you might want to think again. The CDC reported that only 37% of adults were vaccinated for the influenza during the 2017-2018 flu period, which was deemed a "high-severity season." Furthermore, 80,000 people died of influenza that year — and that's more than any flu season in decades, according to the CDC. About 80% of those deaths were attributed to children who were not vaccinated against the flu.

Regardless of how you interpret the effectiveness of the flu shot, it's important to make sure you get one every year to not only protect you but also everyone around you. "Get the influenza vaccine for you and your loved ones," Dr. Hawkinson says. After you get the shot, Dr. Hawkinson says practicing frequent hand hygiene is a must when it comes to preventing the flu this season and always.