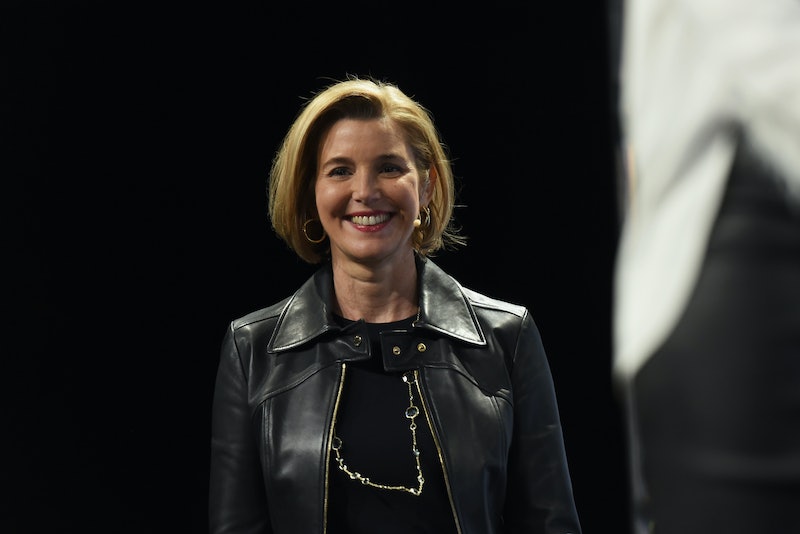 Money is a feminist issue — and yet, women are still reluctant to talk about it. According to a recent Bustle survey of more than 1,000 millennial women, more than 50 percent of people said they never discuss personal finances with friends, even though 28 percent reported feeling stressed out about money every single day. Bustle's Get Money series gets real about what millennial women are doing with their money, and why — because managing your finances should feel empowering, not intimidating. Today's topic: Sallie Krawcheck, CEO and co-founder of Ellevest, reveals the top five times she was told "no" by investors — and how she bounced back.

I run Ellevest, an innovative digital investing and planning platform for women. My team and I launched the company in 2016, and in that time, we’ve become one of the fastest growing digital investment platforms out of the gate.* We’ve built a community of tens of thousands of women, thousands of whom are collectively investing tens of millions of dollars with us. While we have much more work to do (so much more), the early response has indicated that there is a real opportunity for the business that we are building.

But it hasn’t been easy. We’ve gone down plenty of rat holes, many of my own making — such as my being convinced that women would want to understand their “emotional relationship” with money before investing… to which women gave a big thumbs down. And I’ve had to face plenty of “no’s” along the way as I worked to raise the money. Here are five.

At first I wasn’t even going to start Ellevest. After all, I didn’t consider myself to be an entrepreneur. Instead, I planned to take the insights we had formed around women and investing to some of the big financial service firms, sketch it out for them, and offer to help them build a solution. For free, if need be.

In one such meeting with the CEO of a large bank, I laid out that women control $5 trillion in investable assets; that we leave more than 70 percent of it in cash, potentially missing out on hundreds of thousands of dollars of wealth over our lifetimes as a result; and that 90 percent of us women manage our money on our own at some point in our lives…. whether we want to or not. Thus, I argued, it is clear that the investing industry is not serving women as well as they could be, and there is a significant opportunity to do so.

After I finished speaking, the CEO in question looked off into the distance, presumably deep in thought; then he said to me, “That’s very interesting, Sallie. But don’t their husbands manage their money for them?”

I guess he never even *heard * me say the part about 90 percent of us managing our money on our own at some point in our lives….

OK, no partnership there. At that point, it quickly dawns on me that, if we are going to close the “gender investing gap,” I am going to have to pull together a team and we’re going to build this ourselves. Out we go to raise some money.

Before long, I have an all-time great meeting with a venture capitalist. It’s one of those meetings you dream about: he loves the business idea, he loves the product we are building, he loves the team we have pulled together, he loves my co-founder, he loves me. He offers us money pretty much on the spot and begins to negotiate the terms.

And then… never mind. He stops returning phone calls, he is slow to respond to emails. Eventually, he says the valuation of the company is too high for them. “Yeah, that’s right,” he says, “the valuation is too high.” I later meet one of his colleagues; the real reason, I am told, is because his partners believe that “women are a niche market” and “you can never build a real business serving women.” Yup, half the population is some niche market.

(This is the first of many: since then I’ve also been told women are a niche market on industry panels and in the press. And I’ve also been told that the “real issue” facing women is the gender pay gap, not the fact that we don’t invest enough — as though we are only allowed to solve one issue impacting women at a time.)

Another day; another investor meeting. This time with a gentleman outside of the traditional venture capital world, who invests family office money.

Here we never make it past the first meeting, because he helpfully lets me know that Ellevest simply won’t work. He explains that that’s in part because women won’t want to invest their money with other women, because they believe that men are more successful investors. I point out that the research tells us that women are actually better investors than men, both at the professional and individual level. He waves those facts off.

I know there are only three strikes in baseball, but the “no’s” kept coming.

When I raised our latest funding round, I had one meeting with a top venture capital firm; the meeting was all guys and me. And it was clear from the get-go that the senior partner was going to give us a thumbs down. His reasons: I don’t know digital marketing (true, but we’ve hired people who do, and we’ve learned a lot about it since our launch); we needed to get our payback period down (agree, and here’s the list of five things we’re doing to do so...); and our hiring financial advisors and financial planners will fail. On this one, he let me know that I didn’t know what we were getting ourselves into, that financial advisors are tough to manage, that they will change the complexion of the business, that I was biting off more than I could chew.

Um, newsflash: I ran Smith Barney, Merrill Lynch Wealth Management, US Trust and the Citi Private Bank. There are plenty of things that I know nothing about, but the financial advisory business isn’t one of them. (I guess he forgot to read my bio, or Google me before I came in, or listen to me when I introduced myself... or when I talked about running those businesses... or when the others in the room asked me questions about running those businesses...)

That’s OK, I can laugh that one off (sort of). This one was tougher.

Right after we completed our last raise, we heard from an investor who was sorry she missed out on the latest round, definitely would have invested in it, it’s exactly the type of thing her firm wants to invest in, they love it, they love the mission, they love the business, they love the team. Please please please call her first when we decide to raise the next round.

No problem. The next time we’re in the same city, we get together. We hit it off; I get a list from her of what her firm would look for before investing in Ellevest. This includes a certain growth rate, having more than 50 percent of the growth come from organic sources (such as word of mouth, rather than advertising), and certain other financial metrics.

OK, got it. I keep her updated over the months, in person and by email; the business is hitting her requirements; and she is encouraging. When it’s time to raise, she’s one of my first calls. She’s excited, she says.

At her request, we send over the earnings models and decks. And then… they’re a no. We don’t even get a meeting with her partnership.

It seems that she was so busy loving on us that she took it to her partnership before digging in to learn our business. We walk through a few of her partners’ objections, most of which are pretty easily answerable. But, in business, it’s hard to turn a “no” into a “yes.” Even after we better arm her with the answers, it’s still a no.

And that’s not counting the folks who still haven’t told me no: the guy from one of the brand-name Silicon Valley venture capital firms who is “really interested in what we’re doing and wants to get back together. I’ll send dates,” and the dates never come. There was the investor in NY who rescheduled our meeting five times; I finally started to get the hint we weren’t his first priority. And the investor in Chicago who is still looking for dates for us to get together… but they promise they’ll get back to me soon.

The moral of the story is that, sometimes you have to kiss a lot of frogs.

But we got the raise done. Because this doesn’t count the investors who “got” what we were doing, were excited about the business and the mission, thought women were more than just a niche market, understood the positive impact our success could have, who were respectful of our time.

The moral of the story is that, sometimes you have to kiss a lot of frogs. And so it’s important — whether you are raising a funding round, looking for a new job, searching for an advisory board position — to have a healthy funnel of prospects. And sometimes a no — a fast no — can be a gift, so that you can get on with finding the best fit.

Sallie Krawcheck is the CEO and Co-Founder of Ellevest, an innovative digital investing and planning platform for women. She is also the Chair of Ellevate Network, the global professional women’s network.

*Source: Ellevest. This statement is based on the growth in assets under management for digital services provided by Ellevest, Betterment, Personal Capital and Wealthfront during the first 11 months post firm launch. The data was collected from Form ADV filings made with the Securities and Exchange Commission (SEC) for each of the respective firms. Ellevest launch date was November, 2016.

The information provided was obtained from third party sources, which we believe to be reliable but are not guaranteed for accuracy or completeness. It should not be relied upon as investment advice or recommendations, does not constitute a solicitation to buy or sell securities and should not be considered specific legal, investment or tax advice. Investing entails risk including the possible loss of principal and there is no assurance that the investment will provide positive performance over any period of time.