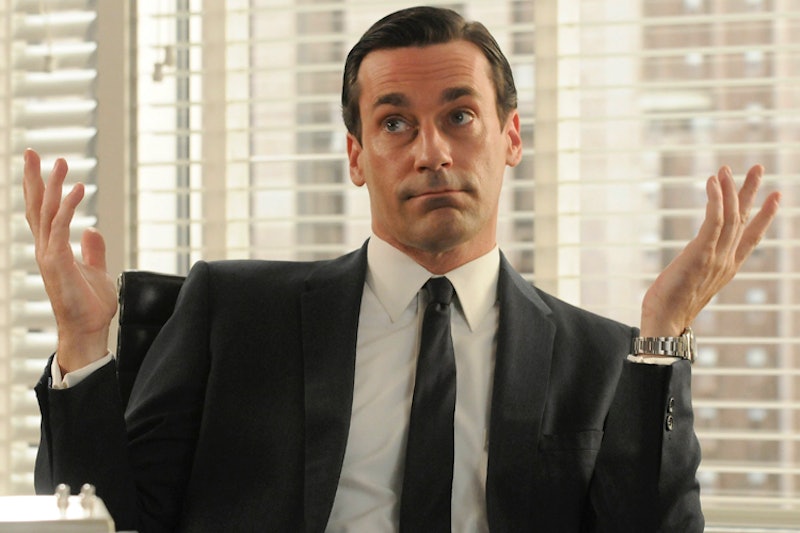 It's the new year, we're all back at work, and some of us, unhappily, are experiencing the wonders of having a toxic boss yet again. Not all of us can be talented leaders of people, but there's being bad at answering emails or remembering the schedule, and then there's flying off the handle, obsessively micro-managing, belittling employees, never sticking to your word, and breaking rules for your own benefit: toxicity, in other words. Living with a toxic boss can be brutal, but psychology, luckily, is here to help.

Having a toxic work environment is genuinely bad for you — as if the air were filled with emotional asbestos. A 2012 study traced a lot of misery at work back to the management style of superiors, and whether it satisfied or "thwarted" the needs of employees. That's not surprising, as the powerful will always be influential in every environment; but it's when things get toxic that the consequences become more dire. Studies have revealed that the impacts of a bullying, negative, or harassing boss will spread across the workplace, not only to the target of the treatment at the office, but to other workers; it's now well-known that a toxic boss will compromise everybody's productivity, not just the victim's. And your toxic boss may also be causing your personal relationships to suffer, as you take out frustration and misery on those around you. New research this January shows a vast web of impacts for victims of toxic management, from stress levels to self-worth.

So how do you identify a toxic boss in the wild, and what can you do to deal with them short of doing a little Agatha Christie-style secret murdering? (Don't do that.)

We've talked about toxicity in workplaces on Bustle before, but a lot of research has actually been done on the toxic behavior of bosses in particular. Power relationships in the modern workplace are a huge part of many lives, as we spend the majority of our days in working environments. Bosses that go off the rails cost both money and (as we shall see) worker sanity, so it's in everybody's interest to see who they are and how they work.

If you're looking to identify your boss as toxic, the science is a good place to start. The State University of New York released research in 2016 that identified two types of toxic bosses: "dysfunctional," or people who may well be well-meaning but are incompetent or inconsistent and cause difficulties through their lack of skill; and "dark," or people who genuinely wish to hurt and create conflict. The "dark" type is the more commonly identified (every one in Horrible Bosses, for instance), but the dysfunctional can be equally harmful. They may be motivated by insecurity or prone to mood swings, and a study from Michigan in 2016 found that workers actually prefer a consistently terrible boss to one who ricochets from good to awful.

If you've got the dark type on your hands, you of course may not be in for a particularly fun time either. A scale in 2012 was released specifically to identify arrogant behavior in bosses, including putting their personal agenda first and exaggerating their own ideas at the expense of others. However, a "dark" boss can manifest their influence in other ways: intentionally causing trouble, pitting people against one another, abusing workers, thriving on discomfort, and harassing or breaking boundaries. And dysfunctional ones can be toxic through their sheer neediness, unpredictability, and/or refusal to change.

Tip #2: Give It Right Back To A Bullying Boss (Secretly)

Here's something surprising. A study in 2015 revealed that people with toxic bosses of the bullying kind were actually pretty protected from the effects of the toxicity if they gave as good as they got, in a passive-aggressive sort of way. This is a hilarious addition to the wisdom you may have got about bullies as a child, where "give them a taste of their own medicine" ruled over "be the better person." The scientists, from Baylor University, surveyed nearly 500 people over two different studies, and asked them how their bosses treated them, how they responded, and how they felt about life at work. One study was devoted to whether retaliation actually harmed their career prospects.

The ones who were happiest were the ones without nasty bosses; but those who did have to suffer with one were divided into two classes — those who attempted to fight back and those who sat and took it. Those who fought back did it in passive-aggressive manners, like ignoring, pretending they didn't hear, and slacking off. And, interestingly, those people were much less likely to feel psychological distress or experience dissatisfaction with their jobs. They were also more likely, it seemed, to progress up the career ladder.

Why? Perhaps bullies respect a bit of gumption. Perhaps, as the researchers suggested, coworkers admired the retaliation and strengthened their career prospects. Perhaps they just felt stronger and more capable as people. Either way, yes, you really should consider giving your toxic boss the secret finger.

Tip #3: Say Thank You To A Dysfunctional Boss

This tip is exclusively for dysfunctional bosses, those whose problems and aggression come from an inherent sense of insecurity. In 2012 the University of Southern California found that a good strategy for workers intensely frustrated by their toxically insecure boss's nastiness: say thank you to them.

It may seem sycophantic, and likely to increase the behavior rather than decrease it. But the researchers did a series of experiments that found that "power abuse" that stemmed from a lack of confidence disintegrated when subordinates expressed gratitude. One of the scientists explained, "When people have power they feel the need to meet demanding role expectations, and when they don't feel competent they lash out with aggression toward others. To assuage this effect, we found that affirming the ego of the power holder ameliorated the aggression." Basically, a reassured insecure boss can be more confident and have fewer tantrums.

If you want to figure out whether insecurity is at the root of your boss's problems, the Harvard Business Review has a good primer of the typical insecure boss's behavior. Are they extremely competitive with subordinates? Do they doubt and waver a lot, and express worry and aggression if somebody seems to try to take the lead from them? Do they get paranoid about other talent? Do they lash out if they suspect they're being undermined? Ding-ding, we have a winner.

Yes, I know you're looking at me as if I have a hole in my head, but it's true: dysfunctional bosses who treat their employees like crap because of stressful environments have been shown to be less abusive if they manage to fit in some exercise. A survey of supervisors and employees from the Midwest in 2012 found that, in stressful situations, some supervisors were inclined to take it out on employees, even unintentionally (hi, dysfunctional boss). But if they were encouraged to get some more exercise during the stressful periods, this actually decreased. How you manage this with your boss is up to you. Suggest an away day or team building activity, perhaps. But remember that it will only work for stressed-out dysfunctional types, not dark ones.

Tip #5: Put Yourselves On The Same Page

Perhaps you're facing off against somebody with more seniority and your position seems untenable. Now is the time to involve HR and get on the same page. Psychological research indicates that there's massive value in sitting down and talking to your boss about how your relationship really is, because sharing a perspective seems to create a better workplace.

That particular bit of wisdom comes from research in 2014, which found that bosses and subordinates were more satisfied and happier in their workplace if they agreed on what kind of relationship they had, even if it was, for lack of a better word, sh*tty. If a boss believes the relationship was good and the employee said it wasn't, or the other way around, performance and stress related factors suffered; but if they both knew the score, they were more likely to get things done and understand one another.

Psychology Today suggests that, if this is a necessary step, it's a good idea to keep a cool head and a regular diary; have specific incidents you'd like to discuss moving forward, and judge carefully whether you should have another person in the room or not (insecure bosses may find this threatening, while bullies may say things that need a witness). For more tips on how to do this, you might want to check out our guide for figuring out how to address a workplace bully with HR.