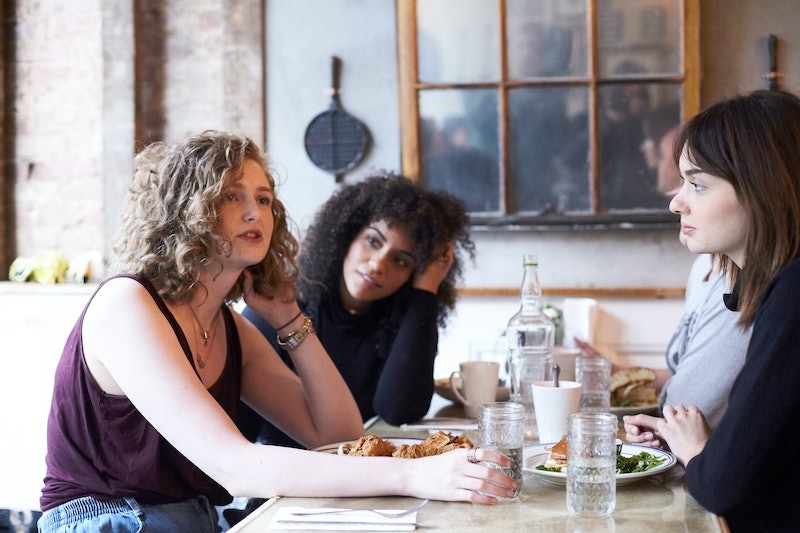 Though sexism often rears its head in big, ugly, violent ways, there are plenty of times in which — even from those with whom you're close. Knowing how to respond to benevolent sexism from your friends may no be easy, but it's worth learning. It'll both help dismantle the patriarchy and bring you closer at the same time. Learning is one of the many things friends are for, right?

"Benevolent sexism" is predicated on the belief that women are naturally kinder, gentler, meeker, and more skilled at domestic tasks, while men are more brash and braver and stronger and can't hardly do anything delicate with those big, meaty paws of theirs. Rather than overtly attacking women, this type of sexism traps women under the guise of "compliments." In doing so, it can be much more difficult to identify and argue against.

In the 18th and 19th century, the concept of "separate spheres" became particularly popular in the United States as an explanation for why men held public positions of power, while women were discouraged from doing so. Legally, women were dependents until marriage, and under coverture afterwards — meaning, essentially, that a woman's separate legal existence disappeared after they were married. A woman's sphere was inside the home; a man's was outside of it. To enforce this structure, female "strengths" began being touted as inherent. Women are just naturally better at housework. Women are naturally better at raising children. These are compliments! Women are great, but just, like, different! We lost generations of incredible minds because of this constrictive way of thinking.

These toxic, social constructs of gender are far from being eradicated; if anything, in a world where hostile sexism is moving ever so slowly in the direction of "unacceptable," benevolent sexism is thriving. Studies have shown that countries with higher rates of benevolent sexism tend to have fewer women in roles of power, and that women who buck these stereotypes are treated with an increased level of hostility.

So how do you respond to benevolent sexism? Especially when you're dealing with sexism from your friends, from people you care about, confronting them about their views can be a murky social situation. Personally, I've found the concept of "calling in," as opposed to "calling out," particularly helpful. Work against sounding condescending. Ask them to just think through preconceived notions and stereotypes. Express why it's harmful and how it makes you feel. You got this.