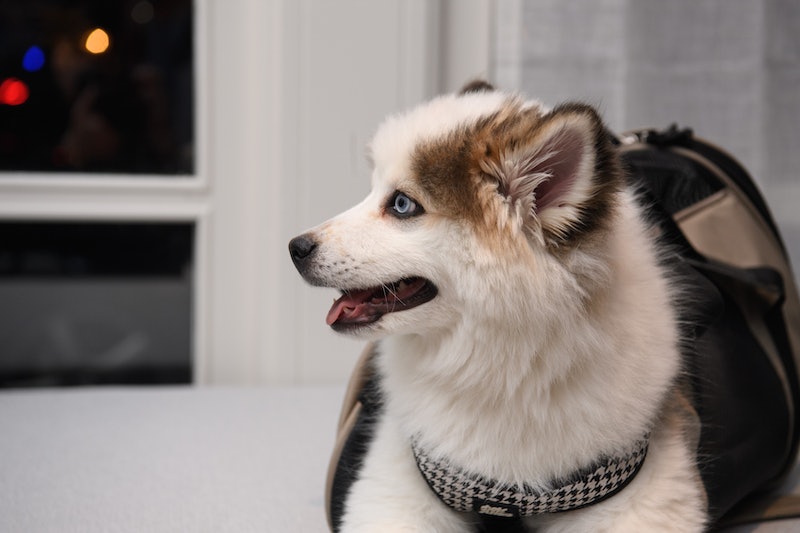 Pets are the best, especially dogs. They're your companion when you need a friend, they cuddle whenever you're feeling lonely, and they can make you smile the second you walk in the door. But for all of the good things about pets, they do have a creepy side: it sometimes seems like they have a paranormal sense that humans just don't have. Have you ever been alone in your home with your dog, and all of the sudden, their hair goes up and they seem to be staring at something that doesn't exist? It's scary enough to make you want to run out the door. There are some weird, paranormal things dogs might sense, and it's pretty terrifying.

To make things less scary, know this: there's no actual scientific evidence that dogs can sense paranormal activity, like ghosts. And, actually, you might have that same sixth sense. Pet psychologist Marti Miller told Animal Planet that both humans and dogs have a sixth sense, saying, "But humans judge or deny what they're feeling. Dogs don't judge what is going on in the environment. While our own minds start to analyze what is happening, dogs don't do that. They feel the barometric pressure change, and may react by shaking, panting, salivating and feeling anxious, or they may not react at all."

Some say that dogs don't have a sixth sense at all; they can simple smell and see better than us. Nicole Ellis, Rover.com's professional certified dog trainer, told Bustle, "Dogs don’t have a sixth sense as much as they simply have heightened versions of all of the other five senses. Dogs can pick up on minor changes in the environment, small sounds from down the street, etc. and learn to associate those with certain actions, which could lead to the belief that they can sense things before they happen or at least before humans do."

But you know what? It's a lot more fun to imagine that your dog is sensing something paranormal, as eerie as that seems. Plus, we might not have evidence that they have a sixth sense, but we also don't have evidence that they don't. There's a lot about dogs (and animals in general) that we don't know, so it's completely possible that they can see ghosts and predict natural disasters. Just saying!

In any case, here are a few things that dogs can sense. It's pretty spooky:

More like this
If You Have Pets, You Probably Don't Realize You're Making These Common Mistakes
By Mackenzie Edwards
David Tennant’s Transformation In ITV’s 'Litvinenko' Is Astonishing
By Sophie McEvoy
The 10 Memes That Defined 2022
By Alexis Morillo
Here's How To Support Jewish People Amid Rising Antisemitism
By Hannah Orenstein
Get Even More From Bustle — Sign Up For The Newsletter

This article was originally published on April 1, 2018