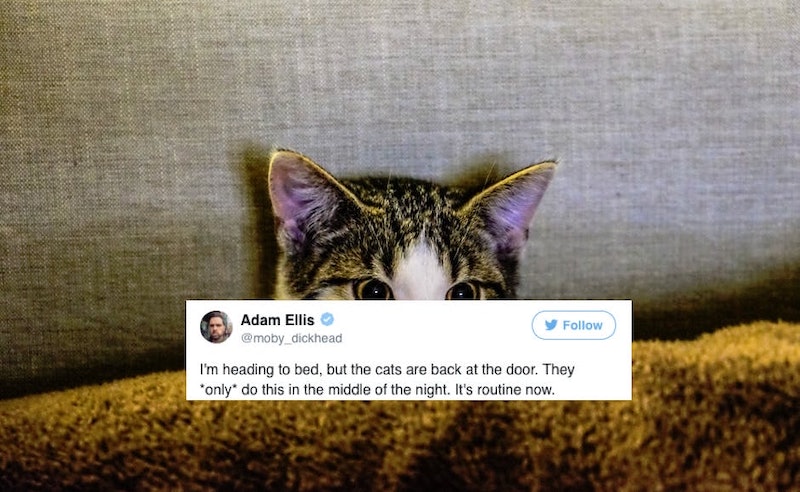 One of the key elements of Adam Ellis’ Dear David Twitter tale is his cats. Throughout his ordeal, as he’s attempt to figure out whether his apartment is actually haunted and whether the alleged ghost stalking him is trying to kill him, he’s posted pictures and videos of his two cats doing weird things — prompting many to ask, can pets see ghosts? Is that why the cats keep gathering by the front door to Ellis’ apartment at the same time every night? Are they responding to Dear David’s presence? Or is it more easily explained than that?

The strange behavior of Ellis’ cats showed up early in the story; they were part of the very first thread Ellis tweeted about the whole thing. To recap, he began by telling us that he had first had a series of dreams: One in which a boy with a misshapen head appeared on a rocking chair in his bedroom before starting to come after him threateningly; one in which a girl shared both Dear David’s name and a few rules for how to communicate with him; and one in which Ellis asked Dear David some questions and accidentally broke one of the rules. Some time went by; Ellis was unable to find out anything about Dear David via the internet, and eventually he moved to the apartment above the one he had originally be living in.

Then, he tweeted this:

They'd been doing it like clockwork, he said. What's more, when he looked out the peephole, he said he could have sworn there was something on the other side — something… not necessarily of this Earth. So: Did Ellis’ cats start sensing Dear David’s ghost in the real world sooner than Ellis did? Maybe— although it depends on how you feel about the existence of ghosts in the first place.

What we do know is that cats have keen senses; indeed, their eyesight is often better than human vision is. A study published in 2014, for example, found that dogs, cats, and other mammals — that is, a lot of the types of animals that humans tend to keep as pets — might be able to see ultraviolet light. Humans, however, can’t see that type of light — which means that, yes, your pet can likely see things that aren’t visible to you yourself. So, when it looks like they’re reacting to nothing, they’re actually probably reacting to things you just can’t see.

Light, you see, consists of wavelengths on a spectrum of colors; humans can generally see what we call visible light, which covers colors ranging from red to violet — but beyond that is ultraviolet light, which we can’t see because our eyes filter those frequencies out. Some animals, however, have eyes with UV-transparent lenses — which means they’re able to detect the ultraviolet light that human eyes can’t. We’ve known for some time that some birds, fish, insects, amphibians and reptiles, and mammals have these kinds of eyes; however, we didn’t think that dogs and cats were among them.

Apparently, though, we were wrong. According to LiveScience, the researchers who conducted the study gathered a huge collection of eyes belonging to animals that had died and measured how much light was able to get through to the retinae. (Don’t worry — the animals of course weren’t killed specifically for the experiment; that would be inhumane. They were already deceased; the eyes were donated by zoos, veterinarians, and other organizations.) Somewhat unexpectedly, eyes belonging to dogs and cats were among the ones the researchers discovered allowed some UV light through — which means that they might be able to see the ultraviolet light humans can’t.

(Although they can't actually shoot lasers out of their eyes. Or at least, not to the best of my knowledge.)

What’s more, cats can see in much lower light conditions than humans can; they have extra rods that allow them to do so. Furthermore, they’re better at tracking subtle movements than humans due to their superior peripheral vision. According to The Dodo, that’s usually what’s going on when cats look like they’re staring into space — they’re tracking movement that the humans nearby may have missed. Veterinarian Rachel Barrack also noted to The Dodo that cats tend to be a little more curious than dogs or other animals, which “could explain their sometimes erratic behavior.”

What all of this amounts to is the fact that pets can often see things that are invisible to humans. So, if you happen to a) believe in ghosts, and b) believe that ghosts are invisible, then you might also draw the conclusion that, when your pet is acting bizarrely seemingly for no reason, it might be reacting to something invisible to your own eyes — which, in turn, could mean that it’s reacting to a ghost.

This is what a lot of people think is going on when Adam Ellis’ cats do this:

Especially considering that they only do it at night, according to Ellis:

And specifically only do it at midnight — or, lately, at around 10 p.m.:

However, whether or not this theory holds water for you depends on whether or not you actually believe in ghosts in the first place. If you don’t, then you’re probably just going to assume that there’s a bug, mouse, or other kind of pest somewhere in your house that your pet is hunting. There are, after all, plenty of reasonable, non-paranormal explanations for why humans sometimes think they see ghosts; the same is likely true of pets, too.

What’s more, as Animal Planet notes, there’s not a lot of hard, scientifically backed evidence that pets can see ghosts or sense other kinds of phenomena; most of it is “elusive and anecdotal.” That said, though, there are rather a lot of anecdotes that seem to describe a pet responding to something supernatural floating around out there; from articles, to Reddit threads, and even to pieces discussing alleged signs your pet has seen a ghost, these stories are easy to find.

Heck, maybe you’ve even got one of your own that matches up. I sure do; it’s the only thing I’ve ever witnessed that’s come close to being something that could possibly be classified as potentially supernatural. Years ago, I was visiting my grandparents with my family. It was a long trip, and my grandparents lived several states away, so we'd brought our dog with us; additionally, there was another dog living at the house at the time as well, so including our little guy, there were two puppers on the premises during our visit.

The house was old, with a lot of equally old furniture and photographs scattered around the place. One corner of the living room, tucked behind the stairs, had loads of these pieces of furniture and photos; it was set up as a little sitting area, although no one ever really sat there. It always wigged me out, for some reason — the hairs on the back of my neck stood up whenever I wandered over there — so I tended not to spend too much time over there.

I was, however, still surprised one time during that visit to find that both dogs — generally good tempered creatures — were over there in that corner, their hackles raised, staring intently at the rather uncomfortable couch, growling softly. I don't remember how long they did it for, but it was long enough to strike me as weird — and then, suddenly, they both just… stopped. The growling ceased, their tails started wagging, and they ran off.

Again, it was an old house; the dogs could very well have seen a pest in the house, or sensed some infrasound, or been triggered by any number of other possible, completely normal explanations. And as much as I love ghost stories and freaky things, I’m typically a skeptic.

But I still wonder sometimes. What if? Just… what if?

Are Adam Ellis’ cats reacting to Dear David? Or are they just reacting to a mouse or something? You be the judge.