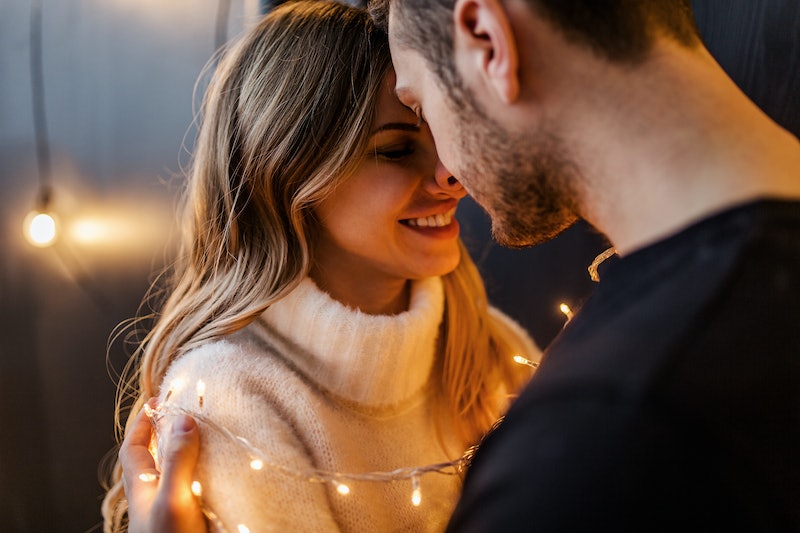 Going back home for the holidays? Worried about bumping into your ex? Or, hoping you will? According to astrologers, it might be already written in the stars. Zodiac signs that are most likely to hook up with an ex this holiday season might have a predisposition to looking back and romanticizing the past. For other signs, the thought of rekindling a love or or lust that's long since faded isn't appealing in the least.

Bustle talked to astrologer Kyle Thomas about which signs are going to be most temped to slide into their exes DMs after an eggnog or two. According to Thomas, it isn't always a bad thing to dig into the ex files. While we might often associate the past with negativity, sometimes we're drawn to it because there's still a lesson to learn from it. And sometimes an ex is only an ex because your timing wasn't right the first time around.

Yes, there's really the potential for certain signs to get back together with their exes over the holidays, as feelings and nostalgia will be high, creating the perfect climate to rekindle an old flame that never really went out. Here are the signs that should expect to find themselves in a familiar embrace this holiday season:

"Mercury, ruling the mind, was back peddling throughout most of November in your marriage and relationship sector. It technically has been making you reconsider if you and your significant other are on the same page since October," Thomas tells Bustle. This period of thought will continue through the holidays, and according to Thomas, it could make you especially nostalgic for an ex. That said, if you're going to reconnect, Thomas says it will happen soon, and that "if it doesn’t happen now, it’s very unlikely to happen again until May and June of 2020 when Venus, your planet and the ruler of love, goes retrograde."

"You’ve been having some hiccups in your love life and that’s because Mercury, ruling communication, was doing back flips in your romance and love zone in all of November," Thomas tells Bustle. Because of this, Cancers might have already reconnected with exes and now, during the holidays might be trying to make sense of it all. "Also, with Mars, ruling passion and sex, moving through this love zone, too, it’s sure to heat things up for the rest of 2019!" So if you've opened the door again for an old love, it might get steamy during this time.

With so much energy focused in your Sun Sign throughout November and December, your desires and relationships will be front-and-center! You are certainly hungry to pursue your heart’s desires, and for some Sagittarius, it could very well be an ex. This is because you’re having a big focus on the past, closure, and healing the patterns that led you to where you are now. Mars, ruling sex and passion, is heating up this zone and you could hunger for reconciliation so you can move on — or another chance to bring it back for new journeys ahead.

"From November 2018 until December 2, 2019, all Capricorns have been going through a soul journey to decide what they want to release from the last decade and what they want to carry forth into the coming 12 years," Thomas tells Bustle of Cap's thought dilemma perfectly synching up to Thanksgiving. "This is because Jupiter, ruling luck and miracles, creates very powerful patterns in our lives. For the last year it has taken up residence in your zone of healing and closure, so it is likely that you had to face some of the important lessons that led you to where you are now," Thomas goes on to explain. The way this will all align on Thanksgiving will force you to sort out your feelings about the past, "because of this, you could be contemplating the one who got away and if you can truly reignite your fire so it builds for many years of love and happiness to come."

"With Jupiter reflecting your attention on the past, you may be considering reaching out to an ex for closure, reconciliation, or another chance. If you do so, once Venus, ruling love, and the Sun, ruling your focus, move into this sector throughout much of December, you could end up sending off that much-needed text or email," Thomas tells Bustle. Starting the conversation could lead to a hook up if your ex is on the same or curious about what they've been missing. "Then, with a solar eclipse in this zone blasting open a new beginning on December 25, 2019, you could truly resurrect a ghost from the dead," so you can plan on seeing your ex over the holidays if you reach out.

While these signs might be most likely to hook up with an ex over the holidays, they're not bound to. It's a choice to reach out and it's a choice to respond to a text message. If you feel like your ex should remain in the past for your own health or safety, keep them there. Just because the stars are making a reconnection possible, doesn't mean you have the take the opportunity.