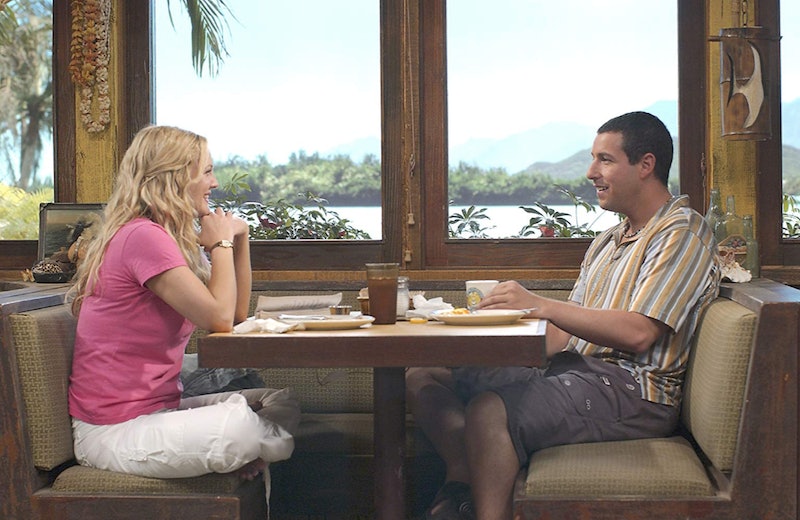 50 First Dates turns 15 on Feb. 13, but it seems like just yesterday that the Adam Sandler and Drew Barrymore rom-com hit theaters. Thanks to its unconventional plot revolving around Sandler's Henry trying to make his amnesiac love interest Lucy (Barrymore) fall for him every day, the movie has become a fan-favorite over the years. That said, there are still plenty of behind-the-scenes 50 First Dates trivia that even the film's superfans might not know, as revealed to Bustle by director Peter Segal and casting director Roger Mussenden.

In the interviews below, the men address plenty of big 50 First Dates questions, like why Sandler decided to film in Hawaii, where the inspiration for Rob Schneider's character came from, and how Sean Astin went from being Samwise in Lord of the Rings to taking on such a surprising, comedic role. Segal and Mussenden also reveal some of the big changes that were made to George Wing's original script, how the movie's memorable '80s covers soundtrack with a reggae twist came to be, and how they really feel about some of the controversial jokes made in the film all those years ago.

More like this
Angourie Rice Unleashes Her Inner Control Freak
By Jessica Derschowitz
How Director Quinn Shephard Turned Dylan O’Brien Into A “Viral Weed Blogger”
By Samantha Leach
At 28, Lesley Manville Was Acting, Picketing, & Singing Kate Bush Songs
By Olivia-Anne Cleary
Reese Witherspoon Gave Fans Hope For 'Legally Blonde 3' After This Surprising Movie Inspired Her
By Jake Viswanath
Get Even More From Bustle — Sign Up For The Newsletter