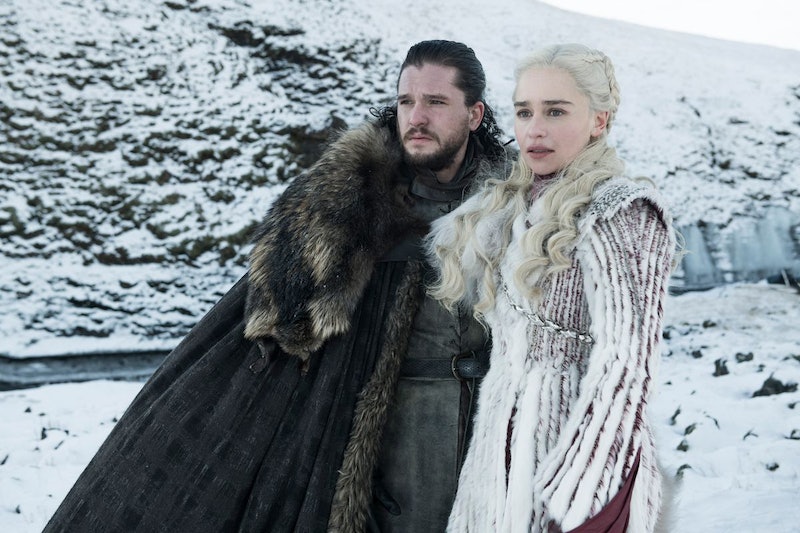 While it's always fun to come up with your own amazing Halloween costume that will get you tons of compliments, sometimes it's even more fun to dress up with someone else. Couples costumes are always a good idea for Halloween, and there is definitely no shortage of ideas out there when it comes to pop culture inspiration — especially if you're a Game Of Thrones fan. The series ended its run in May 2019, and though its ending wasn't considered the best in terms of payoff, its iconic characters are still A+ choices for Halloween costumes. For instance: If you and your bae are GoT fans, perhaps consider Daenerys and Jon Halloween couples costumes? (Of course, even though these are generally thought of as "couples" costumes, that doesn't mean you have to do them with your significant other. You can do them with your best friend too, if you want — they're still fun!)

Yes, Daenerys and Jon are a slightly controversial duo for fans of the series, not only because it turned out that they were related, but also because Daenerys and Jon didn't exactly have a happy ending in the last episode. I won't spoil it for anyone who somehow hasn't seen it or heard about it yet, but... it was rough. Suffice it to say that there are a lot of people who don't think these two should have ever been together, and so your couples costume will definitely get a reaction!

Here are a few Halloween costume ideas based on Daenerys and Jon that you should definitely consider trying out: