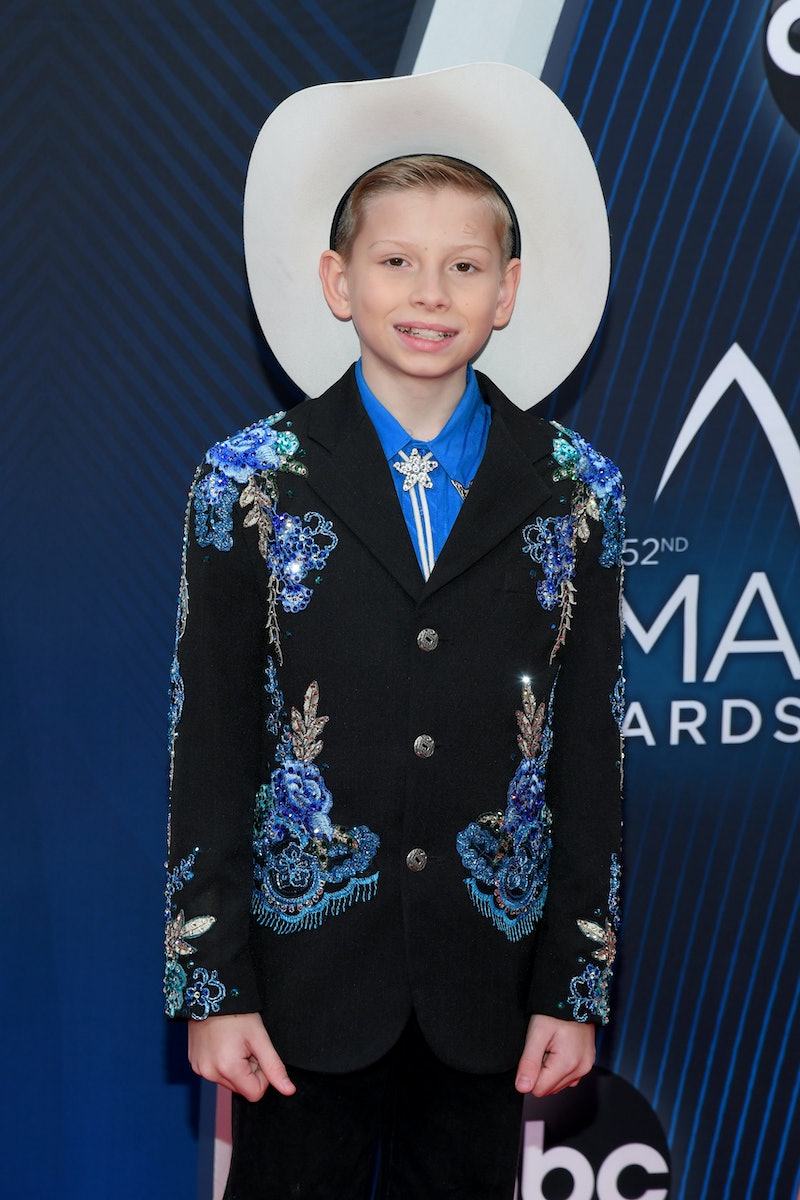 It's a Hollywood fairy tale for the ages: boy yodels in Walmart, boy becomes musical sensation and now, boy is set to perform at the Grammys, all at the age of 13. But before he takes the stage at the 2020 Grammy Awards, it's worth revisiting a few of Mason Ramsey's best yodeling videos and revisit some of that down-home charm before the stars hit the red carpet on Sunday, Jan. 26.

In case you've missed his rise to fame, Ramsey — aka the "Walmart Yodeling Kid" — went viral in April 2018, after sharing a video of himself singing Hank Williams' "Lovesick Blues," wearing a red bow tie and a belt buckle almost as big as his voice. Before long, he was making appearances on The Ellen DeGeneres Show, releasing original music, and even performing at Coachella during the same weekend as Beyoncé.

In 2019, Ramsey also contributed to a remix of Lil Nas X's massive hit single "Old Town Road" alongside rapper Young Thug. According to Rolling Stone, Ramsey is set to join Lil Nas X, Cyrus, BTS, and Diplo to perform the song — which is nominated for Record of the Year — at the 2020 Grammys. But before he joins a slew of the biggest stars in music to perform the biggest single of 2019, it's worth taking a look at what made Ramsey so famous in the first place: his exceptional yodeling videos.

Before he was a viral sensation for singing in Walmart, Ramsey was a 10-year-old country fan filming Hank Williams covers in his bedroom. The singer posted this earlier take of him singing the song that made him famous in June 2017, and while the yodeling skills in this video might not be as iconic, it's easy to see that Ramsey was basically born to be a country star one day.

After Ramsey told Ellen DeGeneres that it was his dream to sing at the Grand Ole Opry, the talk show host arranged his first-ever concert in April 2018. No matter what you were doing at the age of 11, there's no way it was cooler than what Ramsey was doing.

Just because he's a full-blown country star now, that doesn't mean that Ramsey has forgotten what caught everyone's attention in the first place. In July 2018, he released his first EP, Famous, featuring the song "Yo Da Lady Who," which took the classic yodeling phrase and turned it into a clever, wordplay-filled chorus.

You know what more country-pop songs need? Yodeling in the chorus. Thankfully, Ramsey is here to remedy that with his newest single, "Twang," which borrows the melody for the chorus from the riffs in "Lovesick Blues" that made him famous in the first place. And yes, he does reference his nickname — "Lil Hank Williams" — in the process, just to bring everything full circle.

The Queen Bey wasn't the only one who made history at Coachella in 2018. Before Beyonce changed the game with her epic "Beychella" performance, Ramsey made a surprise appearance alongside DJ Whethan on April 13, where he performed "Lovesick Blues" and managed to make even Justin Bieber a fan of his old school crooning.

"I am the yodel drum," Ramsey captioned this video, of him goofing around backstage at one of his shows, which means we shouldn't be surprised if "yodel drums" become the next big thing in music. After all, he managed to make bow ties and belt buckles cool again, so there's no limit to what he can do.

Ramsey may be making his Grammys debut at the age of 13, but it's likely that he will be back in the future — and hopefully, he'll be able to bring some of that twang with him.