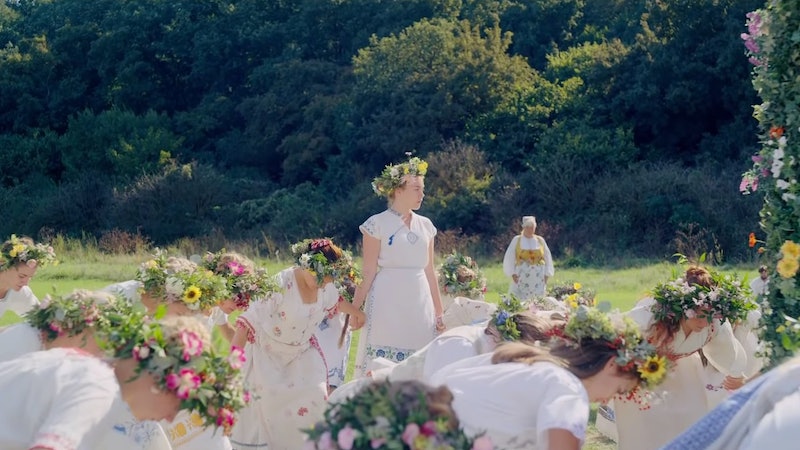 Midsommar doesn't seem like your typical horror film: it's full of sunshine and flower crowns, and it's about a festival that celebrates summer. But it's definitely a terrifying horror film. Brought to us by the director of Hereditary, Ari Aster, Midsommar is a creepy folk horror story about an American couple and their friends who go to Sweden for a summer solstice festival hosted by the Swedish Hårga commune. Although they assume it will be a happy-go-lucky, relaxed boho festival, it ends up being full of rituals and horrific moments... and that's all I can say without giving away too many spoilers. That said, there are some great Midsommar Halloween costume ideas if you're looking for something to wear during the holiday that's both creepy and striking.

In all actuality, Midsommar costumes are probably going to be a pretty option this year. Not only are they relatively easy to put together, but you'll probably be able to wear these pieces even when it isn't Halloween. Aside from those logical reasons, it's also just a good spooky costume idea for horror movie lovers who will really appreciate it... and it's on the more unique side.

If you're looking to creep out everyone who's seen the film and get a good costume going, here are a few ideas on exactly what to wear:

More like this
Meet The Disney Imagineer Bringing 'Guardians Of The Galaxy' To Epcot
By Charlie Mock
5 Crystals To Manifest More Money
By Megan McCarty
Starbucks’ Chocolate Cream Cold Brew Tastes Like This Retro Candy
By Emma Garza
The Meaning Of Angel Number 555, According To Numerologists
By Kristine Fellizar
Get Even More From Bustle — Sign Up For The Newsletter