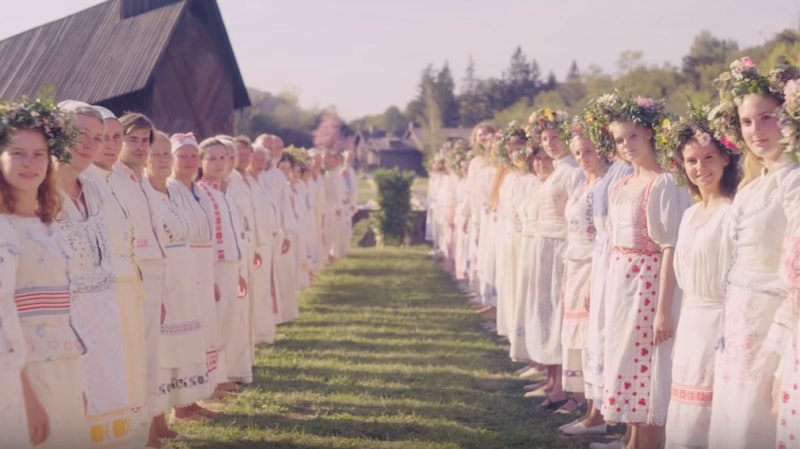 Midsommar, the latest film from Hereditary filmmaker Ari Aster, has a vibe best described as "freak folk" — a creepy modern day take on rural traditions. The four Americans who drop in on the once-every-90-years solstice ceremony hosted by the Swedish Hårga commune, assume they'll get to soak up some midnight sun amid Coachella-meets-Kinfolk environs. But the sunny fields, group meals, enormous Maypoles, and most eerily, everyone in Midsommar's bright, embroidered white costumes add up to the unsettling feeling that something's off about this idyll. Spoilers ahead.

Those garments are the work of costume designer Andrea Flesch, who had a tall order to fill. Between hand-embroidered runes, coded colors, and historic research, the costumes in Midsommar say nearly as much as the characters wearing them. Speaking over the phone the week of the film's release, Flesch says that the rare combination of "all the head of departments worked together very closely... just throwing ideas together," along with Aster's humanity and vision, made working on the film "really one of my best experiences ever," merging interpersonal creativity and world history into a unique visual style.

The film mostly follows Dani (Florence Pugh) as she struggles to hold on to a mediocre, resentful relationship in the wake of unimaginable family tragedy, tagging along on boyfriend Christian's (Jack Reynor) guys trip to the northern Swedish commune. The Hårga live and practice old ways, something Dani doesn't immediately pick up on, despite the shock of seeing them for the first time.

Dressed in muted colors and looking like typical Eurotrippers, the group of outsiders walk through a golden, sunburst entryway into the living past, as commune members walk goats, dance, and greet the visitors in immaculate white outfits. "Ari knew that he wanted to have [the Hårga] in white, and also that we have to do close as possible to Swedish folk costumes", Flesch says, "but from there, I get to give my ideas."

Though initially focusing on Swedish history, Flesch says her research soon turned up a deeper, broader connection. "I found out that folklore in the whole world has something in common," she says. "So I started to search the whole world, what are the similarities in Swedish folk and other folk... and I found a lot. So the traditions were my idea, to use other countries' folk customs, which are similar, because there’s this idea that everything is one in the end."

It also became a practical decision. "First the idea was to go to Sweden, but then I searched a little bit and we found they don’t really have any more, these costumes and materials," Flesch explains. Sweden also has pretty stringent shooting restrictions, so Aster opted to shoot in Hungary instead. Flesch says that, for her, it was a lucky choice.

"Here you can find all of the fabrics, so I bought tons of 100-year-old linen fabric and embroidery, and I tried to find embroideries in Eastern Europe which looked like they could be also Swedish," she says. She made these fabric choices partly to save time, but also to find inspiration.

"We used a lot of original embroidery which we copied and shaped, and also we made a a lot of new embroidery — there are very good people here in Hungary who can make it," the designer says. The artists had to be careful that the clothing didn't look too perfect though — the Hårga make everything themselves, including their outfits.

That handmade quality also indicates that the markings on the garments are meaningful clues. It's not so surprising that runes are strewn all over the camp — they're the non-Latin alphabet of Nordic people, and used as commonly. But their use as protective markings and words also turn up on walls, objects, and even the Hårga's clothes. Flesch says the worn runes were either painted or embroidered by her team. Even some of the women's shoes feature a painted rune, though those may be difficult for an audience member to spot.

Aster and his collaborators went so far as to create not only a full history and culture of the Hårga, but even their own form of runic language, called Affekt. "Everybody has his own sign. His own rune," Flesch says of the characters' unique markings. "It’s the person’s personal story."

When it came to the other Hårga traditions and rituals, especially their intense final sacrifice, Flesch had to rely on her own imagination for each victim's distinct symbolic outfit. Fortunately the Hårga weren't the only empathetic group on set.

"These [costumes] are not coming from some original historic thing," she says. "But also Henrik [Svensson], the production designer, we work together very closely. Sometimes his designs inspired me, or sometimes he asks me to design a costume and then he adjusted his designs to the costume. And a lot of people were helping us: the people who drew the runes, all the paintings on the walls... these paintings inspired me and I used motifs from them on the costumes."

One of the stronger arguments that Midsommar isn't actually a horror movie is exactly this kind of Hårga thoughtfulness and group support. Even the color palette reflects this. As the film plays out, Midsommar moves from its initial white to separating out all the individual colors of the rainbow.

Flesch explains, "It was Ari’s idea that the people who will die, they wear gold. Because he created a color code... the whole film starts in white. The first ceremony, the Attastupans, they wear blue and gold, and gold always comes back when somebody dies. The May Queen ceremony, it was green of course, the animal sacrifice was red, and as we go further, more and more colors, and the color became more intense in the final [ceremony]."

The ultimate culmination of the spectrum is the final May Queen outfit: a gorgeous pyramid of flowers Dani heaves around with her. "That was the goal, that it should look as if she’d just put on the whole meadow," says Flesch. It was one of the most difficult outfits to construct. "We made this dress from around 10,000 flowers," the designer recalls. "First we had to make a pattern for the base of the dress, and under the dress there was like a hoop skirt, you know, to give it the contraction that she can really wear it."

Well, maybe it wasn't the most difficult ensemble for Flesch and her team to handle. The real horror show was keeping all those white clothes pristine during an outdoor film shoot. "We had a to wash a lot," Flesh laughs. "A lot."

More like this
These 25 International Horror Movies On Netflix Prove Fear Is A Universal Language
By Bustle Editors
What’s New On Netflix: Ana De Armas’ 'Blonde' & A Nick Kroll Special
By Arya Roshanian
12 ’90s Movie References You Missed In 'Do Revenge'
By Radhika Menon
Florence Pugh Reflected On Her ‘Don’t Worry Darling’ Experience On Opening Day
By Brad Witter
Get Even More From Bustle — Sign Up For The Newsletter