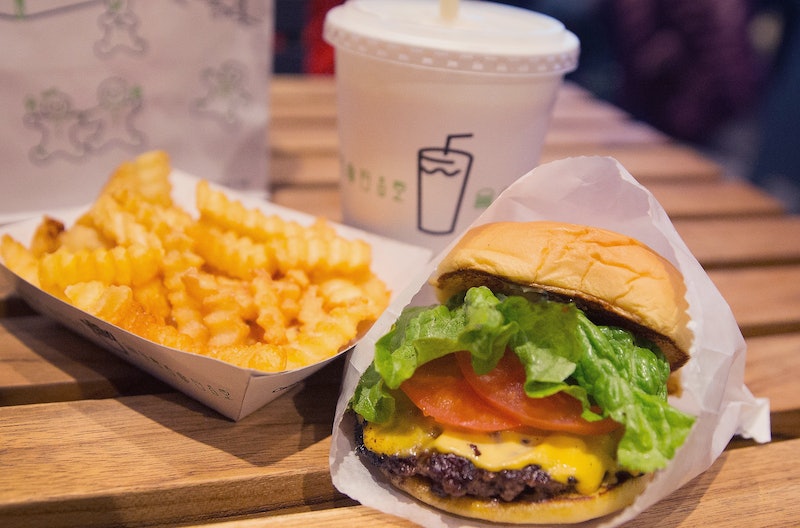 So goes the old playground saying: secrets, secrets are no fun, unless they have to do with hidden menu items at your favorite fast food place. In the age of the internet, secret menus have become so ubiquitous, they should really be called “not-so-secret menus" — Shake Shack secret menu included. It joins the ranks of In-N-Out’s secret menu, which touts animal style sauce and french fries in burgers. There’s the ever-growing Starbuck’s secret menu, the bane of every barista’s existence. But have you taken full advantage of everything on the Shake Shack secret menu? Follow me, as we journey into a secret menu of burgers and ShakeSauce and french fries. Oh my!

At one time, there was rumored to be a Peanut Butter Bacon Burger on Shake Shack’s secret menu. However, as the company noted in a tweet, they’ve removed all peanut products from their menu for allergy. “While some items are prepared in facilities where peanuts and tree nuts are present,” Shake Shack’s FAQ page states, “every effort is made to prevent cross-contamination.”

Earlier this year, Shake Shack had a Game of Thrones secret menu, a promotion in honor of the series coming to an end. The menu includes two items: the Dragonglass Shake (a combination of mint and white chocolate and topped with toffee-like bits) and the Dracarys Burger (two Shake Shack Monterey Jack cheeseburgers, topped with spicy ShackSauce and bacon). The catch? You had to order in Valyrian to actually get the food.