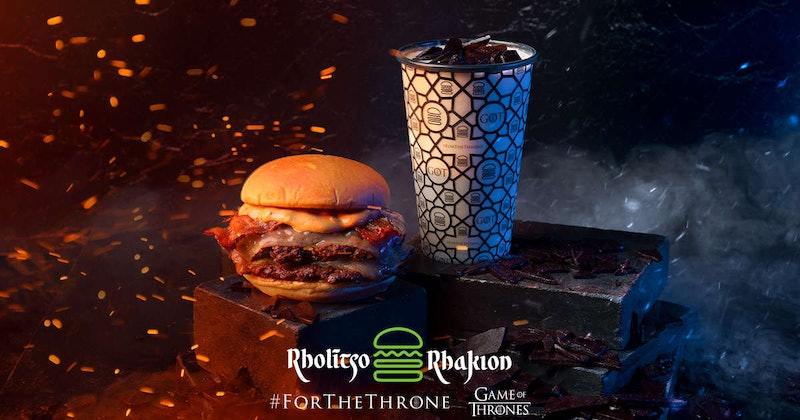 I can't say much about what's in store for the forecast of April aside from "endless tears and self-inflicted misery," given that Game of Thrones is probably poised to kill at least 98 percent of your favorite characters during its final season. But at least you'll have a way to replenish all that lost liquid and electrolytes, because Madison Square Garden's Shake Shack has a secret Game of Thrones menu. What makes it so secret, you may ask? Well, my fellow hungry dweebs, the trick is that you have to speak Valyrian to get your hands on it.

Valyrian, a language with grammar and pronunciation rules created by David J. Peterson for the television adaptation of Game of Thrones, is known primarily to families of nobility in the fictional universe — which is why you've heard characters like Daenerys and Tyrion speak it during key points in the narrative. Now, though, the task of speaking it is entirely on you, so long as you want to order anything off of the secret Game of Thrones menu at the Madison Square Garden Shake Shack in New York. Luckily, Shake Shack distributed a how-to guide to help you do just that.

But before you go off shove a fictional language in your brain, you probably want to know just what you're doing it for — and y'all, the treats on the secret menu are more than worth it. Per Gothamist, option one is a Dracarys Burger; here's how Shake Shake describes it:

The Dracarys Burger (Drakaro Parkliapos) features a double Monterey Jack cheeseburger sourced from the finest head of cattle The Seven Kingdoms has to offer. Griddled by the fires of Drogon and Rhaegal, the burger is then topped with a fiery ShackSauce created from herbs and spices sourced from the conquered cities of Yunhai, Meeren and Astapor. The final touch are slabs of bacon imported from Essos — a Dothraki delicacy. Caution: may be too hot for non-Targaryens.

Your next option is a Dragonglass Shake, which is, per Shake Shack:

In keeping with Shake Shack’s (Rholītso Rhakion's) commitment to premium ingredients + thoughtful sourcing, the Dragonglass Shake (Zīrtom Perzomy Rholītsos) is a prime example of the Wall to Table movement. Custard is frozen with packed snow harvested beyond the Wall and hand churned by members of the Night’s Watch. Final prep occurs in Winterfell, where the shake is topped with shards of Dragonglass imported from the caves of Dragonstone. Please note, supplies are limited as the Wall is currently undergoing major renovations.

So how do you go about ordering these? Here's how, according to Shake Shack's Valyrian For (Hungry) Dummies:

After that, all you have to do is cross the Narrow Sea, fight off a White Walker horde, and gut every other competitor coming for the Iron Throne, and boom! Dinner is served.

Per Gothamist, the New York City-based Shake Shack location in Madison Square Garden will be serving the Dracarys Burger until April 21, and the Dragonglass Shake through May 19, giving you plenty of time to hightail it over if you're within driving (or dragon-flying) distance. Winter is coming, y'all, but at least a bunch of Shake Shack deliciousness is coming, too.

More like this
Side Character Energy Has Arrived — Here’s What That Means
By Sophie McEvoy
This TikTok Hard Seltzer Hack Involves A Milk Frother
By Alexis Morillo
On TikTok, Orange Wine Is The Varietal Of The Summer
By Madeleine Aggeler
Is The Insta-Famous Always Pan Actually Worth It?
By Jessica Goodman
Get Even More From Bustle — Sign Up For The Newsletter