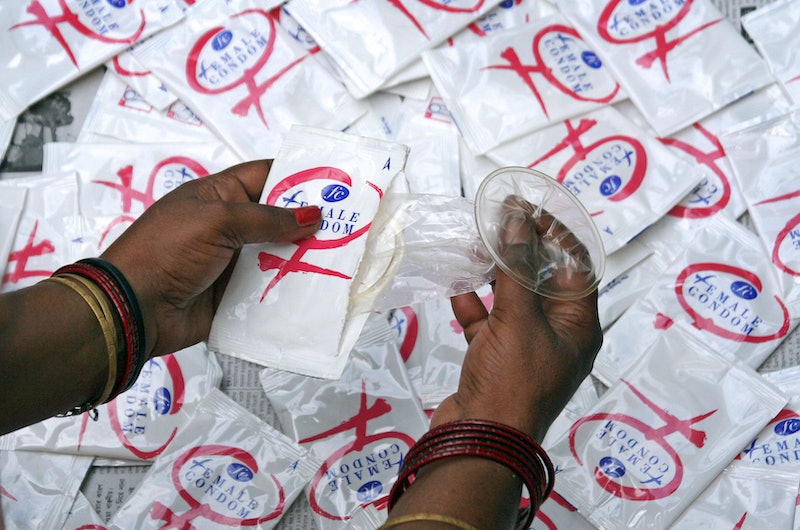 When it comes to protecting yourself from STIs and unplanned pregnancies, condoms are pretty standard. A lot of us can remember that “condom on a banana” demo that we got in high school sex ed, even if we giggled through the whole thing. Plenty of us even had access to free external condoms in school or in local clinics, like Planned Parenthood. And if you’ve had intercourse, chances are pretty good you’ve used one yourself. But how many of you have ever used a female condom? I’m going to guess “not many.”

“Male condoms have merely become the gold standard,” Rachel Gelman, DPT, tells Bustle. “Probably due to marketing, things like Trojan Man made the male condom more mainstream. Also, a male condom is more compact and discreet compared to the female condoms I have seen.”

While these condoms are commonly known as “female condoms,” I'm going to use “internal condoms” from here on out because it’s more accurate — and it’s gender neutral. Internal condoms are one of the many options out there for people who are looking to have safer sex, but they’re not talked about much. So as a certified sex educator, I'm going to fill in the blanks and answer any questions you might have about internal condoms!

More like this
An Honest Review Of The TikTok-Famous WalkingPad
By Kaitlyn Wylde
I'm 42 & I've Never Had Sex. Is It Too Late?
By Sophia Benoit
How To Protect Your Digital Privacy If You Need An Abortion Post Roe v. Wade
By Kaitlyn Wylde
5 Crystals For Anxiety
By Megan McCarty
Get Even More From Bustle — Sign Up For The Newsletter