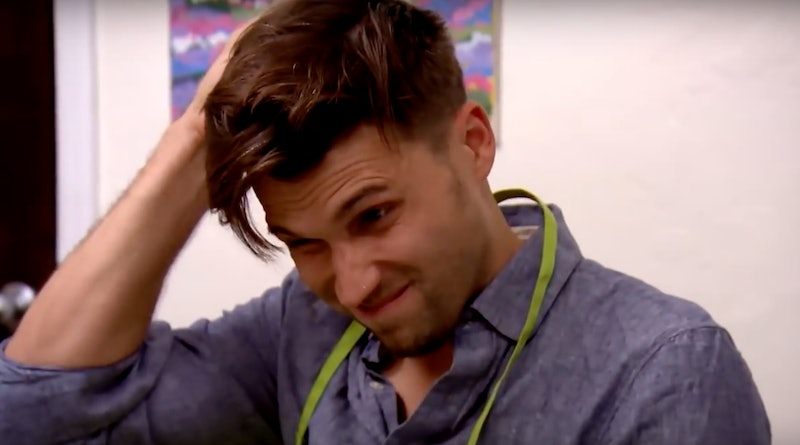 Right we thought the delicious Double Decker Taco Supreme that was Monday's episode of Vanderpump Rules was over, Bravo showed up with just the thing to keep the party going for a minute or two longer: a highlight reel for the latter half of Pump Rules Season 5. Yes, my friends, we have ourselves a midseason trailer. A Sexy Unique Midseason Trailer.

I’ve watched this midseason trailer somewhere between 10 and 15 times. I’ve studied every second, searched for clues that may or may not be there, and read into every bit of dialogue. And because I am me, I most SURtainly formulated some totally sound predictions.

What do I think the second half of Pump Rules Season 5 holds? What do I think is going on in the trailer? Where will the rest of this season take us? What does any of it mean? Here are some guesses:

As Scheana and Kristen make it rain at Katie’s bachelorette party, one dollar bill hits the bride-to-be right in the eye. Katie's eye turns bright red and begins to water. She considers going to urgent care, but then figures her eye will eventually calm down on its own. (Her eye stays red for the rest of the trip.)

Before the group goes out to dinner that night, Stassi surprises Katie with a bedazzled eyepatch. "You can be a pirate," Stassi tells her. "But instead of rum, you chug tequila."

"You're Tequil-ARRR Katie," Kristen says, a smile creeping across her face. "Get it? Like a pirate."

Katie puts the eyepatch in her bucket bag and asks if anyone has any eye drops.

Katie sighs and puts a mini bottle of tequila in her bucket bag.

As Lisa looks at the pics from Stassi’s sheer catsuit photoshoot, she realizes the sheer catsuit is the new SURver uniform she’s been looking for all along.

After he takes off his Debbie Harry wig, Tom Sandoval stares at the blond hairpiece longingly. He looks at his own reflection in the bathroom mirror. He opens up the cabinet underneath the sink and retrieves a bottle of hydrogen peroxide, puts down some towels, and turns on the exhaust fan. And then, he dyes every last strand of his hair blond. As the chemical burns his scalp, he says, "My name is Draco Sandoval. Wingardium Leviosa."

Ariana knocks on the bathroom door and asks Sandoval if he's watching Harry Potter on the toilet again. Sandoval tells Ariana he will find out soon enough.

In an attempt to bring an end to their feud, Tom Schwartz invites Stassi and Ariana to a wine and paint night. As the trio nurses goblets of pinot noir, an instructor shows the class how to paint a willow tree that's shaped like a glass of champagne. Ariana makes a joke about woodsy elegance. Stassi erupts. Ariana rolls her eyes. Schwartz crumples onto the floor of the art studio, assumes the fetal position, and wishes he hide could in the willow tree he just painted on his canvas.

“It’s not that kind of roast, Jax,” Sandoval laughs.

“Standing rib roast? Even better.” Jax rubs his hands together as the Toms place a crown atop his head. “A king’s hat for a king’s meal. This will be the best birthday ever.”

“This is the day that we’ve all been waiting for,” officiant Lisa Vanderpump tells the Bubbas’ wedding guests. “For it is the day Gordo Von Friendenheimer put on the finest dog tuxedo money could buy.” And then, Gordo the dog emerges from behind a tree stump, scampers up to the altar, and starts digging into the patch of loose soil at Katie and Schwartz’s feet. After a few minutes of furious excavating, Gordo paws at Schwartz. Schwartz kneels down and sticks out his hand. Gordo drops two wedding bands onto Schwartz’s open palm. The wedding guests give Gordo a standing ovation.

I don't know about you, but I cannot wait to see what does or does not happen.

Whew, all of that SURthsaying really tuckered me out.