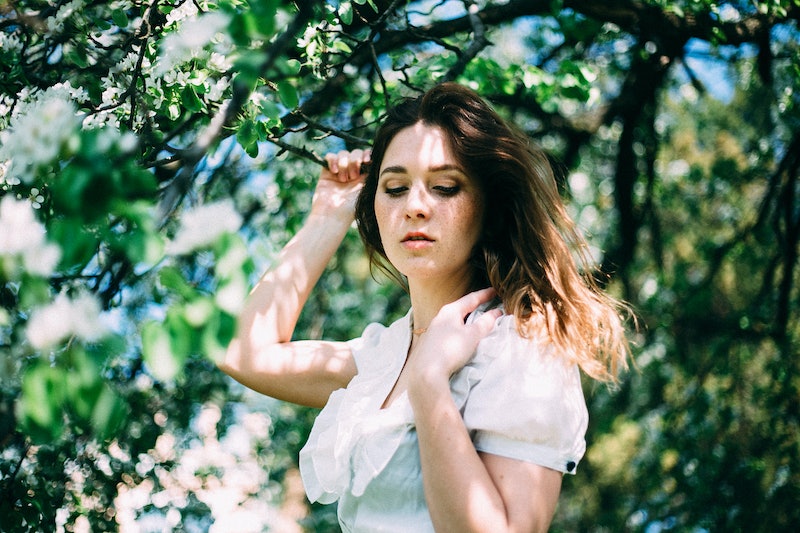 For some signs, the effervescent, sparkly radiance that is Leo season can have a huge effect on their day-to-day lives. Suddenly, they find the spotlight on them and the urge to flex feels stronger than ever. Even if they weren't planning on putting them selves out there, they do. But for the zodiac signs will be affected the least by Leo season this year, August is actually pretty low key. Despite the fact that the sun is shining and everyone around them is out and about, these signs might be feeling an opposite inclination to hang low at home, stay quiet, stay small and keep things subtle.

No matter how Leo season affects you, you'll want to know what to expect so that you're not taken by surprise. Considering the fact that Leo is easily the Beyoncé of zodiac signs, you might want to know ahead of time if you're going to suddenly feel the urge to lean into your most fierce persona. Bustle talked to astrologer Kyle Thomas about the signs that aren't really going to be affected by the Leo energy. While in small ways these signs might feel a little bit of astrological encouragement to be noticed, your Leo season isn't going to be too out of character from the other astrological seasons of the summer. According to Thomas, these are the signs that won't feel the glitter glow of Leo season's ~extra~ aura:

According to Thomas, you'll be feeling a bit more like a homebody than many other signs this Leo season, but that's OK. You’re actually evaluating important relationships and your emotional life now which is a healthy priority and one that will serve you during this time. Head into Virgo season with a clear head and a full heart. You're not sitting Leo season out, you're just living it up in a different way.

"What do you value in your life, Cancer? You’ll be spending a lot of time thinking about this," Thomas reveals. For this sign, Leo season will mean contemplation and future planning. "If you are on the right track and the seeds you’re laying are strong, you’ll be able to build a life of abundance. But if you’re spinning your wheels and nobody is buying what you have to offer, perhaps you need to shift direction," Thomas says. And this is what your mind will be focused on while many of your friends are out just having a good time and enjoying Leo season without these anchor-like thoughts. That's OK though, it all balances out in the end and this is what's best for you right now.

Though Virgo season is near, this sign is in low-key mode. Thomas tells Bustle that it’s time to rest, relax, and recharge for Virgo. "Self-love is favored now," Thomas says, despite the fact that many other signs will currently be turning their attention outward. "Contemplate what you want to do in the coming year so that when birthday season hits, you can launch your greatest endeavors." Aka, it's the calm before the Virgo storm.

"For the free-spirited Sagittarius ready to set sail overseas, this actually could be a time when you see new horizons," Thomas tells Bustle. Though you might be inspired by Leo season to seek out adventure, you likely won't because you'll find yourself even more interested in turning your attention inward. "This may be a time when you’re snuggling up with a new spiritual, meditative, or academic practice."

Sorry Capricorn, Leo season is looking pretty serious for you, but that's OK, because it's what you're used to. According to Thomas, you'll be spending most of your time focusing on relationships. During Leo season, "you're actually going to be having a lot of time to think about and discuss what you give and receive in your important partnerships." That said, Thomas encourages you to lay low, listen, think and try not to be too reactionary.

Thomas tells Bustle that Pisces is going to be craving some work/life balance during this time. If you're not happy with the dynamic you've created for yourself, you're going to feel it during Leo season, but you likely won't be motivated to do much about it. "Either way, you’re going to be focusing less on the “fun” and more on the “schedule” during this time," Thomas explains.