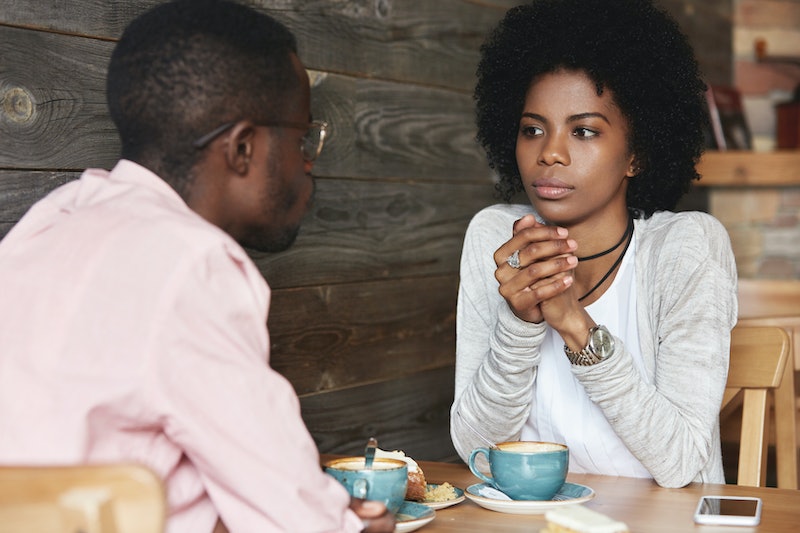 A lot has changed in the six months since Donald Trump was sworn into office, both on a political level and a personal one. Bustle’s State of Our Unions series looks at how millennial women's relationships with their friends, family members, and romantic partners have been affected since the 2016 election. Today's topic: 673 Bustle readers tell us how their sex and dating lives have changed since Trump was elected.

Dating, even under the chillest of circumstances, can be tricky. Dating when you're stressed AF over the tumultuous state of our country's politics? That's a whole new experience entirely. Whether you are a Democrat or Republican, single or in a long-term relationship, life doesn't look exactly the same as it did prior to the 2016 election — and that definitely extends into the realm of sex and relationships. But, just how have people's dating lives changed since the election, exactly? We surveyed 673 Bustle readers to find out.

While 64 percent of readers say they go on just as many dates now as they did before Trump, 6 percent say they go on even more dates now than they used to. So then, what's changed? For starters, our priorities. "I am now more aware that I want someone that is well informed, can speak intelligently, and does not have blind allegiance to a particular political party," one survey respondent told Bustle.

Of course, there are many reasons why someone's love life may have changed in the last few months, and not all of them have anything to do with Trump or the new administration. Yet, there's no denying that the results of the 2016 election have had an effect on many of us in one way or another. And, if you're wondering how your current dating life stacks up in this post-election world, read on.

To start, we asked our survey takers to introduce themselves by naming their political party affiliation. Answers from the 6 percent who identified as "other" include "None," "I'm on the fence," and "I focus on the issues, not a party affiliation."

Are People Willing To Date Others With Different Political Views?

The majority of people we questioned said that currently, they would prefer to date someone with the same political affiliation as them — but a date with someone from an opposite party isn't totally out of the question. In fact, many people said they weren't about to let the stress of the last election keep them from finding their soulmate — 13 percent said they would "absolutely" date someone with different political views.

Even though 50 percent of people surveyed said it wasn't a total deal-breaker to date someone with a different party affiliation, 43 percent of respondents said it has become more important to them to find someone who shares similar views since the 2016 election. One woman who responded "other" said she "would not be able to date a Trump supporter, but I would date conservatives or liberals, or someone in the middle." Another said, "I care less about political views, but more about values and morals."

Is It OK To Talk About Politics On A First Date?

It may *seem* like all anyone wants to talk about these days is politics, but apparently that's not the case — at least when it comes to first dates. Despite the current political climate, 25 percent of people said they are even less likely to talk about politics on a first date now than they were in 2016.

How Many People Are Even Going On Dates RN?

A lot has changed since Trump took office, but not everything. Sixty-four percent of readers say they're still going on the same amount of dates now as they did before the election, thank you very much. But while millennial women might be going on the same amount of dates as they used to pre-Trump, what they hope to get out of those dates is changing.

Whether they are seeking out more serious relationships or are looking for more casual hookups, 13 percent of readers say their dating goals have changed — and the reasons vary. "Let's keep it casual since we're all doomed anyway," one woman said. Another was more straight to the point about her dating priorities these days: "Not interested."

How Has Sex And Birth Control Use Changed?

More than 14 percent of people said their sex lives have changed in one way or another since the 2016 election, whether they're having more sex or less sex than they did in November. Some women credited things like stress and depression for switching up their sex lives. Most, however, reported no change. As one woman put it: "Politics don't really play an important role in my sex life."

Remember when everyone wanted to know if they should *actually* get an IUD? According to Bustle's survey, only 4 percent of respondents said they went through with it.

Are Our Dating Priorities The Same?

Overwhelmingly, respondents told Bustle they are prioritizing finding someone who shares similar values, even if they don't share exact political beliefs. "I'd rather date someone who is open to discussion and debate over political matters, no matter what their political views are," one person said. Another respondent got even more specific about what they're looking for in a partner: "I want to be with someone who values the environment, women's health, and basic human rights."

So is romance dead in this post-election world? Not in the least — but it may look a little different than it used to, depending on who you talk to. We asked Bustle readers to explain how their romantic lives have changed, if at all, since November 2016, and answers ran the gamut: Some couples have bonded over their shared political views, while others are seriously feeling the strain of the present state of affairs.

"Stress makes romanticism less attainable," one reader said. "It's too emotionally tiring on top of the emotional toll of the current political climate."

But that doesn't mean people are willing to give up on love and dating altogether, either. After all, life goes on, and as one reader put it, this is a time when being open-minded to other people's opinions, lifestyles, and experiences has become more important than ever: "The only change has been more intense and meaningful conversations about the political ambiance," she said.

And, if you're one of those people who *haven't* experienced any change in your romantic life since Trump was elected? Congratulations! Dating is always going to be stressful — regardless of who's in office.