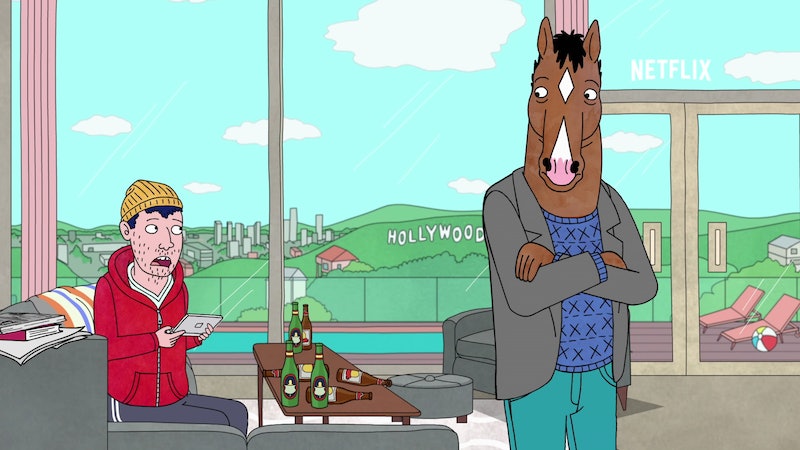 TV shows for adults can be great when they're made with your humor, age, and experience in mind. And whether they focus on your need for nostalgia or hit home with some real life drama you're going through right now, a lot of TV for adults can be super relatable. Sometimes, though, people don't realize that cartoons are worth watching, especially because in the past, there were only be a handful of high-quality animated series geared towards adults. Now, though, there are tons of animated series on Netflix that adults will love.

Animation for the over-18 crowd can be pretty raunchy — sometimes more so than live-action dramas or sitcoms — so prepare for plenty of that on this list. Normally, animated shows don't get a ton of prestige, but sometimes these are the types of series the truly make us feel better and deserve way more attention than they get. They can make us have a laugh after a bad day or bad breakup, or give us something to relax with when we get home from work. Sometimes adult-focused animated shows are the most enjoyable form of entertainment, and these are just a few of the ones that exist on Netflix.

The most recent season of this acclaimed series — its fifth — premiered in September, and the episodes are ready to stream ASAP. The show follows BoJack, a has-been '90s sitcom star (and horse), as he tries to become relevant to Hollywood again. If his being a horse didn't tell you anything, in this world, humans and anthropomorphic animals live together and interact as if they're all the same species.

A new show, Disenchantment follows Bean, a medieval princess who doesn't really want to be one. She doesn't want to marry and would rather live with a carefree attitude and a lot alcohol. The show got mixed reviews, but it's from the creators of The Simpsons and Futurama, so it might be worth your while.

Even though Big Mouth is about pre-teens going through the horrors of puberty, it is not a show for kids. It's actually a super relatable retelling of how hard adolescence and hormones can be, from the perspective of adults who have — thank god — already survived that part of life. Some people thought it was so vulgar, that it needed to be banned, but creator Nick Kroll has not backed down. Season 2 premieres Oct. 5.

Aggretsuko is about anthropomorphic animals, and stars a a red panda working in an accounting firm in Japan. She feels so restrained all day, that every night she goes to sing death metal at karaoke. It's all based on a Sanrio character of the same name and, if so inclined, you can buy merch of Aggretsuko.

Featuring the voices of Jaden Smith, Susan Sarandon, and Jude Law, this anime is about an alternate New York City that exists in a sort of utopia state, until demons and other bad events start happening. Smith plays the main character, Kaz Kaan, and the show is filled with absurd, dry humor.

From the creators of Brickleberry, this crude comedy focuses on an American police precinct. It's pretty wild, but if you're a fan of silly humor or pop culture references, this is for you.

Starting its third season, intended to come out in November, F is for Family is set in a '70s American household. The main character, a dad named Frank Murphy (Bill Burr), is foul-mouthed and a stereotypical "man's man" of the time. Laura Dern plays his wife Sue Murphy, who tries to steer him in the right direction raising their kids.

So, if you like mild-mannered comedy, anime, inappropriate humor that'll make your sides hurt, or just need something to get your mind off those suspenseful network dramas, Netflix has you covered. At the rate the streaming service is going, more shows are sure to be introduced soon, and the quality will keep getting better and better. Plus, with Netflix, the release dates are pretty quick and reliable, so you won't have to wait too long for your fave animated show to drop a new season.