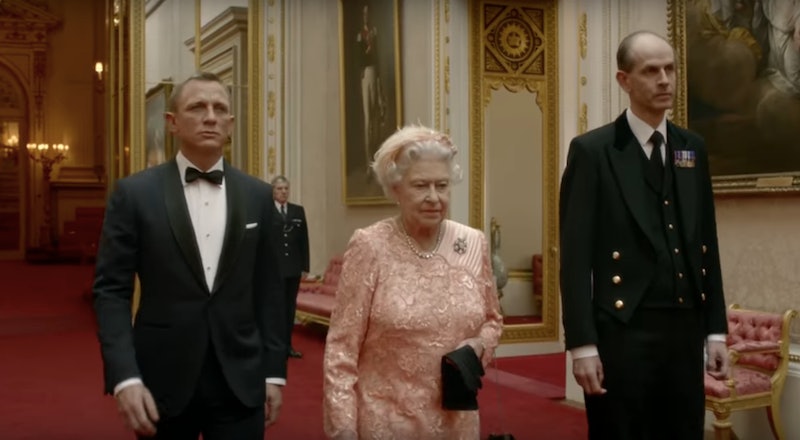 There may be a professional actor who is a British royal now, but Meghan Markle is not the only member of the family who has tried her hand at acting. There have been several British royal family cameos in movies and TV shows over the years, and surprisingly, there is a lot of variety amongst them. And, yes, the Queen herself is even included.

At this point, everyone and their grandma knows that the new Duchess of Sussex was on Suits for seven years. After all, there were a ton of Markle's co-stars at the royal wedding, which is something they certainly never thought would happen when they signed on to the USA drama. In addition to her time on Suits, though, Markle was in commercials, in the movies Remember Me and Horrible Bosses, and was, now famously, a suitcase girl on Deal or No Deal.

Clearly, she has far more experience with acting than anyone else in the royal family has or probably ever will, but that doesn't mean no one else has stepped in front of the camera to try a little acting themselves. While none of these are like, say, Kate Middleton popping up on Game of Thrones or Prince Philip being a surprise extra in the background of Gone With the Wind (hey, he could have done it), they're still pretty entertaining.

Queen Elizabeth II With James Bond At The Olympics

As part of the opening ceremony for the 2012 London Olympics, Queen Elizabeth was in a short movie with Daniel Craig in character as James Bond (which can be viewed here), that showed him picking her up to escort her to the games. And they arrived in style: parachuting out of a helicopter!

The Queen In A Video With Prince Harry

This one wasn't for TV or a movie, but it did involve the Queen acting in order to help her grandson Prince Harry promote the Invictus Games. In the video, Prince Harry receives a message from Barack and Michelle Obama, and the Queen gives a snarky reply to stand up for her country.

Princess Beatrice In The Young Victoria

The Young Victoria starred Emily Blunt as Queen Victoria, but actual royals were part of the production. Sarah Ferguson, Duchess of York, was one of the film's producers and her daughter, Princess Beatrice, had a cameo in the movie as a lady in waiting. This made her the first member of the British royal family to appear in a movie that wasn't a documentary, according to the Daily Mail. At the time, Beatrice was fifth in line to the throne.

This one is the cameo we all missed out on. It was rumored that William and Harry filmed a scene as stormtroopers in Episode XIII for quite a while before it was actually confirmed. Last Jedi star John Boyega commented on the cameos in an interview with The Hollywood Reporter and said, "It wasn't intimidating, it was fun. I thought, like, 'Of course, it's Star Wars, they're going to bring the royal family.' It felt fun. They were in stormtrooper costumes."

Sadly, though, William and Harry reportedly ended up being cut out of the movie. In an interview with BBC Radio 4 (via Variety) Boyega said, "I think they took [William and Harry's] scene out." The Daily Mail reported that a source said the brothers were cut because they were too tall since stormtroopers all have to be the same height: 5'11". Well, at least they got to visit the set and attend the premiere. They can't be too upset about that.

The Duchess of York was on Friends when the show traveled to London for the 1998 episodes about Ross' wedding to Rachel — I mean, Emily. Fergie popped up when Joey had his tourist day. Her cameo can be seen at the 2:30 mark in the behind-the-scenes video above, and she also says that she and her daughters are big fans of the show.

Zara Tindall, Queen Elizabeth's granddaughter and Princess Anne's daughter, is known for being an Olympic equestrian, but she's acted, too. On IMDb, Tindall has three credits to her name: the films Concussion and The Right to Live, and the short In Between Black and White.

OK, fine, this one was not a cameo, but it really should have been. In 2015, Duchess Catherine visited the Downton Abbey set and met several of the actors, including Michelle Dockery and one of the twins, Oliver and Zac Barker, who played Lady Mary's son, George. This made it extra cute because Middleton had her own blonde George back at home.

While there haven't been a ton of royal cameos over the years, hopefully there will be more in the future. Perhaps Markle and Prince Harry can even team up for a new Invictus Games video. She could probably teach him a thing or two.