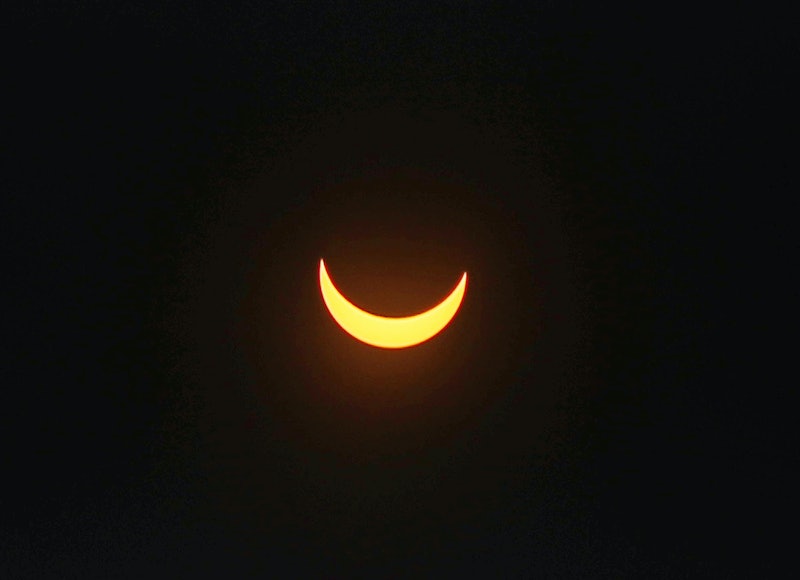 January was a bright month for lunar enthusiasts. The sky was lit up by ~two~ full moons in a single month, including a super moon that was also a blood moon and also a blue moon. Coming off of that bright month, February's night sky forecast is looking a little darker, though. In other words: There won't be a full moon in the month of February but we will have a Dark Moon, otherwise known as a Black Moon, otherwise known as a moon you literally won't be able to see in the sky. And there are some creepy things about the Dark Moon you might want to know about. Don't worry, this isn't Halloween in October and the streets won't be dripping with goblins. But there are a few unnerving things associated with the moon.

First of all, what is a "Dark Moon"? It's also referred to as a "Black Moon" and it basically looks the same as a New Moon. The term is used to refer to either a moon that is the second New Moon in a single month, the third New Moon in a season of four New Moons, or, as in Feb. 2018's case, when there is no full moon in February. The last time this occurred it was 1999 and while some of us were gearing up for an intergalactic millennia, others were sure that year 2000 would mark the end of the world. Coincidentally, Dark Moons have been associated with signs of the apocalypse. But, don't worry, there's no reason to seek out a bunker full of canned beans. While superstitions and creepy facts tied with a Dark Moon might make you feel uneasy, it's really the stark darkness of the night due to the moon's lack of illumination that will send shivers down your spine.

It's The End Of The World

Apocalyptic theorists have toyed with the idea that a Dark Moon that rises is a sign of the apocalypse. San Diego Entertainer Magazine writes, "One theorist states that the black moon signals the end of the world and the end of all life on earth, sort of like an apocalypse." Which might make you feel a little ~uneasy~. But, don't worry, The last time there was no full moon in February leaving us with a New Moon, which is what we call a Dark Moon, was in 1999. And we're all still here.

A Dark Moon is a New Moon. And you might be surprised, or creeped out, to learn that the New Moon is a good time to cut your fingernails.

We all know that the full moon can have an affect on weather. But, a New Moon can too. Sciencemag.com reports, "researchers detected more peaks in rainfall in the days after the full and new moons." The fact that the moon would have a pull on weather patterns at all is creepy in that intergalactic way extra terrestrial horror movies are based on.

Urges of Hatred and Envy

Folklore might insinuate that a Full Moon could make a person feel crazy, but what about a New Moon? Apparently, under the energy of a New Moon, one could start to feel envy and hatred. That's a lot of negativity. If you are feeling that way, focus on the good things. Like moon phases, this will pass!

Because you can't see a New Moon, the sky is naturally dark. On and around a Dark Moon, the sky will be very dark. And that makes things eerie, always.

Astrology website Maga Astrology refers to this moon as "Dark Moon Lillith" and warns, "Black Moon Lilith's retribution is a powerful force of darkness that can cause the most serene beings to become blinded with hatred and revenge." A dark moon with a dark side is a little off putting, to say the least. Resist shoving everything off of your dresser and breathe through feelings of anger and rage as best you can.

You Could Feel A Little Insecure

On top of all those feelings, the moons energy might have the power to make you feel insecure. While the moon might not be illuminated, the dark side is and it could leave individuals feeling ~in the dark~ and therefore, needing something to feel secure.