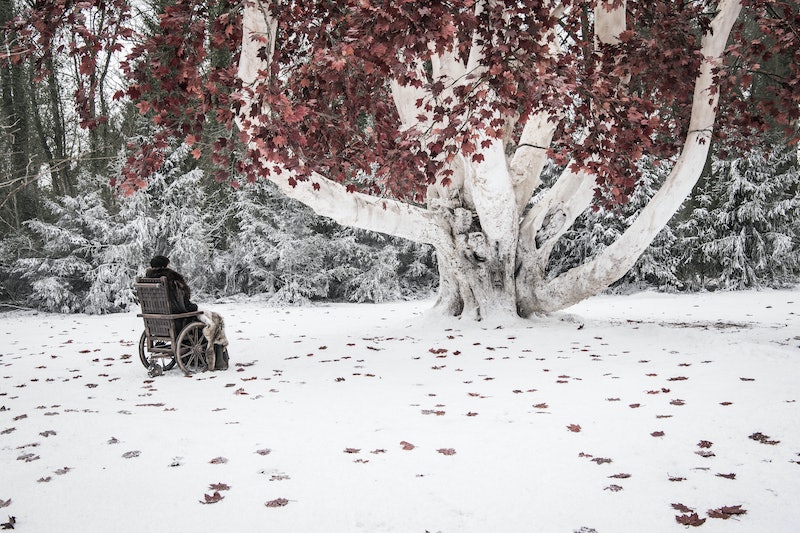 Without George R. R. Martin's books to spoil the finale events, fans are digging deep into Reddit theories about Game of Thrones Season 8 to piece together what's next. Using clues from the show and details from the source material, internet detectives are hard at work. Most of the current theories revolve around the Night King: who he is, what he wants, and whether or not he's actually going to win it all on Game of Thrones. There are also some theories about Bran's peering glances, and whether or not he's actually there. And some old, yet not debunked, theories have resurfaced — for example, the theory that Meera Reed is Jon Snow's sister.

There are also a lot of theories about Cersei's pregnancy, and whether or not her drinking alcohol is any indication that she either miscarried or was lying to her brothers about being pregnant. Here's what I have to say about that: in our world, fetal alcohol syndrome was not recognized until 1973 thanks to modern medicine. The fictional society of Westeros does not even have electricity. There's no way that expecting mothers would know not to drink red wine.

As for new theories that actually carry some weight, here's a breakdown.

1. The Night King Is Rhaegar Targaryen

Ah yes, the old Darth Vader in Star Wars twist. Jon Snow is clearly the Luke Skywalker of this universe, so of course there's a theory that the Night King is Jon's dear old dad.

The theory, which you'll have to read in full if you really want to get into it, posits that somehow Rhaegar Targaryen's consciousness has been transferred to the leader of the White Walkers. It would, at the very least, help explain what the Night King wants.

After proving that Jon Snow is the legitimate son of Rhaegar Targaryen and Lyanna Stark, what do we gain from revealing that Gendry is the true born son of Robert Baratheon and Cersei Lannister? It creates some conflict as to whose claim to the Iron Throne is stronger — however, as King of the North, Jon could just as easily legally legitimize Gendry (the way Roose Bolton did for his son Ramsay) and create the same conflict.

The only reason this might come into play is if Game of Thrones ends with Cersei having to publicly admit her three kids were all her brother's illegitimate children (which she kind of already did with the shame walk), and that the baby she'll likely claim to be having with Euron Greyjoy is Jaime's as well. If she did have one living child in wedlock, that would be an interesting turn of fate.

After "Hold The Door," it seems likely that Bran will pull some kind of time travel tom foolery in Season 8, but what will it be? This reddit theory suggests that Bran warged into Jaime and pushed himself out of the window, thus setting him on the path to becoming the Three-Eyed Raven.

4. This Playlist Hints At Big Returns

An official playlist made by the Game of Thrones showrunners supposedly holds the answer to the series. Redditors have suggested it could be teasing the return of Littlefinger — though to be fair, most fans don't think there are actually any real clues in this playlist, just jokes to send us down rabbit holes. Still, I also spot a potential Hodor reference in there, and a couple of direwolf clues. Plus, the "girl from the North country" is totally Sansa, right?

After the Red Wedding and the Purple Wedding, will Season 8 give us the White Wedding — or a wight wedding, as a commenter jokes? Winter is here, and things like this tend to come in threes, so it's something to consider. Another tragic wedding could round out the series.

6. Jaime Is The Prince That Was Promised

It's not an uncommon theory, but Jaime as the savior is getting a resurgence, particularly after Bran called him an "old friend." Sure, that could be some patented Stark Family dry humor, but it could be foreshadowing as well.

This theory not only attempts to explain what the Night King wants, it also posits that there has been more than one Night King in history. It's a line of succession like any other king, but the way the Night King was supposed to retire and pass his crown to another has been long forgotten. (This theory is also in favor of the theory that Jon Snow will become the new Night King... a deeply depressing idea.)

Mind blown yet? The theories will probably only get crazier in the weeks to come, even as the answers start to pour in. With any luck, when all is said and done, we will have gotten just enough figured out and just enough hilariously wrong to be satisfied.