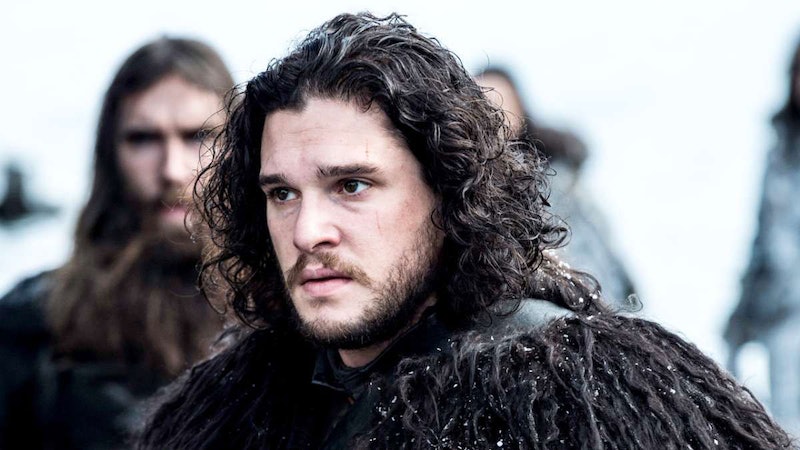 Fan theories for hit shows are pretty wild at the best of times. Some might even say too far fetched. However, when it comes to Game Of Thrones, no theory is too out there because with this show, literally anything is possible. A lot of fans have been raising questions about the upcoming Season 8, such as will Jon Snow become the Night King?

Firstly, the very thought of this being a possibility actually makes my heart hurt. It's almost just a little too much for fans like me to accept or even contemplate. Not our Jon, just no babes. Would you really do that to us, HBO?

Jon Snow, who even makes this old les sigh, is played by Kit Harington. Since the very beginning, he has been uber heroic, honest, reliable, and clever — making him an ideal candidate for king of the Seven Kingdoms, right? Most would agree that this guy, who came back from the dead, is an ideal head honcho. However, so was flipping Ned Stark and they took his head like, clean off in the very first season. Our pals over at Reddit have been doing all the over thinking and analysing so you don't have to. Thanks guys, sterling work. Over thinking yourself into believing that the ultimate hero of Game Of Thrones is going to become the ultra villain of Game of Thrones.

OK, everybody calm down, all is not what it seems with this theory. Nothing is black and white in this twisted world that is Game Of Thrones. Reddit user, Fearsundown explained:

"I think the switch will be Jon will have dragonglass plunged into his chest by Dany, not the other way around, she will be the one to plunge a dragonglass "sword" into her loves heart".

WTF Daenerys? Not cool. This bloke is not only your lover but also like, your nephew. OK, ew, but you get me.

Now, as I mentioned before, all is not quite what it seems with this fan theory. You see, the Reddit world thinks that yes, Daenerys will pretty much stab Jon, but it's actually to save the world.

The genius that is Fearsundown continue:

"The dragonglass in his heart will turn him into the new Night King (ice to her fire) capable of leading the army of the dead (Jon's comment that it isn't as "easy" as killing the NK, I don't think they will all die with the NK, the other White Walkers and their offspring Wights will live, I think they will need to be led) and he will take over the army of the dead and march it north into exile to save Westeros."

OK, so basically, Jon will sacrifice his life, in order to lead the army of the dead, all those creepy AF zombie things, away from the living. Real talk, that is something I could get on with. Really heroic and cool, almost falling on his sword you might say.

But how true is this? It's just a fan theory, right?

Well, actually, Fearsundown's idea was bolstered by recent statements made by the actress Emilia Clarke, who plays Daenerys. During an interview with Vanity Fair, she made dropped some pretty big hints about her final scenes, which she has already shot (OMG).

Clarke explained "knowing that is going to be a lasting flavour in someone’s mouth of what Daenerys is" really messed with her brain. Does this mean the Breaker of Chains really does kill her brother/nephew?

Well, one Reddit use thinks they know exactly what's in store for Daenerys:

"Dany will rule, but without Jon's conscience become bitter and end with her burning Lannisters (maybe Cersei and Varys after a perceived betrayal) alive with a somewhat malevolent/sad feel to it. I don't think it will be uplifting when Cersei dies, it wasn't when Joffrey, Ramsay or Littlefinger died".

Wow. Will Daenerys (after murdering her love) end up like her dad, The Mad King aka the blood thirsty ruler that killed thousands? Like it or lump it, it's a very real possibility.

The countdown continues, and I don't mean to keep bringing it up in my articles but let's just hope the ending isn't as disappointing as Lost. It remains to be seen who will kill who, and who will win this Game Of Thrones and like, if anyone will survive at all considering the zombie-raving monsters currently on the loose. In the meantime, let's enjoy all these theories because whether they come true or not, they really are pretty clever.