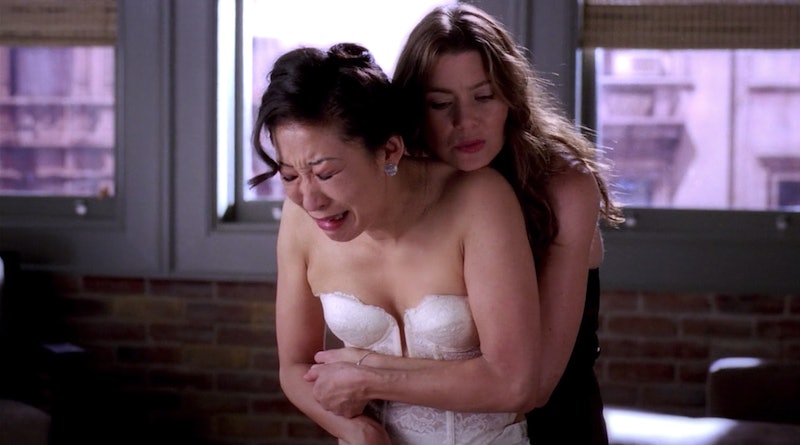 If there's one thing Grey's Anatomy has gotten really good at, it's making fans cry on an almost weekly basis. Yes, there's just something about this show and its characters that always seems to hit you right in the feels, particularly when it comes to the romantic relationships that have transpired over the course of these past 15 seasons. Some managed to withstand the test of time, but there are also a handful of Grey's Anatomy couple breakups that hit so hard we may never fully recover, regardless of how much time has gone by.

Sure, diehard fans are well aware that these breakups involve fictional characters in equally fictional relationships, but this series does such a good job of making you invested in these stories it's impossible not to get emotional if a couple ends up parting ways. Not every romance makes an everlasting impression, but now and again one comes along that will forever have a place in our hearts, even if the duo are no longer together. So if you're in need of a good cry or are just feeling nostalgic about the Seattle Grace couples of yesteryear, let's take a look back on some of the show's biggest breakups that have us reeling to this day.

Controversy may have surrounded Isaiah Washington's departure, but on-screen his character, Dr. Burke, seemed to be the perfect match for Cristina Yang. They both had a passion for surgery that matched the passion they had for each other. That is, until he left Cristina at the altar and made us believe that love was dead. That scene of Meredith cutting Cristina out of her wedding dress still haunts me to this day.

They may have hated each other at the beginning of the show, but as the series progressed their relationship grew into something real and genuine. They saw each other through some truly terrible times and it was that foundation of friendship that soon grew into an epic love, which made seeing it end so abruptly all the more devastating.

Not everyone may have been a fan of this duo, but their relationship had an intensity about it that was undeniably intoxicating (if not also somewhat unhealthy at times). But in the end they just didn't want the same things, so even though the break up was ultimately for the best, their split was still gut-wrenching — as was Sandra Oh's exit from the series.

As the show's first (and for a long time, only) same-sex couple, Callie and Arizona became an important part of not just Grey's Anatomy, but of television romances in general. They started out so happy together and that happiness proved to be infectious to anyone who witnessed it. They were a couple you wanted to root for, but after Arizona lost her leg, things ended up going from bad to worst for these two.

Their relationship was never able to fully recover and led to some pretty intense fights. They deserved a happy ending that what they were given, which is hopefully being rectified now that Arizona moved to New York so that Sofia could be close to both her moms.

Who knew that a hot hookup in a bathroom would lead to such an epic romance that would launch the 'ship known as Japril? These two felt like endgame for so long it felt like a major loss when they parted ways. Thankfully, they've managed to maintain their friendship throughout it all, but it just can't compare to their glory days as a couple.

Granted, this breakup didn't end up lasting and the two of them went on to have an epic love story for the ages, but who could ever forget Meredith's epic "pick me, choose me, love me" speech to Derek, who ultimately decided to choose Addison (at least for the time being). Meredith made herself completely vulnerable and ended up having her heart broken. Sorry, McDreamy, but that was McMonstrous.

It's debatable whether these two should be on the list, given that they're still married and love each other very much. In fact, Bailey insists on calling it a sabbatical, but technically it's still a breakup and one that hopefully is only temporary.

Real life breakups are hard, but let's just all agree that Shonda Rhimes knows how to make even the fictional ones feel pretty authentic. Here's hoping she goes a bit easier on us in the future — for everyone's sake.