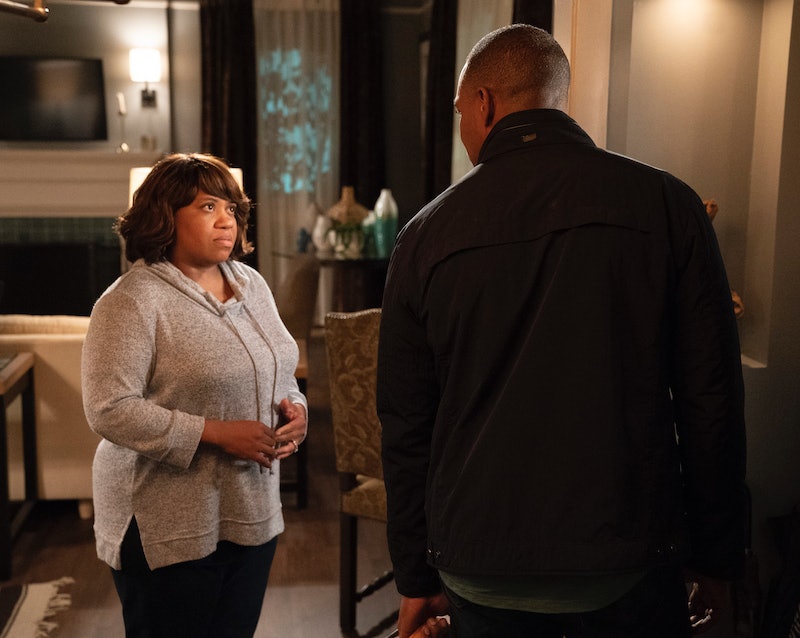 Like many fictional couples who got their start on Grey's Anatomy, Miranda Bailey and Ben Warren have faced a fair amount of obstacles throughout their relationship. However, their fight during last Thursday night's episode of Station 19 made it clear that their marriage could be in real jeopardy. So will Bailey and Ben get a divorce on Grey's Anatomy? This usually solid couple is gearing up to face their biggest hurdle yet.

The fight that took place was something that's been on the horizon for quite some time now. For weeks, Bailey has made mention on Grey's how much stress and anxiety she's been feeling lately. It's why she opted to cut back on her surgeries and temporarily step down as Chief of Surgery at Grey Sloan Memorial. And yet, even after taking all of those precautions, she still felt anxious and worried all the time. That's when she began to realize that it wasn't her workload she was so stressed about — it was her husband's high risk job as a firefighter.

Ben lays his life on the line for people every day by going into burning buildings and placing himself in dangerous scenarios. That's because he's a good man who wants to save lives, but in doing so, it's unintentionally caused a major upset in his wife's life. If he doesn't text her back after a certain point throughout the day, she worries that something's happened to him and it's eating her away to the point where she needed to make her feelings known.

This decision to confront Ben came even more urgent after Bailey discovered a document from her insurance company that had a set benefit policy in place for her in case Ben died while out on the job. Add that onto his failure to respond to her text messages and it all boiled over, bringing Bailey to an unexpected conclusion.

"I love you so much Benjamin Warren, so much... I feel like the two of us are so strong. We've gone through so much together and I know we can get through this too," Bailey explained. "I need a sabbatical, I need to lower my stress... I can't spend every day wondering you're OK... I feel like maybe I can put myself together if we take... a break from our marriage."

And while Bailey made it clear that this in no way meant that their marriage or relationship is over in any way, Ben told her that he believed that, if they do this, it's "the first step on the road to divorce," which is not what either of them wants. But Bailey was firm in her sabbatical idea, knowing that she needs to take some time away for herself in order to feel better. Because if she's not expecting him to come home, she won't be worried about him coming home.

"I can't breathe," she told him during a heartbreaking speech. "My heart raises and I don't feel like myself. I'm afraid being married to you when you put your life on the line every single day, I'm scared it could kill me... I love you but worrying about you, you are literally breaking my heart."

And with that, Ben grabs some of his things and left (for the time being), but not before giving her a big kiss goodbye. So will this decision prove Ben right and eventually result in divorce? It's hard to tell. Since he told her that he wanted to become a firefighter, it's been a point of contention. Jason George, who plays Ben, told Bustle just before the Station 19 premiere that Ben and Bailey will have their troubles, but ultimately find their way together. Let's hope so.

The fact that Bailey was so honest with Ben about how she was feeling proves that they stand a good chance of making it through this. Openness and honesty are the cornerstones of any solid marriage and because they both listened to each other and truly want to make it work, then they just may be able to overcome this hurdle after all. If any duo can make it, it's these two.

More like this
Meet The New Team Of Residents Joining 'Grey's Anatomy' In Season 19
By Brad Witter and Sophia Moore
Netflix Reveals First Look At Wednesday In The 'Addams Family' Spinoff Series
By Bustle Editors
Who Plays Trent In 'Never Have I Ever'? Benjamin Norris Calls His Character A “Himbo Stoner”
By Grace Wehniainen and Radhika Menon
Who Is Tatiana Maslany Dating? The 'She-Hulk' Star Is Married To 'A Locke & Key' Actor
By Radhika Menon
Get Even More From Bustle — Sign Up For The Newsletter