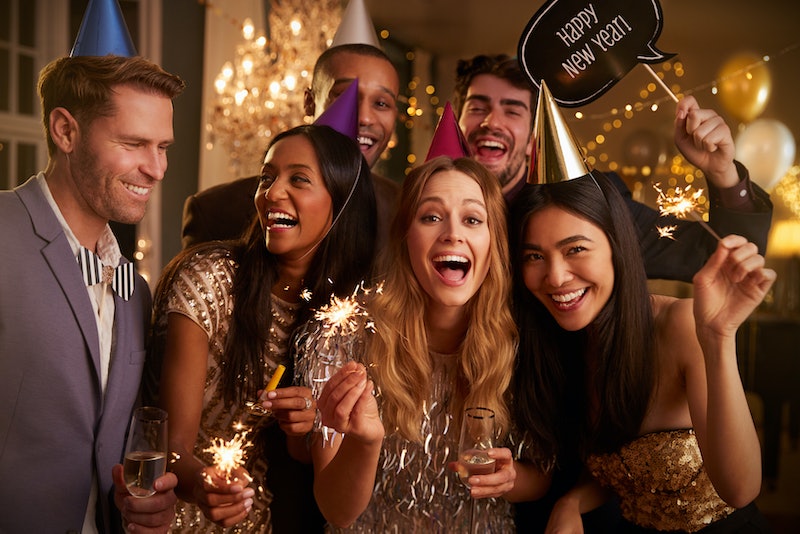 New Year's Eve is one holiday where expectations and reality never match up, and going out can be both expensive and disappointing. The best way to make sure you have an epic New Year's Eve is to throw your own party, and these seven New Year's Eve 2017 party ideas can give you some inspiration. While it hitting the town on NYE sounds fun in theory, venturing out on this night usually results in trying to find fun versus actually having fun. Seriously, this is the one night of the year when your FOMO will totally betray you. There's no need to battle crows and surging Uber prices when you can throw your own unique bash.

Turn your pad into the place to be this New Year's Eve by choosing a theme, inviting your nearest and dearest, creating an amazing playlist, and stocking up on the champagne because literally everyone will want to toast the end of 2017. And, by having your own NYE party you can be certain that you won't have to wait in line to get in — not to mention pay a hefty cover charge — only to wait in an even longer line at the bar. Or the bathroom.

The best part part about hosting your own party is that you're in charge. You get to control the music, decide on the guest list, the music, and the food. Sounds like a dream, right? Check out these NYE 2017 party ideas to send 2017 off the right way — surrounded by your friends in your own home.

If you need inspiration for your '80s-themed New Year's Eve party, look no further than the '80s-inspired NYE film 200 Cigarettes, which Vogue called the best New Year's Eve movie ever made." If you haven't seen it, 200 Cigarettes is set in New York City in the 1980s, and it follows an ensemble cast that includes Gaby Hoffman, Courtney Love, Kate Hudson, Paul Rudd, Dave Chappelle, and more, as they try to find the fun on New Year's Eve.

Have your guests come decked out in '80s party dresses, which can always be found at Goodwill, get a polaroid camera, create an all-'80s playlist, pour some liquor in the punch bowl, and have a throwback evening of fun in an era where no one ever dreamed that Donald Trump would be president. Check out Pinterest for '80s-inspired party decorations and games so you can make sure everyone has a totally radical evening.

If you haven't finished season two of Stranger Things, stop reading right now because this is a major spoiler. If you have, then you know that the Snow Ball Dance in the finale is one of the best TV moments of all time. If you and your friends are obsessed with Eleven and the rest of the Hawkins' gang, turn your home into a winter wonderland by hosting a New Year's Eve Snow Ball Dance.

Cities around the country and in Canada are hosting their own Snow Ball Dance events, but you can have one in your living room. Queue up your Stranger Things playlist, get some snow ball decoration ideas from Pinterest, create a photo booth where everyone can take Instagram-worthy snow ball snaps, and dance two feel apart from each other like you're back in eighth grade.

3. Have A Find Your Fortune Party

Throw a party where your guests can find out what's in store for them in the new year. I did this one New Year's Eve, and it was super fun. Start by getting some Magic 8 Balls and placing them on tables in each room. Next, print out the 2018 horoscopes for each sign of the zodiac sign and put them in a binder so guests can flip through to see what they can expect in 2018. Finally, throw back to your childhood days of fortune telling by making some old fashioned cootie catchers as party favors. You can even download this cootie catcher template from Darcy Miller.

If you and your friends are super competitive, and love a good game night as much as Will and Grace do, turn your game night into a New Year's Eve party with these NYE-specific games. Things like "Two Truths and a Lie," NYE-themed charades, NYE "Never Have I Ever," and more can keep the low-key fun rolling all night long.

If you want to go fancy, but still don't want to venture out, you can definitely host a black and white ball, in the spirit of Truman Capote, from your own home. Capote, author of In Cold Blood, is credited with throwing the best black and white ball in history back in 1966. Make it super swanky by directing everyone to dress in black-tie attire, clear space for a dance floor, keep the champagne and music flowing, and serve themed tapas. If you need more inspiration, The Spruce has a black and white ball etiquette guide to get you started.

6. Have A NYE Backward Brunch

Who says you have to have bunch at noon? Flip the script for New Year's Eve 2017 by having your brunch at midnight, which is just about the time everyone is going to want a snack. Make some of these brunch recipes ahead of time so you can just heat them up as midnight nears. Things like quiches and casseroles are super easy, and they will definitely fill everyone up. At midnight have a mimosa toast and open your NYE brunch buffet.

7. Host Your Own NYE Dinner Party

Getting a dinner reservation on New Year's Eve can be a total nightmare. And, if you're lucky enough to get into a restaurant, there is likely a super-pricey pre-fix menu that doesn't have anything you want to eat. If you want to capture the intimate ambiance of a night out with close friends, throw your own NYE dinner party. You can make it a potluck, or plan your own menu, and recipes that can be made in the crockpot can take the guess work out of cooking for a large group.

You can even create a seating chart and put name cards at each place setting. Instruct your guests to bring a bottle of wine or a dessert, and your NYE dinner party will be much more enjoyable than forking over half of your paycheck at a restaurant on New Year's Eve. While going out for New Year's Even might seem like a good idea in theory, home is really where the fun is at.

More like this
What Is The Forest Personality Test? The TikTok Trend, Explained
By Georgina Lawton
You've Probably Been Saying Ibiza Wrong
By Sam Ramsden
7 Birthday Instagram Story Ideas Your Friends Will Love
By Emma Carey
The Top Mistakes Scorpios Make In Relationships (& How To Avoid Them)
By Nina Kahn
Get Even More From Bustle — Sign Up For The Newsletter