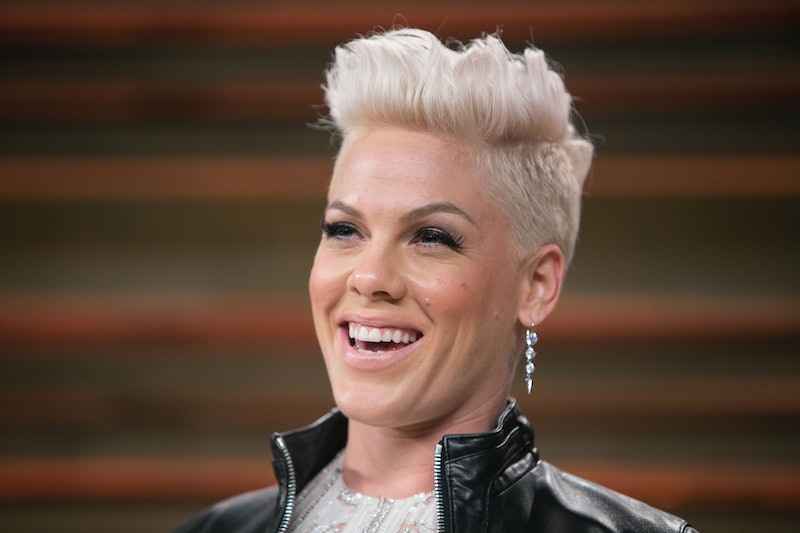 Pink, aka P!nk, aka Alecia Moore, has never been afraid to speak her mind. It's what made her stand out in the sea of female pop stars that reached super-stardom in the early 2000s, and continues to set her apart today. Pink's rebellious streak also made her a feminist hero long before it was fashionable, and these seven Pink moments that you didn't realize were super feminist prove that she's going to continue being outspoken even if it's no longer "in."

Pink, who is gearing up for the release of her seventh solo album, Beautiful Trauma, is about to hit another major career milestone: receiving the Vanguard Award at the 2017 MTV Video Music Awards (VMAs). As an artist, she has delivered hit after hit, managed to grow beyond the pop genre, and proved that one can still deliver flawless vocals while hanging upside down from the ceiling. And, while all of these achievements certainly qualify her to receive the Vanguard Award, it's hard not to admit that part of the reason she has been such an influential artist is because of her feminism. From her songs like "F*ckin' Perfect" or "U + Ur Hand," to her political activism, and her refusal to give into body shammers, Pink's downright refusal to live her life by patriarchal rules is what really makes her such a standout.

1. When She Released "Stupid Girls"

Pink really embraced feminism and political activism in 2006, with the release of her fourth album, I'm Not Dead. The album featured political songs, "Dear Mr. President," and included a particularly poignant song about the struggles of being a teenager in "Conversations with My 13 Year Old Self." But it was her smash single "Stupid Girls" that really declared Pink a feminist in pop music. In the song, she trashed society's obsession with scantily clad women, taking aim at everything from the women in rap videos to the message that women exist only to get men to like them.

The video however, which appeared to feature the singer making fun of Mary-Kate Olsen, did, sadly, go against Pink's feminist message. In the video, she parodied Paris Hilton, Jessica Simpson, Nicole Ritchie, and also exposed the ugly side of celebrity, specifically with a scene about bulimia. There's nothing wrong with exposing the pressures women face in the spotlight, but looking back, it's obvious that making fun at women who battled eating disorders (Olsen was treated for an eating disorder in 2004) seemed a bit more cruel than empathetic. Still, the song championed women with ambition and definitely inspired listeners at home that they didn't need to be like the blonde, skinny girls popping up everywhere in the media.

It's worth noting that, at the time of the single's release, Pink also publicly declared herself a feminist, something pop stars like Taylor Swift and Katy Perry didn't dare do until almost a decade later.

2. When She Buried The Hatchet With Christina Aguilera

The remake of "Lady Marmalade" from Pink, Christina Aguilera, Lil' Kim, and Mya was a real showcase of female power, sexuality, and love, but there were also rumors of cattiness behind the scenes, and the song sparked a celebrity "feud" between Aguilera and Pink that fans still hold onto today. But, you know who doesn't hold onto their tiff in the early 2000s? Pink. The two even worked together on a season of The Voice, an experience Pink called "really refreshing," telling Entertainment Tonight, "Her and I have had history and it hasn't always been wonderful. I think it just took us 15 years and I feel like there was true love and it felt really good." Pink's refusal to get sucked back into a decades-old feud is a prime example of her feminism. She's not interested in tearing other women down, especially not women in her industry whom she respects.

3. When She Refused To Get In A Feud With Lady Gaga

After Lady Gaga performed some aerial tricks during her Super Bowl halftime show, Pink, who is known for her aerial shows, proactively spoke out to quash any rumors of a feud between the two singers. "Lady Gaga killed it yesterday," she wrote on Instagram. And this wasn't the first time Pink has refused to get into a famous feud. A few years ago, she removed herself from a potential war of words with Demi Lovato after the 2015 VMAs.

Moreover, the singer frequently uses her social media to support other women. In 2016, she gave a shout out to Claire Danes' beautiful Met Gala dress, reposting a photo on her Instagram with the caption, "This is the dress of my dreams #clairedanes." And just recently she celebrated women at the top of the iTunes charts on Twitter and declared her love of Miley Cyrus' new music.

Women supporting women is one of the most important, and enjoyable, aspects of feminism. It also happens to be the hardest one for the feud-obsessed tabloids to understand.

4. When She Supported Black Lives Matter

Yes, Black Lives Matter is a feminist issue. And no, Pink won't stop saying it.

5. When She Shut Down Body Shammers

After an event in 2015, the media began scrutinizing Pink's weight (she wasn't on tour at the time, was not performing acrobatics every night, and thus had gained a little weight), and she shut them down like a pro. "I am perfectly fine, perfectly happy, and my healthy, voluptuous and crazy strong body is having some much deserved time off." She went even further, declaring her curvier body was a result of being happy.

"There are so many different kind of bodies," Pink said during an appearance on Good Morning America in 2016. "How can you shame one over the other? My think is, if you have all four limbs and all five senses, you're doing A-OK and anybody that has an issue with that needs to find some gratitude."

6. When She Embraced Breastfeeding

Since welcoming her second child, son Jameson, in early 2017, Pink has been very open about her experience as a working mom, and that includes sharing photos of breastfeeding while getting made-up for an event. She's also shared photos of her pumping behind the scenes. Who said showbiz isn't glamorous?

7. When She Refused To Label Herself

After a report from News of the World quoted Pink as identifying herself as "bisexual," the singer hit back, saying that the interview was completely fake. However, she never denied that she's had romantic relationships or trysts with women. "Honestly, I've never defined myself," Pink said in an interview with The Advocate a few years later. "I've never felt the need to. I still don't." Pink's refusal to be put in any boxes by the media is a refreshing reminder that you shouldn't let others define your sexuality, and hopefully that will give women the freedom to explore it on their own.

There are many more examples of Pink's feminism, both in her work, social media, and personal life, but probably the most feminist thing Pink has done is inspire women and men all over the world to embrace who they are and, more importantly, to embrace each other.