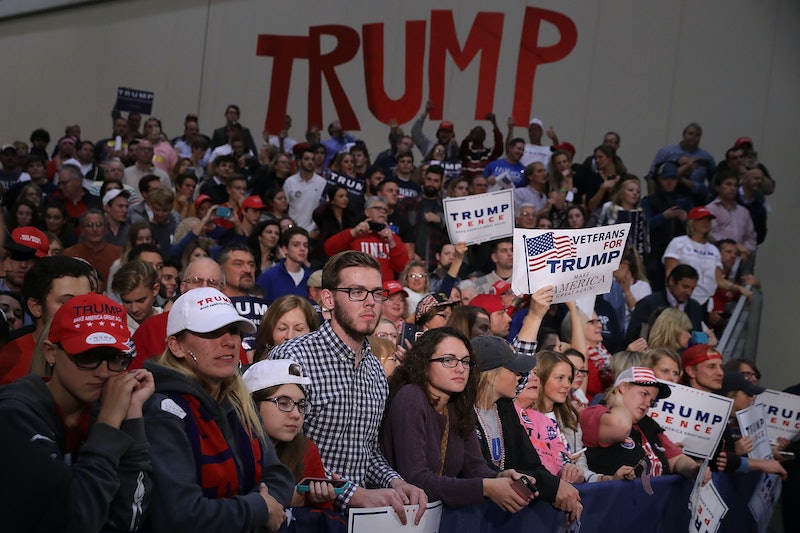 After the tumultuous 2016 election, this country feels particularly divided. Political conversations — at least with people who don't share your ideology — can sometimes be hard to entertain without running the real risk of getting in a fight. However, I think it's an important time for people on opposite sides of the political spectrum to talk to each other. Here are seven questions I have for the conservative voters in my life.

The internet has made it easy to settle into silos, and not just because it lets us consume whatever news matches our political bent. But take Facebook or Twitter, for example. Those can turn into platforms for vitriolic attacks over politics, often letting people behind an egg avatar or a blurry profile pic go on tirades that aren't productive and sometimes hurtful (and worse, they sometimes turn into threats). That, in my opinion, has sometimes creeped over into real life, making civil conversation on what's going on in the White House a rarity.

Engaging in political discourse that you know will be thorny isn't fun. But for me, personally, I think it's time I start engaging the conservatives I know and getting them to weigh in on some genuine questions that I've had since President Donald Trump assumed office. Because in my mind, it's the only way to really understand what's going on with a good chunk of the U.S. population. And yes, I promise these questions are at least a little more insightful than "BUT WHY?!"

1. How Do You Think Donald Trump Is Doing In Office So Far?

From my perspective, Trump's first month in the White House looks like a dumpster fire. But I'd love to understand what, specifically, conservative voters think about he's done so far. What do they think has been successful? What executive orders or presidential actions did they like? Do they think he's acting more presidential, as he promised he would do one million times on the campaign trail?

2. What Is Attractive To You About Being A Conservative?

I think this would be a particularly good conversation starter with young conservatives. Does their conservative identity apply to their foreign policy plans? Their preferred economic proposal? Their social views, such as towards abortion and LGBTQ rights? These are issues I would love to hear more about from them.

3. Would You Ever Vote For A Democrat?

Conservatism isn't a party. It is not a direct synonym for Republicans. But as a 2016 study notes, there is vast political gulf right now, and millennials are much more sharply divided politically than past generations. A research paper published in the Personality and Social Psychology Bulletin in September 2016 found that millennials are much more likely than Gen Xers or Baby Boomers to hold "extreme" political views, but noted that more millennials were likely to say that they were conservative than those past two generations when they were the same age. So could a person who identified as a conservative ever vote for a Democrat? Or does their ideology restrict them to Republican candidates?

4. What Could You See Liberals And Conservatives Compromising On?

I mean, there has to be something, right?

5. What Is Your Biggest Critique Of Liberals?

It's important to understand that these conversations should be an exchange of ideas. You should ask questions that will give you insight into how other people think, and you shouldn't walk away from the conversation without an understanding of why they don't agree with you. Sometimes it's easiest to ask that directly. And asking a conservative what their biggest pet peeve about their political foes could be a good way to start that conversation.

6. What Would Be The Main Political Agenda Of Your Ideal Conservative Politician?

We all have to make concessions for candidates — none perfectly align with what we want personally. So understanding what is at the very top of a conservative's wish list in a politician would be informative.

7. What Does Being A Conservative Mean To You?

At a time when we're so quick to throw wide-ranging labels on each other, it's good to step back and ask someone how they define the label that they choose for themselves.

Any of these questions could be uncomfortable for one or both parties, but if we want our country to move forward and find some common ground, they're important ones to ask. I know that I will be trying to listen and understand other points of view before diving into another Twitter fight.