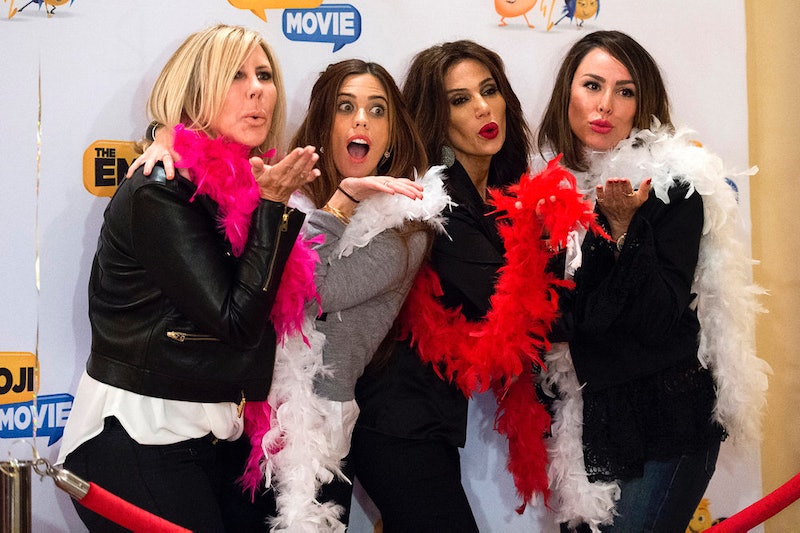 It's been 12 years since the Real Housewives of Orange County first premiered. New Housewives have come and gone, and after seeing the Season 12 cast, viewers are ready for a major overhaul. Fans have made it quite clear which RHOC cast members need to leave the series immediately — or hopefully after the current season comes to a close.

Of course, nobody likes everyone, especially when it comes to Real Housewives. Yes, there are going to be fans who root for certain Housewives compared to others, but, if you scroll through Twitter, it's clear that much of the RHOC audience wants an entirely new cast. Yes, I know this is all of the Season 12 Housewives, but they obviously aren't giving fans what they want.

It probably wouldn't be the worst thing to at least cast several new faces, or better yet, bring back some old Housewives. That might just be what the series needs to revive it. Can you imagine a season with Heather DuBrow, Alexis Bellino, Gretchen Rossi, Jeana Keough, and Lynne Curtain? Now that would pump life into RHOC. That cast also wouldn't be something fans would expect.

Whatever the case, Bravo may seriously want to consider listening to the show's fans, because if cast changes don't happen sooner rather than later, RHOC could very well find itself without any audience at all.

With that, here are the RHOC cast members fans are hoping will twirl their way out of the series.

Vicki Gunvalson, it might be time for you to make your exit as "The OG of the OC." At this point in Season 12, Shannon Beador and Tamra Judge don't even want anything to do with her, nor will Vicki speak to them. In one episode, she even said, "I want to punish them for not being my friend." When you have someone saying things like this on a show based on women interacting with each other, isn't it time for her to depart? Vicki has become an issue fans refuse to ignore. So much so, as one Twitter user shared, "Vicki needs to leave. New life would be breathed into #RHOC if she were let go. She's run her course." Hmm... maybe the solution is to have Vicki's daughter, Briana Culberson, replace her mom as a full-time Housewife?

As mentioned above, the never-ending drama between Tamra, Vicki, and Shannon is really annoying fans. For some, the only way to make it better is by having them leave. "I don't think I can handle one more episode of Tamra/Shannon and Vicki not interacting at all," a fan tweeted. "Make it work ladies, or leave the show." Another RHOC viewer wrote, "Shannon and Tamra seriously need to leave #RHOC I'm over the giant split in the cast it's so annoying." Furthermore, Shannon's weight storyline and her relationship with David Beador is too much for some fans.

Again, fans want Tamra and Shannon to figure out a way to at least be civil with Vicki or they're no longer tuning in. One would think viewers would love all of the drama between these three, but it's obviously gotten to a point where it's just old. "I am SO sick of Tamra & Shannon standing around talking about how they are done & over Vicki. Then leave the show #RHOC," someone tweeted. Another Twitter user is sick of Tamra's so-called games, "Tamra has tried to turn every cast member against Vicki then says the women should mind their own business??? WTF? I'm so done! #RHOC."

She may be more entertaining than Lydia McLaughlin and Peggy Sulahian, but Kelly Dodd is far from a fan favorite. "Legit can't stand Kelly Dodd, please do us a favor and leave the show," one of many tweets about her read. "Your [sic] ugly personality isn't worth the entertainment #RHOC #byefelicia." And here is another passionate viewer expressing their distaste for Kelly: "There's never been a more disgusting train wreck in the worst possible sense than Kelly and I'll never understand why she's on. #RHOC." She's definitely a controversial cast member, that's for sure.

Apparently, ever since she became a mother, RHOC watchers find Meghan King Edmonds nothing but boring. "Just when you thought Meghan couldn't get any more boring---she goes from baby blah to modeling?? #RHOC #YAWN." And another: "Meghan you still boring baby did not save your storyline good day #RHOC." One more: "Meghan is so boring why is she still on the show." Yeah, Aspen's cuteness isn't turning viewers into Meghan fans.

One of the biggest mysteries of RHOC Season 12 is why Peggy joined as a Housewife. According to those on Twitter, she doesn't add anything to the reality show, is able to put anyone to sleep with her scenes, and needs to mind her own business when it comes to the Tamra/Shannon/Vicki drama. Here is one tweet that pretty much sums up how most fans feel about her: "Is just me or does Peggy combine all the traits of every miscast housewife in one boring & annoying package? No? Just me? Ok."

"Why the heck did RHOC bring back Lydia?" That's what most anyone watching this season is thinking. "OC used to be my fave, so boring now," one fan tweeted. "Lydia makes me want to jab knives in my ears. Girl, bye." Like Peggy, there are those who find Lydia nothing but boring. Some people didn't even want to watch her vacation in Hawaii: "I literally just fast forwarded through all of Lydia's Hawaii scenes on #RHOC tonight. @Andy please tell me this season gets better?! #snooze." Maybe the show should've brought back a different former Housewife?

Basically, the entire series needs to be revamped. The fact that most viewers agree about the above speaks volumes, so RHOC really needs to switch things up for Season 13.