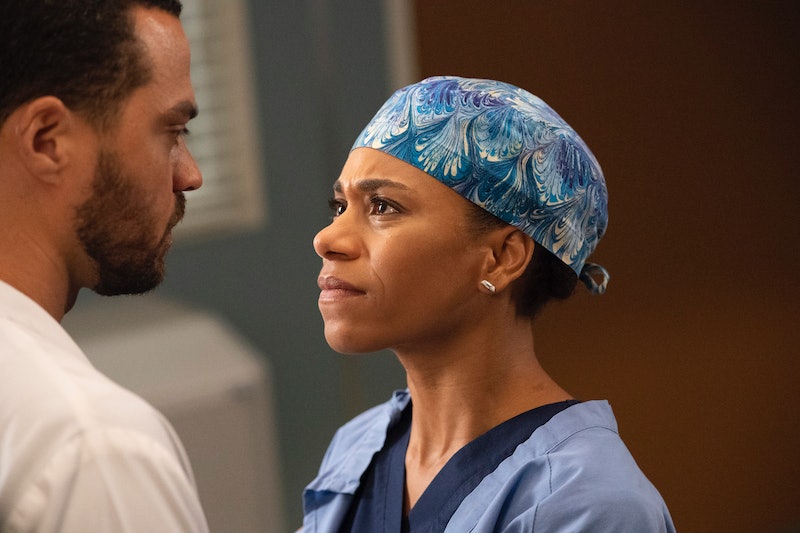 Like any show would after a decade and a half on the air, ABC's medical soap has a long history of relationships. Various permutations of romance have played out through the show's ever-rotating cast of characters... not all of them popular. One of the most recently frustrating couples has been Jaggie. Can we all just be honest with each other and admit that Maggie needs to dump Jackson on Grey's Anatomy as soon as she can. The duo currently holds the title of Worst Couple™ and it's not even a close contest. They are terrible.

While Grey's is widely known for its fan-favorite pairings — MerDer, Calzona, Japril, Mark and Lexie, Izzie and Denny — the series has also had its fair share of duds over the past 15 years. Remember Gizzie? (I still shudder at the sound of that unfortunate nickname.) Or Callie and Penny? Or Arizona and Minnick? Or even Izzie and Ghost Denny? I cringe thinking about them all. I'm afraid that by the time it's all said and done, the pairing of Maggie Pierce and Jackson Avery may go down in Grey's history alongside those other duds. (If it's not there already.)

Grumblings over the forced romance are only likely to increase after the Nov. 8 episode, "Anybody Have A Map?" which apparently features a scene in which Jackson tells Maggie about a woman he met while on his quest of self-discovery. But that's just one reason this couple is honestly trash and needs to call it quits ASAP.

This isn't Game Of Thrones, things like this should not be allowed in the halls of Grey Sloan Memorial Hospital. I know it's not technically incest because they're not blood related... but honestly if you're having to be technical about incest, then you've already gone too far. Maggie's dad and Jackson's mom are married, making the lovers step-siblings, which is just... no. No, thank you.

2. They Have Zero Chemistry

What I want from my Grey's Anatomy relationships is passion, people. Steamy on-call room hookups, smoldering glances in the hallways, charged eye contact in the elevator. Not whatever wet towel "Jaggie" throws on any scene they share together. Really, this is a subset of reason #1 they shouldn't be together: technically they're siblings, and they certainly act more like siblings than romantic partners.

If their family situation and general lack of chemistry wasn't enough, Season 15 has given very specific reasons why this couple isn't working out. The season had barely begun when Jackson took a sudden leave of absence, disappearing on Maggie and leaving the state with nothing more than a voicemail to explain his absence. I don't begrudge him his spiritual journey after a near-death experience, but that's not something you do to someone right after having said "I love you" for the first time. Also, what kind of monster leaves a voicemail anyway?

4. Jackson Met Someone Else

As if ghosting his girlfriend wasn't enough, this sneak peek that ABC released of the season's seventh episode reveals that Jackson also met a mystery woman during his travels. Sure, there's bound to be some "innocent explanation," but even if Jackson didn't have an actual, physical affair, it's clear that there's an emotional connection there. And emotional affairs can be just as hurtful as physical ones.

Sometimes it feels like the only reason Maggie and Jackson are even together is because the writers couldn't figure out anyone else in the cast to pair them with. But the thing is, they shouldn't be in a relationship just for the sake of being in a relationship; there's nothing wrong with being single, and Maggie certainly doesn't need a man to make her whole. She's the hospital's youngest-ever cardiothoracic surgeon, she's got a wonderfully supportive sisterhood in Meredith and Amelia. Just let her be focused on her family and friends and career, rather than a man she has no chemistry with!

Sorry not sorry, I'm just not OK with seeing Jackson end up with anyone other than April. I'm still not over Dr. Kepner's departure from the show, since it prematurely put the kibosh on Japril's inevitable reunion. Even the actors themselves were surprised that the fan-favorite couple never got back together. "I thought Jackson and April were meant to get back together and they were going to get married again and realize they'd been crazy and it was just going to be this long, slow burn," April's portrayer Sarah Drew said to The Hollywood Reporter in the wake of her departure.

Honestly, this is both the first and the last reason they shouldn't be together. It's really that simple.

Come on, Maggie, you're a smart woman. Get rid of this deadweight already.

More like this
Ellen Pompeo Is Stepping Back From 'Grey Anatomy' For More Than Half Of Season 19
By Brad Witter and Sophia Moore
Jane Lynch Revealed Why She’s Leaving 'Funny Girl' After Lea Michele Was Cast
By Grace Wehniainen
On 'Industry,' Marisa Abela Takes Control
By Morgan Leigh Davies
'A League Of Their Own' Star Abbi Jacobson Is Engaged To Jodi Balfour
By Jake Viswanath
Get Even More From Bustle — Sign Up For The Newsletter