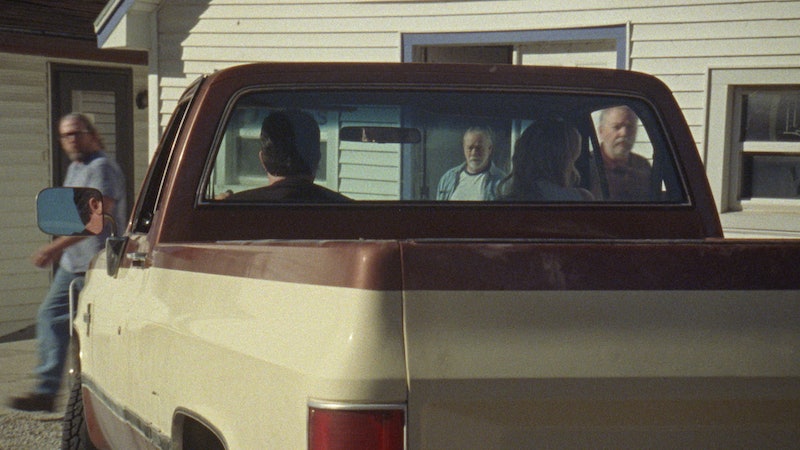 In the age of the crime podcast, murder conspiracy theories have become somewhat of a cultural nexus for us. Avi Belkin's six-part docuseries No One Saw A Thing is likely to be the next big obsession, as it focuses on an almost 40 year old mystery: who shot the Skidmore town bully Ken Rex McElroy? Though everyone seems to agree why the crime was covered up, Ken Rex McElroy Reddit theories abound as to what led to that fateful day.

On July 10, 1981, McElroy was shot dozens of times while in his truck, in front of a crowded bar in Skidmore, Missouri. It was broad daylight, and McElroy's wife was with him. According to The New York Times, as many as 60 people were at the scene, and bullet casings from two different guns were found. Yet to this day, not a single witness has revealed who actually shot McElroy.

This is likely because, according to all of Skidmore's residents, McElroy terrorized the town. McElroy had a laundry list of alleged crimes: he shot an elderly grocer in the neck, stole livestock, harassed women, raped a 14-year-old, destroyed property, and routinely threatened and stalked the townspeople. He was charged with numerous felonies over the years, but was never convicted, allegedly because his lawyer had ties to the mafia, and witnesses were too afraid to testify.

Reddit theories all seem to agree for once (surprisingly), that McElroy's death was inevitable, a case of vigilante justice as a result of the criminal justice system failing. There are some theories about the smaller details of the case, though.

McElroy Had A Head Injury

It's difficult to explain McElroy's horrific actions leading up to his murder, but some have theories that McElroy's aberrant behavior was a result of chronic pain and a head injury. Buzzfeed: Unsolved reports that McElroy was seriously injured at 18-years-old after a steel slab fell on him, leading to him having chronic aches that made him irritable. Morbidology cites a 1981 article that claims McElroy fell from a hay wagon as a child, and the resulting steel plate that was implanted in his head could be the reason for his violent behavior.

Or A History of Family Aggression

Trauma and aggression can be generational, which is what some Reddit users say is the case with the McElroys. User LonelyInterlude said their mother served McElroy's brother at a diner, and he was angry and violent: "He screamed that [the eggs] were cold, stabbed his fork into them, and stormed out." Another user who lived nearby hinted that the whole family was "odd."

A common Reddit theory is that drug misuse played a role, both for McElroy and the townspeople, as a common side effect of meth is increased aggression and violence. Reddit user CountEveryMoment points out that Missouri has a huge meth problem, which is true. (The state ranks number one in meth production.)

Aside from meth, other theorists think the water needed to be investigated for causing possible lead poisoning in the townspeople. "There's been a causal link between high lead content and increased violent crime as an example," said Reddit user justdokeit, on why crimes tend to happen in Skidmore. Lead is known to cause irritability and health problems in adults, and can have negative neurological affects on children.

One Redditor claims that the identities of the two shooters are actually known by the townspeople (as opposed to them genuinely not seeing who shot first). "The identity of McElroy's primary shooter is relatively well known. He has been dead for, AFAICR, ten years or so. [B], suspected of being the secondary shooter, still lives in the area," said BurtGummer1911, who assumedly lives near or in Skidmore.

Despite finding evidence of bullet casings from just two guns, there are other theories that several men pulled the trigger. As one Reddit user said, "I grew up 20 minutes from Skidmore in a tiny town. I wasn't born yet, but it is some what assumed/known it was three men."

The one thing that armchair detectives agree on is that, regardless of who specifically pulled the trigger, it was the town itself that killed McElroy. "The entire town shot him. They grouped together, they're hiding it together. They likely won't do it again," said one Reddit user.

Another user said that there were rumors that using multiple shooters was on purpose. "That was a rumor that went around. My grandparents actually knew someone from Skidmore, and he suggested that they were given information that if multiple people shot him it would be nearly impossible to say who the actual killer was, and they all kept their mouths shut out."

More like this
Shonda Rhimes' Net Worth Makes Her One Of The Wealthiest People In TV History
By Hugh McIntyre
The Best 'Grey's Anatomy' Intern Moments, From MAGIC to Glasses
By Grace Wehniainen
Kidnapping Victim Jan Broberg Is Prepared For A Friend Of The Family Criticism
By Brad Witter
'The White Lotus' Season 2 Trailer Teases Multiple Affairs & Another Dead Body
By Bustle Editors
Get Even More From Bustle — Sign Up For The Newsletter