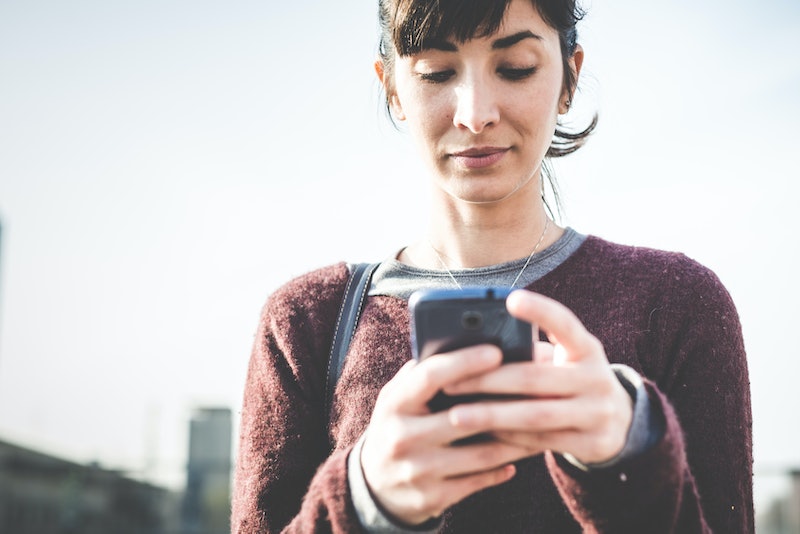 Whether dating apps are causing a "dating apocalypse" or are merely the easiest way to get a date, there's no denying these tools have been total gamechangers in the dating scene within the last few years. And even though dating apps are most popular among millennials, according to a recent Bustle survey with dating app Happn of over 1,000 dating app users, 78 percent of women and 85 percent of men still want to meet people IRL. That's why for the second year in a row, Bustle is deeming April, "App-less April" and encouraging our staff and readers to delete their dating apps for 30 days and meet people the old-fashioned way: offline. With participants tracking their progress and tricks and tips from dating experts, we'll be helping you feel empowered to meet people IRL all month long.

I won't pretend I'm not a huge proponent of using dating apps to find love: until very recently, I was perpetually single and definitely relied on apps like Tinder and OkCupid to meet potential partners. I've spent years swiping, and I'd be lying if I said there weren't times when all those almost-but-not-quite relationships (or flat-out rejections) took an emotional toll on me. In the moment, it's easy to ignore those negative feelings and think the solution is to just keep swiping until you feel better again. Realistically, though, we could all use a break from dating apps from time to time.

"Online dating gets perceived as competition with the person above, below, left, or right of you," Clarissa Silva, behavioral scientist and author of relationship blog You're Just A Dumbass, tells Bustle. "You’re looking for a specific set of qualities that complement you. So is everyone else. At the end, you expect that you will get what you want and so will they. When we receive multiple messages from multiple users, it enhances our self-esteem. However, if the messages are from people you wouldn’t normally want to connect with, it impacts your self-esteem negatively."

According to a survey of almost 10,000 millennial college students conducted by LendEDU — an online marketplace for student loan refinancing — 44 percent of those who've used Tinder said they use it as a means of "confidence-boosting procrastination." But even though getting an ego boost might be our intention, that doesn't mean dating apps' impact on our sense of self-worth is always positive. A 2016 study conducted by the University of North Texas found that male Tinder users reported having lower self-esteem, and both male and female users reported having less satisfaction with their bodies and looks. Even though swiping apps like Tinder might seem like harmless fun, it's clear that we're actually super affected by our relative "success" or "failure" on dating apps.

Even though it can be hard to hear, sometimes the tough love we get from friends and family acts as a mirror that we need to honestly look into. "Sometimes family/friends are on target because they are listening to you express dissatisfaction with your choices," Silva says. "What you tell them is what they base their opinion on. They are the first people to notice change in your mood, attitude, or personality. They are mentioning things based on seeing this change."

There's a difference between healthy compromise between two partners, and preemptively altering what you're looking for simply because you're desperate to (finally) make a connection. "I’m talking about defining what you want based on someone else to be more appealing online," Silva says. "Your desires, lifestyle requirements, and dreams are the things that you thought of as the right things to create the lifestyle you wanted as a result of two people. Not just theirs."

We all get some amount of validation from social media activity, especially if that attention is coming from someone you’re talking to on Tinder. But if you're looking for a real relationship, these 'micro-validations' are a poor substitute that distract you from the real thing. "[When] liking a photo on Instagram or Facebook is [a] signal that the game is back on... it’s probably the saddest and minimal amount of effort to demonstrate interest in someone," Silva says.

The solution? Don't get caught up over-analyzing little things like who liked your photos; instead, focus your energy on people who give you real validation by being supportive and attentive in-person.

Because of how fast-paced dating apps are, it's easy to get super invested in someone, even if you only matched with them six hours prior. Thanks to this accelerated version of dating, rejection seems even more devastating — which naturally takes a toll on us. "Getting rejected through swipes does take a toll on our self-worth," Silva says. "Sometimes that impacts how we see ourselves. Do you think they chose someone that was prettier, sexier, etc. than you? If so, it’s time to remember that apps are games of probability. It’s not based on who would be ideal... it’s based on who says yes/no."

If you've been unsuccessful at finding a partner online, it's totally understandable to get frustrated and feel like giving up. But sometimes, instead of taking a step back and reevaluating what you want, it feels easier just to 'settle' with the next person who shows you attention because you're afraid to never find anything at all. "Fear of constant rejection and not getting what you want sometimes makes us settle," Silva says. "Most of us don’t like to admit that we are settling. But when we really look at what we wanted and what we’re getting, it might be that we are settling."

We all have coping mechanisms that make us feel better when things — like our love lives — feel out of our control. "This sounds like a no-brainer, but when you are coping with things you don’t want to deal with, like rejection or a blow to your self-esteem, you can turn to something to help you cope," Silva says. "You might not be aware that you are bingeing. If it’s excessive or other people are telling you you’re being excessive, it might be more than usual."

At the height of my dating app addiction in college, I felt like I was constantly on an emotional rollercoaster. "Sometimes questioning rejection can lead us to self-doubt," Silva says. "Delete the need to understand. Sometimes we really don’t know the reasons why things worked out the way they did. Sometimes people might not be completely honest with themselves and aren’t ready to be honest with you or can’t be honest with you. The best thing to do is just recognize that the person is not going to reach out or the person doesn’t want to be in your life — and that’s OK."

If you've begun to feel like you're burnt out by constantly swiping to make a connection, it's not too late to join Bustle's App-less April challenge and give your love life a low-tech makeover. Whether you want to focus on meeting people offline or do a complete dating detox, deleting your dating apps for a month is a great way to shake up your routine and get out of your dating comfort zone. Who knows — you might just discover that old-school dating is your style.