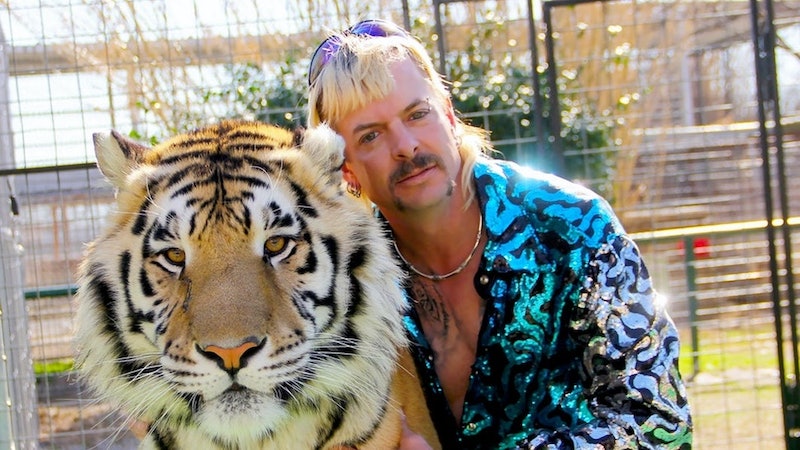 Calling all cool cats and kittens: Netflix’s bonus episode of Tiger King: Murder, Mayhem and Madness is finally here. Released on April 12, the Tiger King aftershow offered some surprising new revelations as host Joel McHale caught up with some of the docuseries’ subjects to discuss life after its acclaimed reception. In the 40-minute special filmed remotely due to the global novel coronavirus pandemic, McHale caught up with Jeff and Lauren Lowe, Kelci “Saff” Saffery, Joshua Dial, John Finlay, John Reinke, Erik Cowie, and Rick Kirkham to discuss all things Joe Exotic on the heels of the Tiger King star’s imprisonment for the murder-for-hire plot against Carole Baskin and several counts of animal abuse.

Directed by Eric Goode and Rebecca Chaiklin, Tiger King followed the rise and fall of Joe Exotic (real name Joseph Maldonado-Passage) during his time as zoo operator at Oklahoma’s Greater Wynnewood Exotic Animal Park. Between Exotic’s feud with Baskin and his inner circle of eccentric zoo employees, Tiger King became a binge-worthy phenomenon among viewers in quarantine. Now, with the after-show, the revelations just keep coming. Between claims that Joe killed healthy tigers (he alleged he only killed ones that were sick) and shot a horse to feed the big cats, below are seven of the most surprising things we learned in the after-show.

Since the release of the docuseries, Joe has been sentenced to 22 years in prison for his role in the murder-for-hire plot against Baskin and various other counts of animal abuse — such as the killing of tigers. While Joe has long maintained that he only killed sick tigers because “they were in pain,” Jeff and Lauren, current owners of the zoo, and Kirkham, producer of Joe Exotic TV, suggest otherwise.

“They were healthy tigers, by the way,” Lauren told McHale. “He said they were sick, [but] they were beautiful, healthy tigers that he called over to the fence,” Jeff added. “He shot ‘em in the head because he needed cage space.” In his own segment later in the after-show, Kirkham claimed he saw Joe kill healthy tigers, too — “one of them because the tiger nearly bit him one day,” Kirkham told McHale. “The guy was a cruel man.”

2. Jeff Lowe Says The "Bug" Was A Radio Antenna

At one point in the docuseries, Joe notices an antenna on the roof of the zoo’s gift shop and assumes that someone has bugged the place. In the after-show, however, Jeff and Lauren laughed off the ordeal as “bullsh*t” and said it was just a “two-way radio antenna.”

Saff, the zoo’s former animal keeper who lost his arm after he got mauled by a tiger, waded into the film adaptation discourse with an interesting actor choice. The former animal keeper said he wanted Brandon Baker, known for his role in the 1999 Disney Channel movie Johnny Tsunami, to play him. “I still go back to the kid who played Johnny Tsunami just because of looks,” he said. “I mean, he looks just like me.”

4. John Finlay Explains Why He Was Always Shirtless

Finlay, one of Joe’s former husbands, has a simple explanation for why he was always shirtless in the docuseries: to show off his plethora of tattoos. “I got tattoos. Why not show off?” he told McHale. “I mean, it was a little cold, but it was fun.” The excess of a shirtless Finlay became a source of interest among viewers. He also touched on it in a recent April 10 interview with Us Weekly and said producers had suggested he go topless. “There [were] a couple of interviews where I did have a shirt on,” he said. “They had actually filmed quite a few interviews where I did have a shirt on.”

Finlay also told McHale that he isn’t a fan of how the docuseries depicted him. “I was portrayed like a drugged out hillbilly, and that was not me at that time,” Finlay said. “I was four to five years clean.” He said that after the birth of his daughter, now 4, he had no desire to use drugs anymore.

5. Joe Exotic Allegedly Shot A Horse And Fed It To His Tigers

Kirkham told McHale that he saw Joe do things to animals that were “unbelievably cruel.” In his segment, he detailed an anecdote about a woman who had asked Joe to take her old horse in so that it could live a “good life” out in the pastures. Kirkham said that Joe happily obliged — only to shoot the horse and feed it to his tigers. “This old woman had a horse in a horse trailer,” Kirkham said. “She pulled in one day and she was really upset she was crying. Joe turned around and said, ‘Rick, go grab the camera and video tape all of this.’”

After the woman asked Joe to take care of the horse, Kirkham said, “Joe’s like, ‘Of course. I have plenty of land. Of course I will.’” Kirkham continued, “No sooner did the lady get off the park, Joe said, ‘Rick, follow me,’ pulled the western revolver out of his holster, shot the horse dead, and said, ‘I don’t take care of nobody’s animals and now they’re tiger meat.’” Kirkham said he then had the horse cut up and fed to the tigers.

In perhaps the most bizarre revelation, Kirkham told McHale Joe was actually terrified of big cats. “He was scared to death of lions and tigers,” Kirkham said. “In the shots you see in [the docuseries] where he's in with two tigers — the white one and the other one — the white one is blind and the other one is on tranquilizers.” He told McHale, "It's idiotic to think how he's become famous as the 'Tiger King' when he's so terrified of big cats."

7. ...And He Wants Billy Bob Thornton To Play Him In The Tiger King Movie

Because the idea of a film adaptation has been on just about everyone’s mind, Kirkham told McHale he wanted Billy Bob Thornton to play him in a movie. “I think the one person that's been brought up is Billy Bob Thornton,” he said. “He might make a good Rick Kirkham.” A Tiger King film with the kid from Johnny Tsunami and Billy Bob Thornton? Yes, please, absolutely.