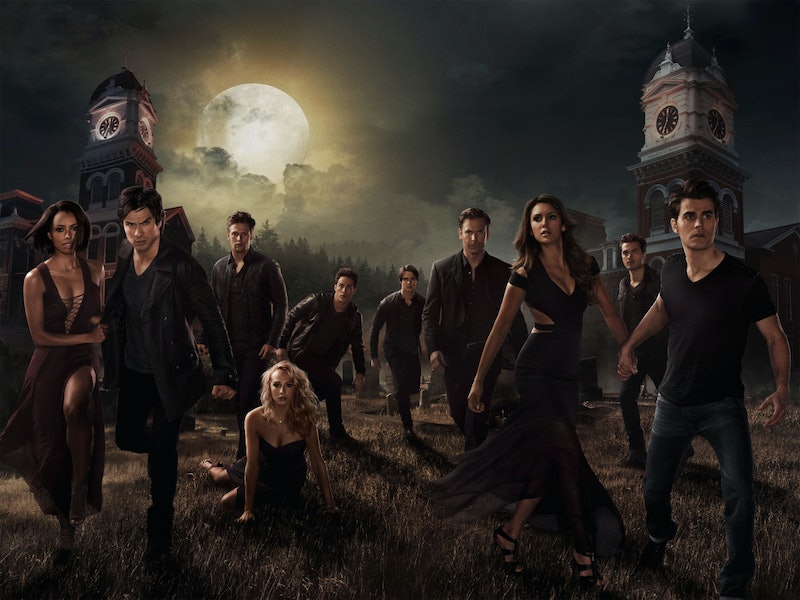 There are only two episodes left before the series finale of The Vampire Diaries "I Was Feeling Epic" airs on The CW March 10, and in classic TVD style, you can bet a lot of things are going to happen in these final three episodes. Over the past eight seasons, The Vampire Diaries has loved throwing fans for a loop and the dynamics between the main cast of characters has changed so much, who knows what showrunner Julie Pec's endgame is. Here are seven theories about the end of The Vampire Diaries that totally make sense given everything we've learned from watching the show.

Nina Dobrev has confirmed that she will return to The Vampire Diaries after almost two seasons away from the show, which means that whatever the ending to TVD is, it will likely involve Elena Gilbert in some way, as it really should. The show began as Elena's story, and though it has grown to be the stories of Stefan, Damon, Caroline, Bonnie, and Matt as well, it's only right that TVD end with Elena in some way. Of course, Dobrev's involvement in the series finale could mean anything. In anticipation of Dobrev's big return and the series finale of the show, let's break down the theories about the end of The Vampire Diaries that make sense.

Death is very much a part of The Vampire Diaries. And one major death has already been confirmed for the series finale. It's not a stretch to say that one death could happen at the beginning of the episode, and all other deaths might follow. TVD loves to lull fans into a false sense of security, especially when it comes to finales. I wouldn't be surprised if we were made to think some of our favorites from Mystic Falls survived, only to have them all die in the end.

2. All The Vampires Die & Go To Bonnie's Spirit World

Every single vampire on TVD is guilty of murder, which means that they will be going to Cade's hell once they die. (Assuming Cade and Hell are still standing at the end of Season 8.) However, in the most recent episode, "The Lies Will Catch Up To You," it was revealed that Bonnie created her own post-death dimension to hide Enzo from Cade. Should any Mystic Falls vampires die, it makes sense that instead of going to Hell, they'll end up in Bonnie's spirit world together. It's not an incredibly happy ending, but it's much happier than the alternative, and Matt and Alaric can live to take care of the twins and keep the Armory going.

Bonnie dying would make sense in that her life is linked to Elena's, so, in theory, for Elena to wake up from her eternal sleep, Bonnie would have to be dead. However, that really seems way too easy. My money's on Bonnie surviving, or at the very least, living until she dies of old age.

4. Elena Wakes Up As Katherine

When we last saw Elena's body, she was being magically abducted by Kai — not good. I wouldn't put it past him to use his witchy ways and somehow put Katherine's spirit back into Elena's body, just to mess with the Salvatore brothers. Yes, it's happened before, but how amazing would it be if Elena woke up, acting normal and getting her happy ending with Damon, only to have the last shot of the show reveal she's Katherine? It would be an ending worthy of the classic TVD cliffhangers, that's for sure.

5. The Twins Cure Everyone

Caroline and Alaric's twins are becoming more powerful by the second, and while I have no doubt they'll play a role in defeating Cade before TVD ends, I'm starting to think they might have another purpose. Right now, the vampire cure isn't really transferable, at least not quickly enough for the entire Mystic Falls vampire population to take it at once and turn human together. Moreover, the fact that taking the cure un-compels everyone that vamp has ever mind controls is a pretty big problem. If all the vampires are cured, then they will all be exposed. Unless there's another, witchy way the vampires can be cured, and that's where the twins come in.

I think that we can all agree, after everything she's been through, Caroline deserves her June Wedding. Whether it's to Stefan or somebody else, Caroline walking down the aisle in June would be a great ending for her character. It might not jive with the whole TVD themes of darkness and death, but it would be lovely. Also, someone's gotta have a happy ending, and it might as well be Caroline.

7. Stefan And Damon Die So Elena Can Live

For the most part, the Salvatore brothers have had nothing but the best intentions when it comes to Elena Gilbert. Alas, despite saving her life a handful of times, they have brought a lot of death and destruction into her life. In fact, one could argue that Elena would be living a normal, happy, human life if only she had never met Stefan and Damon all those years ago. It would be full circle if both Damon and Stefan sacrificed their lives for hers in the finale, allowing her to live out the rest of her human life without the hazards of being involved in a vampire love triangle. It would also be full circle for Damon and Stefan, who have essentially done everything together. Even when they were at each other's throats, they never stopped being brothers. Plus, it would be cruel for one of them to survive the finale and not the other. If one Salvatore brother goes, they both should go. And what better way than to die saving the woman they have both loved?

Of course, this being The Vampire Diaries, the best theory on how it will end is that it end in a way completely unexpected. If there's one thing TVD has always been good at, it's surprises. It wouldn't be the same Vampire Diaries we all know and love if the series finale wasn't full of a few jaw-droppers. I can't wait.