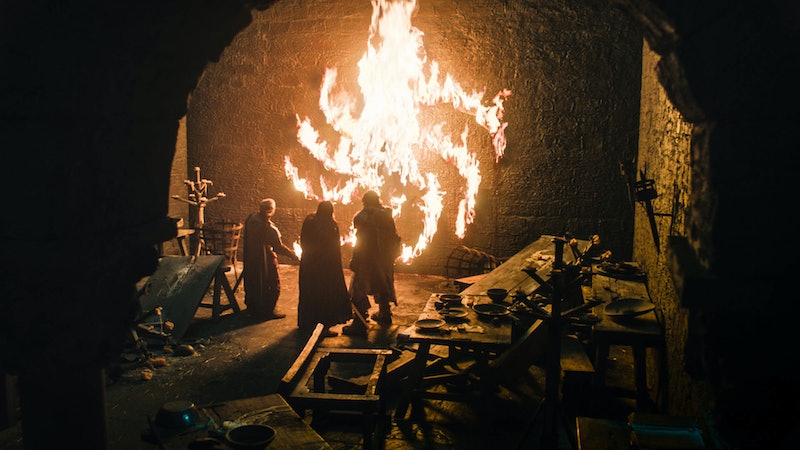 While a majority of the Season 8 premiere consisted of enjoyable but necessary set-up, one scene in particular has sent fan theorists into overdrive: the Night King's message on Game Of Thrones. When Tormund, Beric, and Dolorous Edd arrived at the Last Hearth, they found poor little Lord Umber nailed to the wall, with a pattern of severed limbs spiraling out from his corpse. When that corpse came back to life, Beric burned him with his flaming sword, causing the whole strange symbol to be engulfed in fire.

"It's a message from the Night King," Beric said. But what is that message? "His army's between us and Winterfell," Tormund replied. Maybe the message really was that simple — "The White Walkers were here" — letting anyone who discovered it know that the army of the dead was through the Wall and on its way to Winterfell. But fans are convinced that the symbol has a deeper, more cryptic meaning… they just can't agree on what that meaning is. Is it a clue towards the Night King's identity? A hint for how to defeat him? A warning of something even worse to come?

Let's theorize about what it could all mean.

1. The Night King Is A Targaryen

The most popular theory coming out of the Season 8 premiere is that the symbol means the Night King is a Targaryen. Some viewers seem to think that the spiral looks like that three-headed dragon of the Targaryen sigil, proving that the Night King belongs to that dragon-riding family. However, this is almost certainly nonsense: the Night King was created by the Children of the Forest thousands of years ago, while the first Targaryens only sailed to Westeros a couple centuries ago in the show's timeline, long after the Long Night and the original battle between the White Walkers and the First Men.

2. He Wants To Break The Wheel

Even if the symbol isn't meant to represent the Targaryen sigil, it could still be evocative of a particular Targaryen ethos — namely, Daenerys' desire to break the wheel. Some fans think the arms of the spiral look like the spokes of a wheel, and the burning of it symbolizes the complete destruction of Westeros' feudal system. If so, will Daenerys find herself sympathizing with the Night King's goal and aligning herself with him? Or will the Night King view Daenerys as just another spoke on the wheel to be destroyed? It would be ironic if Daenerys found herself undone by the very metaphor she espoused to Tyrion back in Season 6.

Fans have been speculating for years about what the Night King wants. He was made by the Children of the Forest to defend them against men, so is he really just a weapon gone haywire, determined to not stop until every man is dead? Or could he want something more than that? Given that the spiral symbol seems to originate from the stones around the weirwood tree where he was made, the Night King could be repeating that symbol as a way of communicating his desire to be un-made. By going back to his roots, perhaps he can find a way to return to his human form and finally rest after a millennium of tortured existence.

4. He Wants To Create A Successor

Similarly, maybe the Night King wants to rest not by being unmade, but by finding himself a successor. After all, "king" is usually just a title that's passed down from one ruler to the next. That could explain his obsession with Jon Snow; although the Night King and Jon have come face-to-face multiple times now, the Night King has continually spared Jon's life when he could have killed him. Is there something about Jon that makes him a prime candidate for becoming the new leader of the White Walkers? If the theory that the Night King is a Stark is true, he and Jon might even share a direct bloodline. If so, maybe the Night King wants to take Jon to that same spiral of stones and shove a dragonglass dagger into his heart, turning him into a White Walker and relinquishing his crown.

5. He's Coming For The Children Of The Forest

Perhaps, by referencing the place where he was created, the Night King is actually referencing the beings who created him. While it's generally assumed that his goal is to wipe out mankind, maybe his goal is actually to wipe out the Children of the Forest, out of vengeance for creating him. The Children are thought to have vanished from Westeros, with the last of them living only beyond the Wall, but book readers have a theory that there's one place in Westeros the Children could still be hiding. In the God's Eye, the lake outside Harrenhal, there's an island called the Isle of Faces, which is home to a grove of ancient weirwood trees, and is the place where the Children and the First Men signed the pact that ended their war. Could the Night King be headed there to wipe out the last of the Children?

6. He's Foreshadowing His Own Doom

Reddit user zyuko22 thinks that the symbol could have been a clue about how to defeat the Night King: if Ned Umber's body represents the Grand Weirwood tree at the center of the spiral of stones, then Beric burning his body could foreshadow that the tree will have to be burned in order to kill the Night King. And the fire spreading out from Ned's body and consuming the entire spiral could foreshadow that burning the Grand Weirwood would result in the destruction of all the weirwood trees in Westeros. The theory becomes bittersweet if you believe that the Grand Weirwood is the root of all magic in the world. Then, the only way to defeat the Night King would be to destroy magic itself, which would result in the deaths of all magical figures like Melisandre, Bran, and, yes, Dany's dragons. Maybe that's the sacrifice needed to defeat the White Walkers once and for all.

7. He's Warning Of An Impending Catastrophe

In another wild theory, Reddit user YanosAldrenn posits that the Night King is warning everyone about a cataclysm that is about to strike Westeros. One of the most famous events in the history of Essos is the Doom of Valyria; what if Westeros is about to experience its own doom? According to this theory, the weirwoods on the Isle of Faces were planted to forestall some natural catastrophe lurking beneath the surface of Westeros, and that burning the trees (like Beric burns Ned Umber) might unleash this disaster once and for all, which would spread out like the fire on the symbol and consume the entire continent. Whether the Night King is planning to cause or prevent this catastrophe is unclear — and whether our heroes will prevent it by killing him… or somehow bring about this disaster themselves in the efforts to stop him… is another agonizing question mark.

Will Game Of Thrones end in literal ice and fire, as the icy Night King unleashes a fiery cataclysm that destroys all of Westeros? That would certainly be one way to break the wheel. Fans only have five more episodes left to find out how this long saga will end.

More like this
This 'Black Panther' Character Is Starring In Her Own Marvel Show Next Year
By Grace Wehniainen
'Wakanda Forever' Is Already Opening Doors For Mabel Cadena
By Grace Wehniainen
How To Stream 'Black Panther: Wakanda Forever'
By Chloe Foussianes
A 'Grey's Anatomy' Alum Will Join Negan & Maggie's 'Walking Dead' Spinoff
By Alyssa Lapid
Get Even More From Bustle — Sign Up For The Newsletter