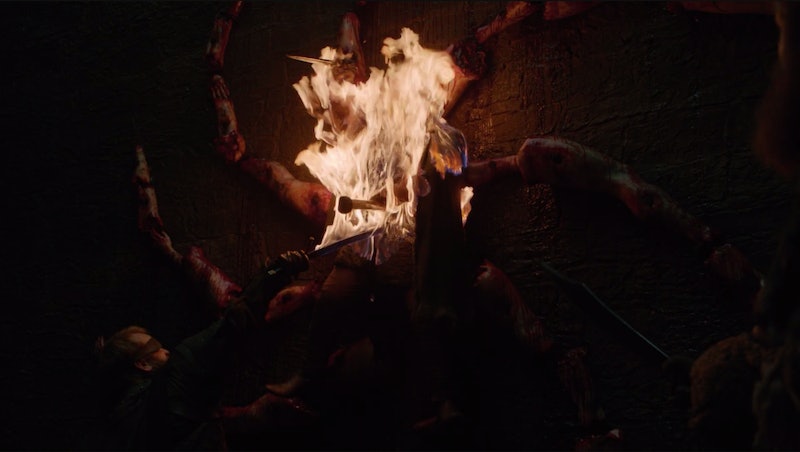 Par for the bloody course course, the Game of Thrones Season 8 premiere went out with a bang. Beneath Last Hearth, audiences saw a creepy, gory symbol, made out of human arms, with poor Lord Umber attached to the center. Beric Dondarrion explained that this was the Night King's symbol, which served as a warning for the rest of Westeros. That said, audiences may be confused as to what exactly the symbol stands for — if anything.

Much like the Queen of Bear Island, Lady Lyanna Mormont, Ned Umber is on the younger side. Audiences saw this young lord briefly in Season 7 when he swore fealty to Jon Snow, King in the North. Unfortunately, his reign was a short-lived one, and the Night King took advantage of his vulnerability. Umber's body was tacked to the wall beneath his fort as a message to the rest of Last Hearth.

"His army's between us and Winterfell," Tormund comments, referring to the Night King. They devise a plan to set out for Winterfell on horseback, in order to outrun the undead army. As Insider pointed out, the Umber fortress, Last Hearth, is the northernmost fort in Westeros, alongside House Karstark's Karhold. This means that if the Night King has already made it there, it won't be long until the White Walkers show up on Jon Snow's (or should we say Aegon Targaryen?) front door.

But because these are the White Walkers we're talking about, poor Lord Umber didn't stay dead, and the boy opened his eyes and attempted to attack Tormund, Beric, and the rest of the soldiers investigating the disturbance. They were forced to set the young boy on fire, lighting up the arms, as well, which had been arranged in a swirl pattern.

But what does the swirl mean, exactly? Some viewers, like Reddit user illuminadii pointed out that the symbol looked like the Targaryen sigil, which features a three-headed dragon. However, the more likely explanation is it's the symbol the White Walkers are fond of making in order to make their presence known. HallucinoJER posted this screenshot to the Game of Thrones subreddit, which depicted horse bodies arranged into a spiral North of the Wall. Furthermore, user amoraray posted a still depicting the same symbol carved into the cave beneath Dragonstone. Still others said it could represent the Children of the Forest, like Twitter user Christian. So while we may not know what the symbol means yet, audiences have certainly seen it before.

So whether or not audiences ever get any confirmation on what this symbol really means, the Night King certainly sent a message with his gory installation art. Now, hopefully Tormund, Beric, and the rest of the Night's Watch will be able to make it to Winterfell before the White Walker army. Because if there's anything that the undead love to do, it's displaying body parts into surprisingly artistic patterns, and they wouldn't hesitate to do the same thing to everyone in Westeros.