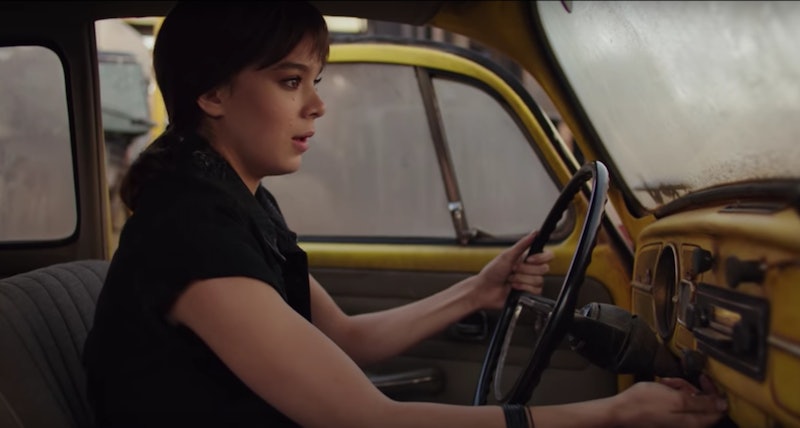 Look, I'm not going to lie, I'm a fan of the first Transformers movie from 2007. As someone who played with her older brother's Transformers toys as a kid and caught the cartoon in reruns, for me, the movie was a fun, nostalgic romp. Shia LeBeouf was in his funny, charming prime. The robots designed for the movie were super cool updates of the cartoon originals. And even the movie's stereotypical sex symbol female character, Mikaela, played by Megan Fox, was smart, brave, and was a mechanical genius. But hoo boy, did the Transformers movies just go downhill from there.

Transformers: Revenge of the Fallen featured Decepticon twins who were accused of perpetrating racial stereotypes, in addition to its grotesque robot testicles. Dark Side of the Moon simply replaced Mikaela with another gorgeous young woman when Fox left the franchise. (An anonymous source told The Wrap she departed because of director Michael Bay's alleged "abusive" behavior, which Fox herself never confirmed.) Age of Extinction sexualizes an underage girl while her father and too-old-for-her boyfriend fight over who gets to save her. And good grief did anyone even see the fifth one? Oh right, that was the one with the bait and switch where the hero was supposed to be its female character but instead she's just revealed to be a damsel.

Thank goodness for Bumblebee, the sixth installment, which hit theaters on Dec. 21. Here are all the ways through which the latest Transformers flick undoes the sins of the previous movies:

1. Bumblebee Has A Female Lead

Bumblebee stars Oscar-nominated actor Hailee Steinfeld as Charlie, an 18-year-old woman mourning a great loss while trying to find her place in the world. The 1987 setting means Charlie has an eclectic taste in music and dresses like a punk. As a gearhead and expert mechanic, she feels inspired by Mikaela, but without the sexualized trappings of all of the other Transformers movies. Of playing Charlie, Steinfeld says in the movie's press notes, "It truly feels like we made something special."

2. It Was Written By A Woman of Color

Christina Hodson, who is half-Taiwanese, is the first woman to write a screenplay in the Transformers universe. She's also penning the upcoming Margot Robbie Harley Quinn movie, Birds of Prey (And the Fantabulous Emancipation of One Harley Quinn), and the Batgirl movie for DC. Of Charlie's characterization, Hodson says in the press notes, "I love seeing girls going on adventures, and I wanted to create a female character who didn't fit into stereotypical boxes. I think one of the things that makes Charlie feel like an outsider is that she isn't just one thin. She's a bit nerd, a bit tomboy, and a bit athlete."

3. It Passes The Bechdel Test

Though passing the Bechdel test (when a movie has at least two named women who talk to each other about something other than a man) isn't necessary for a film to be good or feminist, passing is always a plus. Bumblebee's other prominent human female character is Charlie's mom Sally, played by the hilarious Pamela Adlon, of the TV series Better Things. Most of Charlie and her mom's conversations revolve around Charlie's well-being, her stagnation in life, and their shared struggles.

While Transformers: Revenge of the Fallen kind-of-but-just-barely featured the Arcee sisters, a trio of Autobots who transform into motorcycles, Bumblebee is the first movie in the franchise with a female transformer as a lead who isn't regulated to the background. The character is a Decepticon named Shatter voiced bombastically by the amazing Angela Bassett.

She's a "triple-changer," who can transform into a cherry red 1972 Plymouth Satellite as well as a fighter jet. She convinces Earth's military to let the Decepticons use their satellites. She's clearly the brains of the villainous duo, with the brawn Dropkick, a 1974 AMC Javelin and helicopter, voiced by Justin Theroux. "She is boss. She is bad. She is bold and unapologetic," Bassett says about Shatter in the press kit, "and yet she's pretty calm cool and collected."

5. It Addresses Mansplaining & The Awful Idea That Women Need To Smile More

Charlie is going through a lot, and isn't always in the brightest of moods throughout Bumblebee. But when her doofy step-father Ron (Stephen Schneider) tries to give her advice, it comes out like the worst kind of mansplaining. He literally gives her a book titled Smile, that claims that people who smile are more approachable and have more friends. Ron is ultimately harmless and becomes a great asset to Charlie later in the film, but his cluelessness in that moment highlights just how much of a no-no it is to tell women they should smile more.

6. It Features A Young Woman Saying No To A Boy's Advances & Him Not Making A Big Deal About It

Throughout the movie, Charlie has a flirtation going on with her new friend Memo, played by Jorge Lendeborg Jr. Memo is a sweet kid who obviously likes Charlie a lot, but he doesn't get creepy about it. At the end of the movie, after they've been through a huge ordeal, Memo tries to hold Charlie's hand, only for Charlie to tell him she's not ready for that just yet. Memo backs off without a big deal, and the moment is an important message about boundaries and consent.

Throughout the other Transformers movies, the robots are pretty much archetypes that don't change much over the course of each film. Optimus Prime is always going to be a noble hero, and we don't learn much about the inner workings of any of the robot characters, really. But by focusing on one beloved yellow Autobot, this movie is able to go deeper and allow for more nuance. Bumblebee has moments of self-doubt, self-discovery, and develops a protective relationship with Charlie that makes for a character arc unexplored by any of the other Transformers movies.

By making up for the franchise's past mistakes, putting more women front and center, and actually having an emotionally compelling story, Bumblebee might just be the best Transformers movie yet.

More like this
The 'Hocus Pocus' Sequel Finally Has A Release Date & It Makes Total Sense
By Shannon Barbour and Radhika Menon
'Elvis,' 'Walk The Line' & 10 Other Movies Where The Actors Actually Sing
By Radhika Menon
Everything To Know About 'My Big Fat Greek Wedding 3'
By Grace Wehniainen
Alicia Silverstone Has Recreated An Iconic 'Clueless' Scene
By Frances Stewart
Get Even More From Bustle — Sign Up For The Newsletter