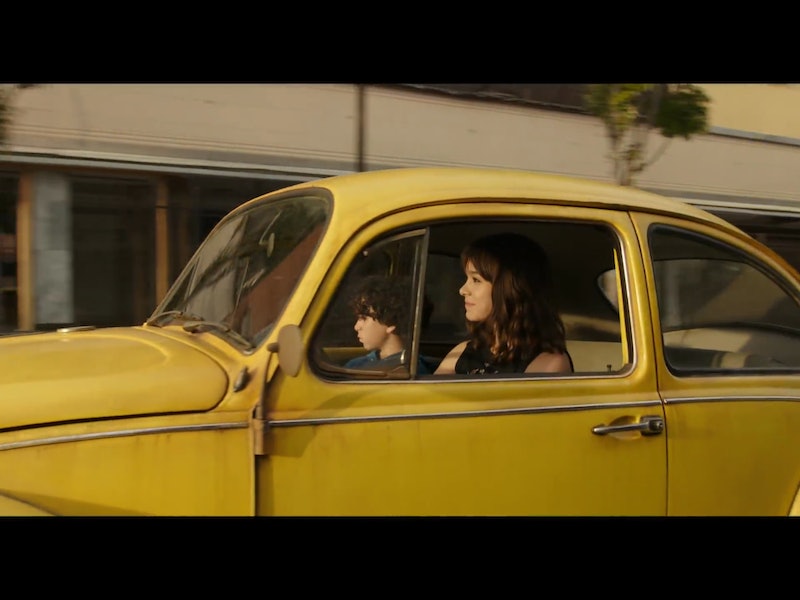 Who would've thought that an action movie about a transforming Volkswagon Beetle saving the world could evoke so many emotions? Well, the trailer for the Transformer's spinoff Bumblebee shows Hailee Steinfeld taking the lead in the universe, and it totally does just that.

Set in 1987, the film brings fans of the franchise back to its original roots, with Bumblebee taking on more of a softer and cuter edge than its 00s films portray, while at the same time, accentuating the emotional connections and closeness Steinfeld's character, Charlie, and Bumblebee will seemingly foster throughout. But of these mere examples aren't the only tell-tale signs that shine in the trailer, however. The Paramount Pictures' production has a couple more packed within its two-and-a-half minute trailer, all being tearjerkers in their own right.

As if you needed another reason to get attached to Bumblebee prematurely, the sound of late-comedian Bernie Mac's voice describing the love-at-first-sight experience between man and its car just may do the trick. Those familiar with the franchise will remember the King of Comedy as the Hawaiian shirt wearing candid carsalesman who sells Sam (played by Shia Lebeouf) his first car. In the trailer, Mac's infamous line, "the cars pick their drivers. It’s a mystical bond between man and machine," rings softly in the background just as Steinfeld's character is seemingly introduced to the dusty Volkswagen, delivering the perfect dose of nostalgia to Transformers' fans everywhere, no matter when they first discovered the franchise.

Speaking of nostalgia, there's no better way to illustrate the '80s scene than with its music, and from the looks of the trailer, that's exactly what Bumblebee plans to do. In an attempt to get Bumblebee to know just how much she feels for the metal superhero, Steinfeld's character pops in a cassette and blasts Rick Astley's "Never Gonna Give You Up" to set the mood. And though only for just a moment (before the Autobot totally rejects the summer 1987 hit), it set the spinoff apart from its action-driven predecessors, giving off a rich and warm tone.

Bumblebee follows the life of a newly-turning 18-year-old California girl named Charlie (Steinfeld), who forms an unexepected, yet close-knit bond with the Autobot. Steering from the Michael Bay helmed films which came prior to this prequel, Bumblebee will seemingly hone in on the relationship between Charlie and Bumblebee than that off the Autobot's enemies. That's not to say that Bumblebee won't be action-packed in its own right, however. In fact, the Travis Knight directed spinoff wouldn't be in the same company of other female-led action flicks slated to dominate box offices — such as Fury Road, Captain Marvel, and Tomb Raider.

Aside from Bumblebee, Steinfeld has a few other projects up her sleeve that are sure to be industry hits, as well. It was just announced that the singer and actor will be starring in Apple's upcoming comedic-drama exploring the hilarious and feministic nuances of famous poet's Emily Dickinson's life, entitled Dickinson. And when it comes to the music, Steinfeld is said to be in the studio working on her very first LP, which, if anything like her powerful 2015 single "Love Myself," is going to take the world by storm. Before her current works, however, Steinfeld delivered critically-acclaimed performances in True Grit and The Edge of Seventeen, both of which earned her Oscar and Golden Globe nominations.

Needless to say, with her experience and professionalism in tow, Steinfeld is sure to make the world fall in love with her all over again in Bumblebee. And set for a Dec. 21 release, the highly-anticipated spinoff is going to be the perfect addition to the Christmas season.