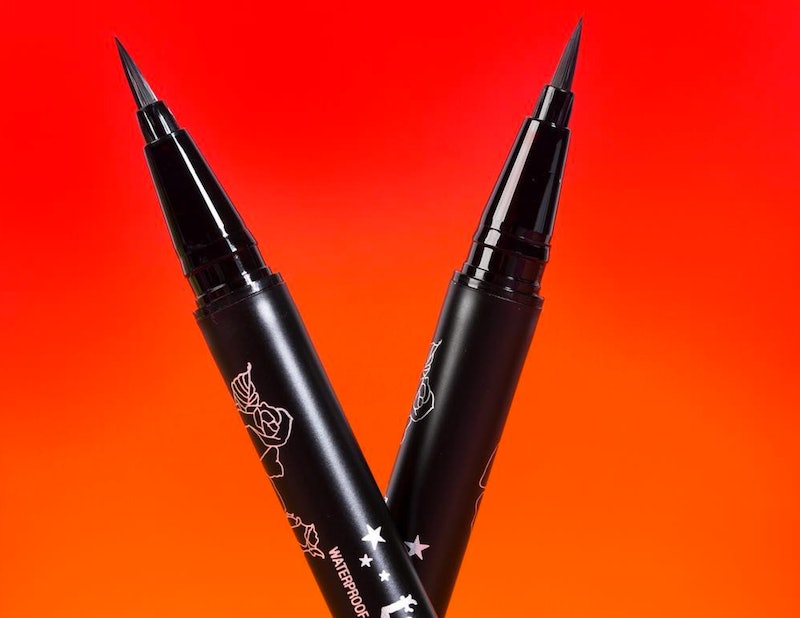 Self-proclaimed California makeup enthusiast Landon Hudspeth is 19 and claims in his Insta bio that "I don't actually know what I'm doing." I beg to differ. Kat Von D posted one of his looks, where the nascent vlogger used Kat Von D signature black Trooper Tattoo Eyeliner, which is one of my go-to black liquid liners, to create the most unusual eyeliner flick I have ever seen.

But he's not the only online makeup artist, budding or otherwise, to use this liner to create something other than a "basic" flick.

Hudspeth utilized Trooper in a way I've never seen or even thought of! It's a cupped hand, the details of which are phenomenal. The fingers, the angle, the everything. The effect is that of an elongated wing, using the curve of the hand to extend the eyeliner past the line of the eye.

Overall, achieving the perfect wing or cat-eye flick takes loads of practice. I do a flick all the time and there are days when I absolutely hate the result because my wing is totally bunk. But I console myself with the notion that there is always tonight's makeup remover and tomorrow's second chance at a new flick.

As noted, Hudspeth and others aren't even bothering with "normal" wings when using KVD's signature eyeliner, which may be getting a more matte version.

Here are seven times super creative makeup artists and vloggers have used KVD's Trooper eyeliner for something beyond the wing.

Here's Hudspeth's handiwork. I am not even going to try and copy it… because I am not an artist and the detail here is maj. I don't have this sort of refined skill. Not. Even. Close. However, the tip of the Trooper liner is fine enough to generate this sort of detail. Hudspeth even joked in the hashtag that it took 10 tries to get it right. Landon's Insta account is incredibly new and he mostly posted selfies of himself wearing eyeliner or doing a cut crease. Then he went and did this!

Kelseyanna Fitzpatrick, who is part of the newly-launched KVD Artistry Collective, used Trooper to do a negative space liner look and to add a faux tattoo of a star to her upper cheekbones. Technically, she still did a wing, but it's the negative space element that has me all like "OMG."

She has mad skills in so many ways. Brilliance!!

Stephanie Strazzere, another KVD Artistry Collective member, used Trooper to help create this Double Slime lip look. Eyeliner — it's not just for eyes anymore. This design is sorta Kylie Cosmetics logo-ish and Day of the Dead-like, but totally unique and fresh. It's also utterly amazing.

Yes, Strazzere also used Trooper for this lip swirl x lollipop style. There is some serious detail going on here and it reminds me of The Joker and graphic novel aesthetics. I am once again bowing down in awe of this kind of talent and vision!

This crazy talented makeupista was going for daisies, but noted in her caption that she felt like she ended up with a "cracked eggs" look. OMG, no way, sister! This eye look is totally floral, in bloom, and ready for spring. It also has a '60s vibe. This repurposing of the KVD liner is striking since it's fun to see someone use KVD liner for a light and bright pursuit rather than the usual (and totally acceptable) dark 'n' gothic designs.

OMG! Not worthy — that's what we are. Check out the insanely careful and fine detail in this Frida Kahlo-inspired eye look. If I was capable of creating such a work of art, I'd never use eye makeup remover! This is true makeup artistry and it was crafted with an assist from Trooper.

KVD's makeup brand is so aligned with music, since Kat herself is such a rock and metal music fan. It's no wonder that she inspired this wonderful makeup artist to do a musical, Depeche Mode-inspo eye look. Here's me, picking my jaw up off the floor. I'm in total awe.

These seven designs are proof of the power of Trooper.