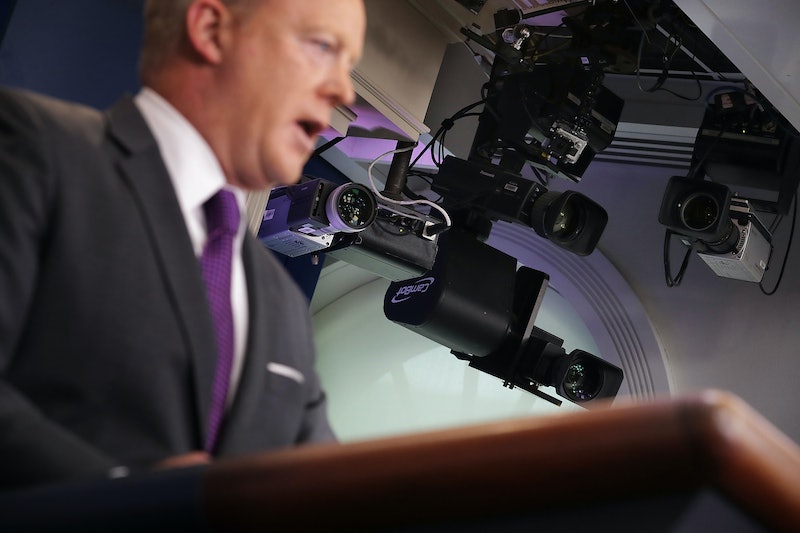 On Friday, White House Press Secretary Spicer resigned from his post after six months on the job. Spicer said that it was an "honor" and a "privilege" to serve under President Trump, and Trump praised Spicer for "his great television ratings." However, Spicer's tenure was a rocky one, and on more than one occasion, Spicer's defenses of Trump failed spectacularly.

For months, rumors had swirled that Spicer was on his way out of the White House. It began in February, when CNN reported that Trump was unhappy with Spicer's performance in his first few weeks on the job. In May, the Wall Street Journal reported that Trump was considering replacing Spicer, and Trump himself refused to say that Spicer "will be there tomorrow" as press secretary. In June, Spicer began holding his briefings off-camera, and POLITICO reported the same month that Spicer was actively searching for his own replacement. The White House announced Friday that the new White House Press Secretary will be Sarah Huckabee Sanders.

Spicer's time on the job was marked with controversy and derision, and he became a regular source of parody on Saturday Night Live, where he is played by Melissa McCarthy. On many occasions, his attempts to defend the president backfired significantly. Here are a couple of them.

Spicer gave his first press briefing shortly after Trump's inauguration in January. Although aerial photographs depicted an inauguration crowd far smaller than the audience for Barack Obama's first swearing in, Spicer said that this was not the case.

"This was the largest audience to ever witness an inauguration, period," Spicer said. Undercutting his own argument, Spicer said in the same press conference that "no one had numbers" regarding the exact number of people who attended Trump's inauguration.

The Washington Post gave Spicer's claim "Four Pinocchios," and said that it amounted to "an appalling performance by the new press secretary."

In January, Spicer was asked at a press briefing whether he would "always tell the truth from that podium," and if he'd pledge to never knowingly say something that he didn't believe to be factual.

"I believe that we have to always be honest with the American people," Spicer said. However, he added that "sometimes we can disagree with the facts."

In February, CBS News reported that Trump's pick to serve as Secretary of the Navy, Philip Bilden, was "on the verge" of withdrawing his nomination. In a tweet, Spicer said that CBS's sources "would be wrong," and that Bilden "is 100% commited [sic] to being the next SECNAV pending Senate confirm."

In actuality, Hitler used chemical weapons extensively, with Nazi Germany gassing approximately 6,000 Jews every day at the height of the Holocaust. Spicer later apologized for his remarks.

In May, Trump sent a cryptic and seemingly half-finished tweet that ended with the non-existent word "covfefe." The Internet was abuzz about what seemed to be an uncorrected typo, but Spicer insisted that it was no accident.

"The president and a small group of people know exactly what he meant," Spicer said in an off-camera press briefing. In audio of the briefing, the reporters in attendance could be heard laughing at Spicer's claim.

Is It A Travel Ban?

After Trump restricted citizens from seven Muslim-majority countries from entering the U.S., Spicer pushed back against the claim that the policy was a "travel ban."

"It's not a travel ban," Spicer said from behind the podium.

Months later, Trump himself contradicted Spicer, referring to the policy as a "travel ban" in multiple tweets. In one instance, the president said that "the lawyers and the courts can call it whatever they want, but I am calling it what we need and what it is, a TRAVEL BAN!"

As the controversy surrounding Trump's Russia connections began heating up, many started scrutinizing the role of Paul Manafort, Trump's former campaign manager who has reportedly worked for pro-Russian politicians in Ukraine.

But Manafort served as Trump's campaign manager, perhaps the highest-ranking positions in a campaign, for three crucial months. He was the head of Trump's delegate gathering operation before the primary was over, and was campaign manager when Trump accepted the Republican nomination in July.

Spicer will remain on the job until August.